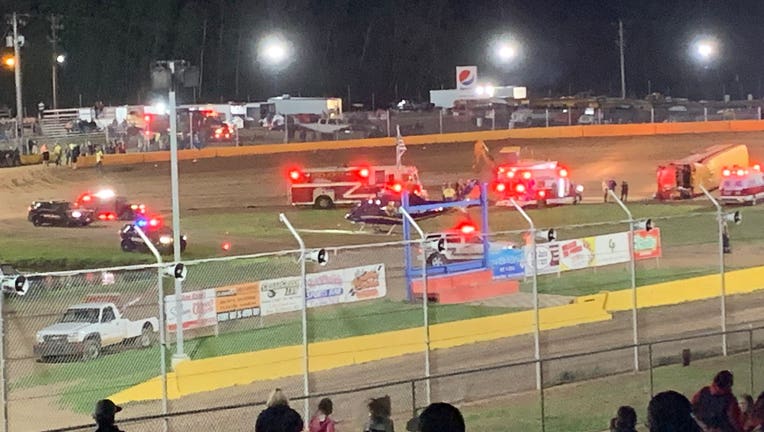 NEW RICHMOND, Wis. (FOX 9) - A man died Friday night after a school bus rolled onto him at the Cedar Lake Speedway in New Richmond, Wisconsin.

According to the St. Croix Sheriff’s Office, during the season opener, a safety crew member was clearing the track during the school bus races when a damaged bus rolled onto him. He died at the scene. The man was identified as 62-year-old Edward Nicholson.

A man died Friday night after a school bus rolled onto him at the Cedar Lake Speedway in New Richmond, Wisconsin.

"We said a quick prayer for the track worker, his family, his friends and the first responders that were there because that must have been a really horrible incident to witness and to be part of," said Kelly Gunderson, who was in attendance Friday night.

Gunderson said paramedics were on the scene of the crash within seconds.

"That they had to call in a medical helicopter is extremely serious, of course, but once it hadn't left after about 15 minutes, we all had kind of a sense of dread, that perhaps the person that was injured hadn't made it," she recalled.

It was the speedway’s first race since the Wisconsin Supreme Court struck down the governor’s safer at home order earlier in the week. The speedway cancelled races scheduled for Saturday night.

"That whole community at Cedar Lake Speedway is really a family," Gunderson said. "I got a sense of that too when I got there. The ticket sellers, the ticket takers, the concession workers, track security, track employees, everyone was just happy to be there and you really got a sense of community between that."

FOX 9 has learned that races are tentatively planned to resume next Saturday. All of this Saturday's races have been cancelled.

Cedar Lake Speedway is mourning the loss of a long time member of our racing family. Eddie Nicholson died from injuries sustained while clearing the track of an incident.

Our thoughts and prayers are with his friends and family during this very difficult time. Thanks to all of the emergency personnel that responded Friday night. Eddie will be greatly missed.