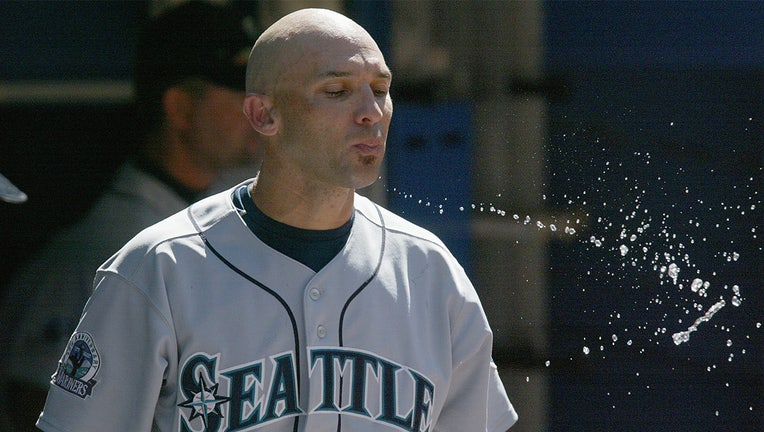 Raul Ibanez #28of the Seattle Mariners spits against the Toronto Blue Jays during their MLB game at the Rogers Centre September 1, 2007 in Toronto, Ontario. (Dave Sandford/Getty Images)

NEW YORK - Major League Baseball will look somewhat like high school ball this year under protocols to deal with the new coronavirus, with showers at ballparks discouraged and players possibly arriving in uniform, like they did when they were teenagers.

Team personnel will be banned from eating at restaurants on road trips.

Even the Phillie Phantic and Mr. Met will be missing, banned from the field along with all other team mascots.

The traditional exchange of lineup cards would be eliminated, along with high-fives, fist bumps, and bat boys and girls, according to a 67-page draft of Major League Baseball’s proposed 2020 Operations Manual. A copy was sent to teams Friday and obtained by The Associated Press. The guidelines, first reported by The Athletic, are subject to negotiation with the players’ association.

Teams will be allowed to have 50 players each under the plan, with the number active for each game still be negotiated.

Spitting is prohibited along with water jugs and the use of saunas, steam rooms, pools and cryotherapy chambers. Hitting in indoor cages is discouraged, batting gloves encouraged.

Batting practice pitchers are to wear masks, dugout telephones disinfected after each use. Players may not touch their face to give signs, and they’re not allowed to lick their fingers. Teams are encouraged to hold meetings outdoors, players spread apart.

Teams were asked to respond with their suggested input by May 22. The protocols were written by MLB senior vice presidents Patrick Houlihan, Bryan Seeley and Chris Young, and vice president Jon Coyles. Young is a former pitcher who retired after the 2017 season.

Protocols include details on testing for team staff, who are divided into three tiers. All others may not enter clubhouses, dugouts and the field.

Seats in the empty stands near the dugout should be used to maintain distance, according to diagrams in the manual, and the next day’s starting pitcher can’t sit in the dugout. Everyone must keep their distance during “The Star-Spangled Banner” and “God Bless America,”

Fielders are “encouraged to retreat several steps away from the baserunner” between pitches. First and third base coaches are not to approach baserunners or umpires, and players should not socialize with opponents.

Managers and coaches must wear masks while in the dugouts. The entire traveling party -- including players -- must wear personal protective equipment while on buses and flights. Restaurants are off limits on the road, including the ones in hotels, as are hotel fitness centers.

“We emphasize that this is a first draft, and will undergo several rounds of changes as we collect comments and suggestions from the clubs, the players’ association, players, and government officials,” deputy commissioner Dan Halem wrote in an email to owners, team presidents and CEOs, and general managers that accompanied the protocols.

“The document is designed to set minimum standards and identify best practices, but we have attempted to provide clubs with enough flexibility to achieve the desired health and safety objectives in a manner that is tailored to their particular circumstances, including ballpark configuration, location, and the nature of any local governmental regulations or restrictions,” Halem wrote.

Scoreboard video is prohibited but music allowed. While there won’t be fans, at least not at the start, it will provide a familiar background audio for the telecasts critical to MLB’s bottom line.

A ball will be thrown away after it is touched by multiple players, and throwing the ball around the infield will be discouraged. Personnel who rub baseballs with mud for the umpires must use gloves.

“Individuals must avoid any physical interactions (such as high-fives, fist bumps, or hugs) while at club facilities,” the manual says.

Tier 1 people in the plan include players, managers and coaches plus two each from among physicians, athletics trainers and bullpen catchers plus one strength and conditioning coach.

Players must wear masks while in restricted areas “except while on the field or engaging in other strenuous activities” and lockers must have at least 6 feet between them. If needed, temporary clubhouse space will be added, preferably outdoors or areas with better ventilation.

“Showering in club facilities should be discouraged,” the plan says. “To the extent showering occurs, clubs should explore modifications to facilities to allow for physical distancing and hygiene” such as installing partitions and limiting the number of players using the showers at the same time.

Teams “should consider requiring (on-field staff) to arrive at club facilities dressed for the day’s activities in order to limit time spent in the clubhouse or locker room.”

There will be staggered reporting dates for the resumption of spring training. When pitchers and catchers arrive, only five players may work out at a time. Then come full team workouts, with small groups encouraged but not required, followed by exhibition games. There will be intake screening upon arrival followed a self-quarantine for 24-48 hours until results are available. Players not assigned to big league team when the season starts will remain at spring training or another separate facility.

All games at spring training facilities in Florida and Arizona, whether exhibition or regular season, must be scheduled for 7-9 p.m. local time unless MLB gives specific consent.

A fifth umpire would be allowed when the temperature reaches a certain level, allowing for rotation, including sharing of plate umpire duties, Teams should take batting practice on back fields.

Among the road trip changes:

—Use of Uber, subways and public buses is banned.

—Private airports encouraged and if not available, teams are to use private aviation facilities to board and exit.

—Transportation Security Administration screen should take place at ballparks if it can be arranged.

—Lower floors are to be used if possible at hotels, so stairs can be used instead of elevators, and private areas arranged for entrances, exits and check-in.

—Six staggered bus trips will be scheduled to and from the ballpark.

Team staff, including players, will be given thermometers for self screening and are to take two tests in quick succession each morning.

At the ballpark, people will be given temperature checks twice a day and multiple fluid swabs each week. Comprehensive Drug Testing will collect samples and Sports Medicine Research and Testing Laboratory in Salt Lake City is to provide results within 24 hours.

Family members of players, umpires and the households of anyone covered under the plan will be offered access to testing and PPE. The individuals are encouraged to avoid crowd when away from ballpark.

Anyone with a temperature of 100 or higher or who exhibits COVID-19 symptoms or has come in contact with someone confirmed to be infected will be subject to rapid testing at a nearby site. A person cannot rejoin the team until testing negative twice in tests taken at least 24 hours apart. The person also must not exhibit symptoms or COVID-19, and the team physician and MLB medical staff must determine the person not at risk.

If an individual is exposed to a person with an infection, that person must show no signs of disease, be tested daily for at least seven consecutive days and undergo more frequent temperature checks. The person also must wear a mask at all times except while on the field.

Each spring training and regular season ballpark must have dedicated testing and isolation areas. MLB also will offer testing of people who live in same household as covered individuals and to health care workers/first responders in big league cities.

Most tests will take saliva but there may be oral or nasal swabs. Blood samples will be collected less frequently for serology testing used to detect antibodies.