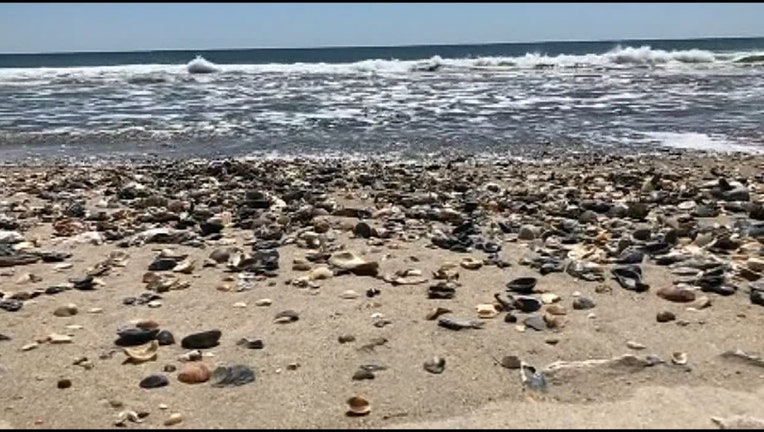 OUTER BANKS, N.C. - A man in North Carolina is being praised for jumping into action when he heard screams from two children and pulled them from a rip current in the Outer Banks on Friday, according to officials.

Cape Hatteras National Seashore said in a news release that Dare County resident Jeffrey Del Monte was driving in an off-road vehicle with his wife and friend late Friday afternoon along the beach near Ramp 49 in Friso when they heard the "screams of children" in addition to "panic on the beach."

"As they surveyed the water trying to locate the screams, two young girls were spotted apparently struggling while being swept out in a rip current," park officials said.

Del Monte then swam out into the ocean and helped one of the girls who was caught in the rip current, passing her to his friend for the "lengthy swim" back to shore.

He then went back searching for the second girl and found her "in distress" before he swam back to shore, bringing the child to the beach from nearly 100 yards out.

“Jeffrey Del Monte’s heroic, selfless, and prompt actions were critical to saving these two girls from a very dangerous situation,” National Parks of Eastern North Carolina Superintendent David Hallac said in a statement. “I am thankful for his courage and expertise which allowed him to perform this successful ocean rescue.”

After both girls were safely on the beach, Del Monte and his friend tended to them until Dare County Emergency Medical Services and a Cape Hatteras National Seashore Ranger arrived on the scene.

Park officials said the incident is a reminder of how quickly ocean conditions can change, even on what appears to be a perfect day.

"A perfect day on the beach doesn’t always mean that it’s a perfect day in the ocean, so it is critically important that all visitors check the beach forecast for hazards and rip currents before heading to the beach and always use something that floats when in the water," the seashore said in a news release.

If individuals do find themselves caught in rip currents, officials urge to not swim against the current, instead swimming out of the current and then to shore.

Rough surf and rip currents will continue along the Southeast and mid-Atlantic coasts for the next few days as Arthur moves into the ocean and transitions to a non-tropical low on Tuesday.

"These swells could cause life-threatening surf and rip current conditions," the National Hurricane Center (NHC) said.

North Carolina Gov. Roy Cooper has urged residents along the coast to pay close attention to the storm and “don’t take chances in dangerous surf.”

"Beach visitors should use extreme caution in and near the ocean and stay out of the water while rip current risks are elevated," the seashore said in a statement.