North Korea fired projectiles toward its eastern sea Wednesday, South Korea's military and Japan's government said, in an apparent display of its expanding military capabilities ahead of planned nuclear negotiations with the United States this weekend.

SEOUL, South Korea (AP) - North Korea fired projectiles toward its eastern sea Wednesday, South Korea's military and Japan's government said, in an apparent display of its expanding military capabilities ahead of planned nuclear negotiations with the United States this weekend.

South Korea's Joint Chiefs of Staff did not immediately confirm what the weapons were, how many were fired or how far they flew.

But Japanese Chief Cabinet Secretary Yoshihide Suga said the North fired two ballistic missiles from the country's east coast, and one of them appeared to have landed inside Japan's exclusive economic zone off its northwestern coast. There were no reports of damage to Japanese vessels or aircraft traveling in the area, he said. The North had not fired a weapon that reached inside Japan's EEZ since November 2017 at the height of an unusually provocative run in nuclear and missile tests. 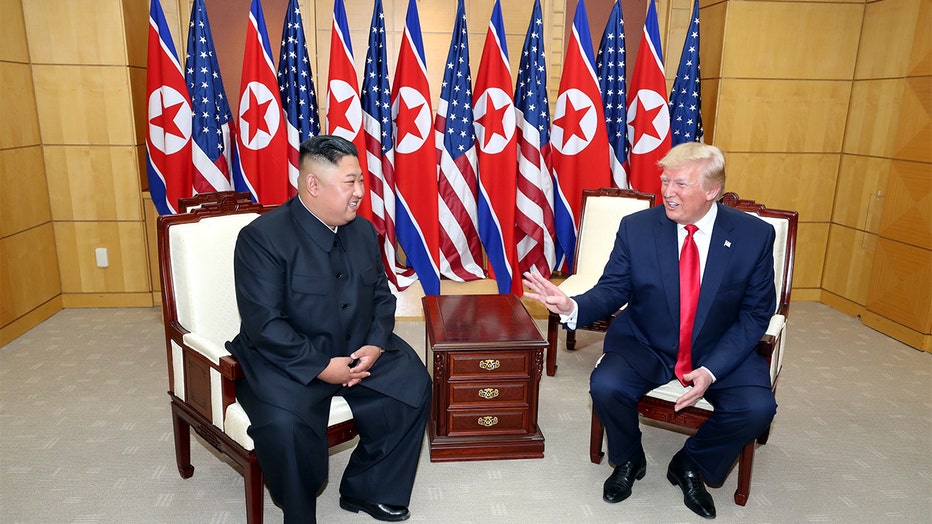 A handout photo provided by Dong-A Ilbo of North Korean leader Kim Jong Un and U.S. President Donald Trump attend a meeting on the south side of the demilitarized zone (DMZ) separating the South and North Korea on June 30, 2019 in Panmunjom, South Ko

"We will continue to cooperate with the U.S. and the international community and do the utmost to maintain and protect the safety of the people as we stay on alert," Abe said.

The launches, which were the North's ninth round of weapons tests since late July, came hours after a senior North Korean diplomat said North Korea and the United States have agreed to resume working-level nuclear negotiations this weekend.

After supervising a testing firing of what the North described as a "newly developed super-large multiple rocket launcher" last month, North Korean leader Kim Jong Un was quoted by state media as saying that the system would require a "running fire test" to complete its development.

North Korea could also be demonstrating its displeasure over South Korea displaying for the first time some of its newly purchased U.S.-made F-35 stealth fighter jets at its Armed Forces Day ceremony on Tuesday. The North has called the F-35 purchases a grave provocation that violate recent inter-Korean agreements aimed at lowering military tensions.

Kim Dong-yub, an analyst from Seoul's Institute for Far Eastern Studies and a former military official who participated in inter-Korean military talks, said the North's launch was clearly aimed at increasing pressure on Washington ahead of planned weekend talks where it might demand concessions on U.S.-led sanctions against its crippled economy.

Nuclear negotiations halted following a February summit between Kim Jong Un and President Donald Trump in Vietnam that broke down after the U.S. rejected North Korean demands for broad sanctions relief in exchange for partially surrendering its nuclear capabilities.

North Korea's subsequent belligerent rhetoric and recent short-range weapons tests have been seen as an attempt to gain leverage before resuming the negotiations.

In a statement released through state media, Choe Son Hui, North Korea's first vice minister of foreign affairs, said the two nations will have preliminary contact on Friday before holding working-level talks on Saturday. She did not say where it would take place.

"It is my expectation that the working-level negotiations would accelerate the positive development of the DPRK-U.S. relations," Choe said in the statement, using an abbreviation for North Korea's formal name, the Democratic People's Republic of Korea.

State Department spokeswoman Morgan Ortagus, who is traveling with Secretary of State Mike Pompeo in Rome, said later she did not have further details to share about the meeting.

The 2004 disarmament of Libya is seen by North Korea as a deeply provocative comparison because Libyan leader Moammar Gadhafi was killed following U.S.-supported military action in his country seven years after giving up a rudimentary nuclear program that was far less advanced than North Korea's.

The office of South Korean President Moon Jae-in, who lobbied hard to set up the first summit between Kim and Trump last year in Singapore, welcomed Choe's announcement and expressed hope the resumed talks would result in "substantial progress" in denuclearization and peace.

That could be a tall order. The diplomacy between Trump and Kim has been driven chiefly by their personalities rather than an established diplomatic process, and working-level meetings have fleshed out the logistics of summits without bringing the countries closer to any nuclear agreement.

The stalemate of recent months has revealed fundamental differences. North Korea says it will never unilaterally surrender its nuclear weapons and missiles and insists that U.S.-led sanctions against it should be lifted first before any progress in negotiations. The Trump administration has vowed to maintain robust economic pressure until North Korea takes real steps toward full, verifiable denuclearization.

Leif-Eric Easley, a professor at Ewha University in Seoul, said progress in working-level negotiations would depend on several factors, including whether Kim empowers his officials to negotiate concrete steps and whether the Trump administration embraces "a phased approach where summits and sanctions relief must be earned, but denuclearization is not decided all at once."

But there are doubts about whether Kim would ever voluntarily deal away an arsenal that he may see as his strongest guarantee of survival.

After their Singapore summit in June 2018, Trump and Kim issued a vague statement calling for a nuclear-free Korean Peninsula without describing how or when it would occur.