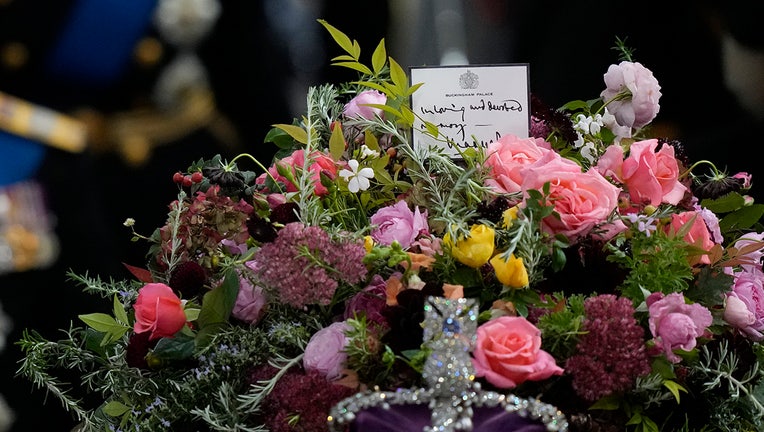 LONDON - Queen Elizabeth’s funeral was filled with symbolism and connections to the many moments and places she touched during her 70-year reign.

Monday, hundreds of thousands of people lined the route from Westminster to Windsor Castle, getting a momentary glimpse of the funeral procession. The large glass windows of the hearse offered a clear view of her coffin, which featured several notable decorations.

The coffin was draped with the royal standard, a flag that is typically flown when the queen is in residence at one of the palaces, or on a vehicle when she is aboard. It was topped with wreath of flowers including blooms and foliage cut from the gardens of Buckingham Palace and Clarence House at Charles’s request.

They include rosemary for remembrance, and myrtle cut from a plant that was grown from a sprig of myrtle in the queen’s wedding bouquet in 1947.

On a wreath atop the coffin, a handwritten note read, "In loving and devoted memory," and was signed Charles R — for Rex, or king.

Also atop of the coffin was the Imperial State Crown, a 2.3-pound crown worn by the queen after her coronation in 1953. The crown is adorned with 2,901 precious stones, including the Cullinan II diamond, St Edward's Sapphire, the Stuart Sapphire, and the Black Prince's Ruby.

The Sovereign’s Sceptre and Sovereign’s Orb were the other items atop the coffin before being placed on the altar at St. George's Chapel. Both items date back to 1661; they will remain in the collection of the Crown Jewels of the United Kingdom.

RELATED: Some Indians call for return of legendary Koh-i-Noor diamond from Britain

Monday was declared a public holiday in honor of Elizabeth, who died Sept. 8 — and hundreds of thousands of people descended on central London to partake in the historic moment. They jammed the sidewalks to watch the coffin wend its way through the streets of the capital after the service. As the procession passed Buckingham Palace, the queen's official residence in the city, staff stood outside, some bowing and curtseying. 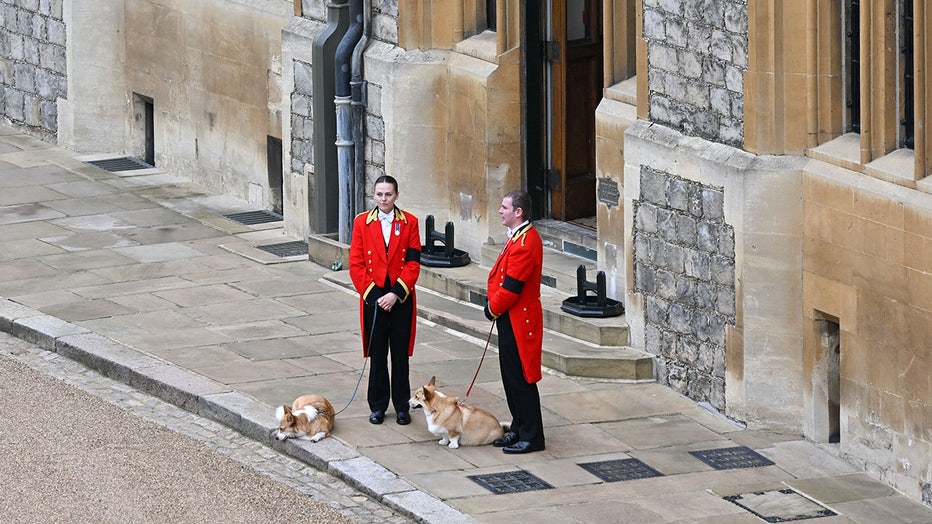 The queen's corgis, Muick and Sandy are walked inside Windsor Castle on September 19, 2022, ahead of the Committal Service for Britain's Queen Elizabeth II. (Photo by GLYN KIRK/POOL/AFP via Getty Images)

As the queen’s coffin arrived at the castle, there were poignant reminders of her love of animals: A groom stood at the roadside with one of her ponies, Emma, and another member of staff held the leashed of two of her beloved corgis, Sandy and Muick.

Information from the Associated Press was used in this report. This story was reported from Tampa, Fla.