Universal Time (UTC). The Moon moves right to left, passing through the penumbra and umbra, leaving in its wake an eclipse diagram with the times at various stages of the eclipse. (Credit: NASA Goddard Space Flight Center/Scientific Visualization Studio)

Fall is the perfect season for skygazing almost anywhere in the U.S., with cooler temperatures and clear skies to find your favorite constellations. In November, U.S. sky gazers will enjoy a lunar eclipse and a planet parade with a few ongoing meteor showers as highlights.

On Nov. 8, the Sun, Earth and moon will align so that the Earth’s shadow eclipses the moon. It will be the last total lunar eclipse until March 2025. However, according to NASA, there will be some partial and penumbral eclipses in the meantime.

Lunar eclipse totality will be visible to North and Central America, Asia, Australia and New Zealand. 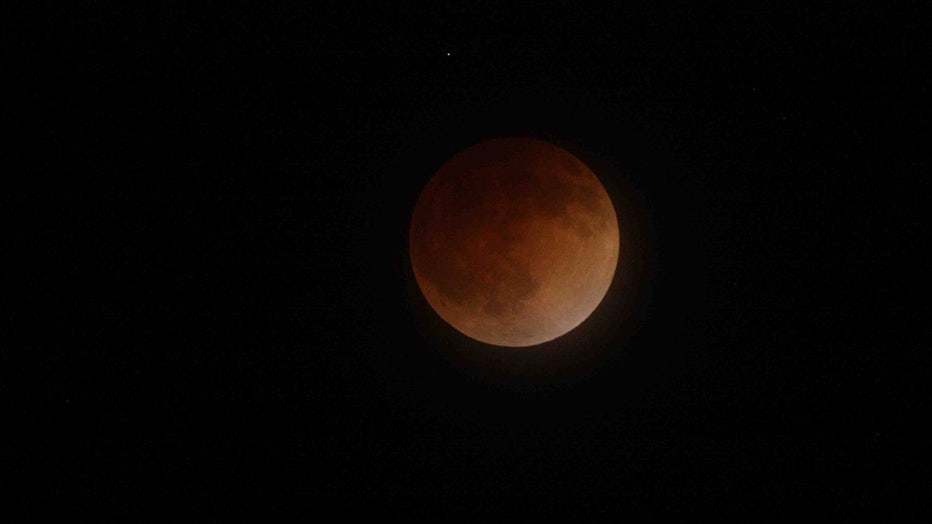 FILE - The United States was in a prime orbital position and time of day to view the eclipse on April 15, 2014.

TIPS ON HOW TO PHOTOGRAPH THE MOON

In the U.S., those in the West will have the best opportunity to view the eclipse because totality begins at 5:17 a.m. ET or 2:17 a.m. PT. This means that by 6:42 a.m., the sun will be up when totality ends on the East Coast, while the West Coast won’t compete with sunlight just yet.

A lunar eclipse is often called a blood moon because, during an eclipse, the only sunlight reaching the moon passes through Earth’s atmosphere, causing red light -- which has a longer wavelength than blue light -- to cast a reddish glow on the lunar surface.

WHY DOES THE MOON TURN RED DURING A LUNAR ECLIPSE?

According to NASA, weather can impact how red the moon will look. The more dust and clouds in Earth’s atmosphere, the redder the moon will appear. 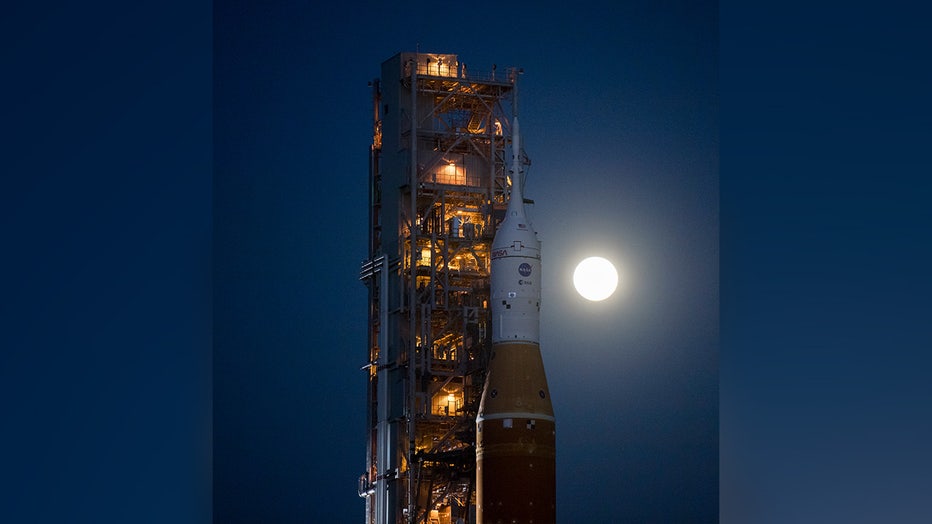 FILE - The moon is seen rising behind NASA’s Space Launch System (SLS) rocket with the Orion spacecraft aboard atop a mobile launcher as it rolls out to Launch Complex 39B for the first time, Thursday, March 17, 2022, at NASA’s Kennedy Space Center i (NASA/Aubrey Gemignani)

If NASA’s current timeline sticks, the space agency’s mega moon rocket, the Space Launch System, should be at the Kennedy Space Center launchpad, where it will blast off later this month in time for the eclipse. The full moon and lunar eclipse will provide a beautiful backdrop to the 322-foot-tall Artemis 1 rocket.

To find out how clear the sky will be on Nov. 8, download the FOX Weather app and use the plan tab to add the total lunar eclipse for your location. 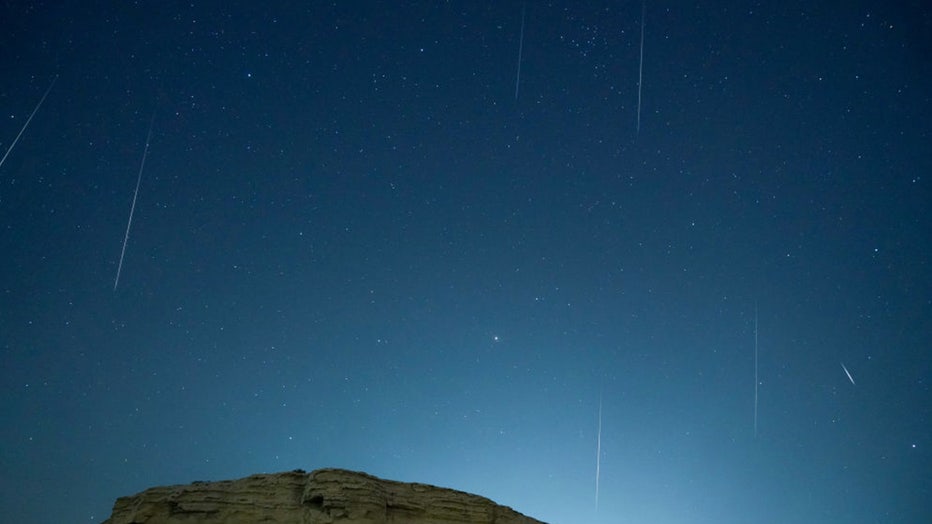 FILE - A meteor streaks across the night sky in Bazhou, Xinjiang Province, China, in the early morning of Dec. 14, 2021. (Xue Bing / Costfoto/Future Publishing via Getty Images)

While enjoying the fall sky-gazing weather, look out for meteors this month.

There will be several ongoing meteor showers throughout November. All meteor spotting is best accomplished by finding a dark spot outside, away from city lights or other light pollution.

According to the American Meteor Society, the Orionids reached peak meteor shower activity in late October but continue until Nov. 22.

Next up, the Leonids will be active from early November until Dec. 2, according to the AMS. These meteors come from the comet 55p/Tempel-Tuttle, which orbits the sun every 33 years. Look to the constellation Leo to view the Leonids.

According to NASA, the Leonids are a major meteor shower with about 15 meteors per hour during peak activity. The peak shower activity happens between Nov. 17 and 18, when the moon will only be about 40% full.

The Geminid Meteor Shower starts after mid-November and is one of the "best and most reliable annual meteor showers," according to NASA.

Look to the Gemini constellation from Nov. 19 until Christmas Eve to try and spot the Geminids.

The Geminids will peak in mid-December when sitting outside to enjoy astronomical views will require bundling up and a warm drink. 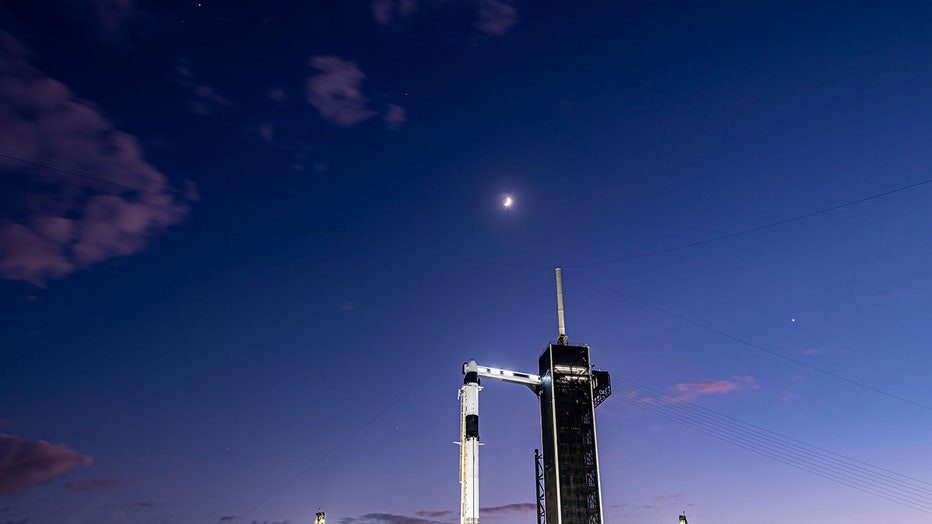 FILE - A SpaceX Falcon 9 rocket on Kennedy Space Center launchpad 39A with Jupiter, Saturn, the Moon, above the rocket and Dragon. (SpaceX)

Throughout November, Jupiter will be bright in the sky to the south. The gas giant is easy to spot because it will be the brightest object in the sky after sunset.

According to Earthsky.org, Saturn will shine brightly after the golden hour of sunset early in the evening. Toward the end of the month, the ringed planet will be closer to the moon and easy to spot.

In the early evening, Mars will trail the moon to the southwest as it begins moving toward opposition when the Earth passes between Mars and the sun bringing the two planets closer together.