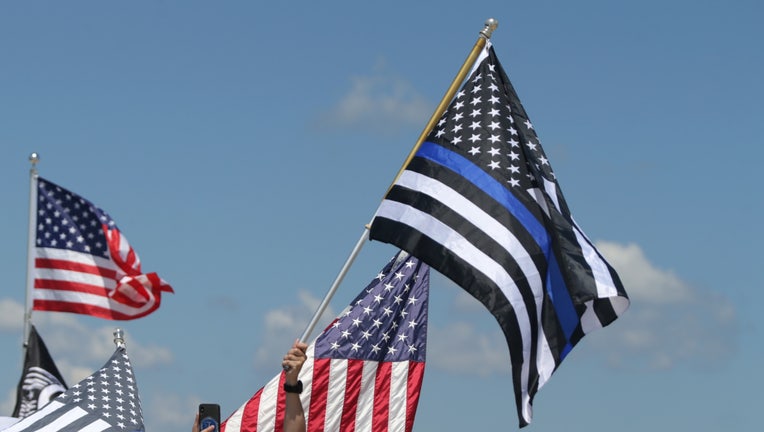 FILE: People wave thin blue line flags while they attend a Back the Blue rally in support of police departments in Quincy, MA. (Photo by Jonathan Wiggs/The Boston Globe via Getty Images)

Players Brady Williams and Jared Bentley asked permission to carry the flags, which are meant to express support for law enforcement and firefighters, at the start of their game last Friday on "Patriot Night" but were told no, according to Local 12 WKRC-TV.

"Little Miami Local Schools is saddened to see this story take such a negative turn. While we understand these students' desire show their support of our first responders, they did not obtain permission from district officials," Little Miami High School said in a statement, according to Fox 19. "Administrators must act when students break the rules."

The school added that it organized its Patriot Night program "to memorialize the victims of 9/11." The program "was already part of our pre-game ceremonies on Friday, and the American flag is the first thing through the tunnel every Friday night."

"Little Miami always has – and always will – support our first responders, our veterans, and all who sacrifice to maintain our freedoms," the statement said.

Community members are planning to rally around the two students at their next home game to show support for their actions, according to the outlet.