Starting Friday, May 8th until the two-year anniversary on May 18th, each of the fallen 10 will be honored by a special activity, dedicated to remembering what each of them loved to do best. The goal is to embrace life while remembering all 10 souls.

Starting Friday, each one of the 10 people killed will have a day dedicated to honoring them.

Starting Friday, May 8th until the two-year anniversary on May 18th, each of the fallen 10 will be honored by a special activity, dedicated to remembering what each of them loved to do best.
The goal is to “embrace life while remembering all 10 souls.”

Her husband of more than 30 years, Steve Perkins, said his wife, much like her Galveston roots, loved spending time at the beach.

To honor her memory, folks will be asked to spend time enjoying the outdoors.

"She liked the fresh air and the outdoors. That would be perfect for her. That was her style. I remember one of the few times it snowed in Houston, she came home and was all excited because instead of keeping her students in class, she took them outside to play in the snow," Perkins said.

Over the course of the last two years since the deadly shooting, Perkins said he’s been focused on keeping Ann’s memory alive and pushing for legislative change.

"The days are the same for me. There’s no closure currently. I still don’t know if she suffered or how many times she was shot. I don’t know why this tragedy had to occur, especially to my wife. It seems like the victims don’t have any rights at all. You can't get any information, you can hardly get anything. But yet, the perpetrator can get whatever they want. To me, the laws need to be changed," Perkins said.

Much like other Santa Fe families, Perkins has been waiting for the trial of the admitted gunman to begin so he can receive some semblance of closure. He’s been working with victim’s rights attorneys to change what information can be disclosed to families after a tragedy.

"There is no reason for this. Car accidents happen, it’s an accident. Cancers happen, it’s a disease. These are things that are out of your control. What happened on May 18th was controllable," Perkins said.

Similarly, Rosie Stone is aching to find out what exactly happened to her son, Chris Stone.

She’s channeled most of her grief and energy into developing an organization called C-C-C: Chris Courage Change.

Soon, CCC be awarding its first batch of the 'Chris Stone Legacy Scholarships' in honor of her son.
"We did raise $8,000 in memory of Chris for his scholarship at a cook-off event. We’re going to have eight scholarships to hand out $1000 each," Stone said.

Chris Stone will be remembered on May 13th. Those who wish to participate in honor Chris can do so by watching football. Stone said Chris was a huge football fan and especially loved the Dallas Cowboys.

She said she'll always be grateful for the students and community members who never give up on finding ways to honor her son.

"The more we talk about Chris, the more we’ll never forget about him. As a parent, that’s your biggest fear is that after the shooting happens, people will move on and they’ll forget – but these kids have been great," Stone said.

Stone said she's also been working on developing Stone Law to bring forth to lawmakers next legislative session. The bill would require more immediate accountability after a mass shooting.

"Stone Law is going to start holding people accountable. For example, if a shooting were to happen today, starting today people need to be held accountable. And that’s the only way family’s hearts can start mending," Stone said.

Other days of remembrance: 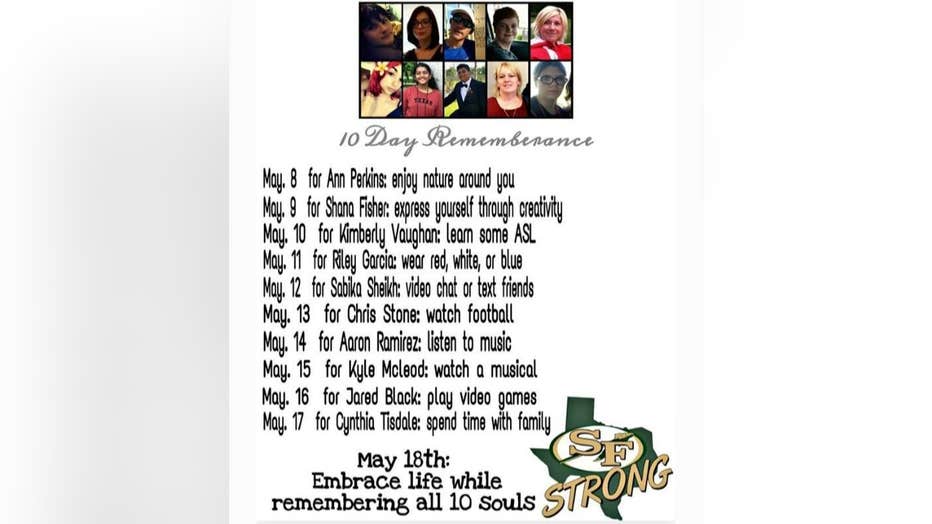