A scuba diver who lost consciousness was rescued by a group of women in mermaid costumes off Catalina Island.

LOS ANGELES COUNTY, Calif. - "It was something out of a fairy tale, being saved by a mermaid," said scuba diver Javier Claramunt.

He was diving off Catalina Island with his father and friend Pablo Avila last weekend, when Pablo lost consciousness near the end of the dive.

Keep in mind that these are extremely well-trained and experienced divers, so both Javier’s training kicked in, and began the process of rescuing their buddy. No sooner had they started, that a bunch of mermaids showed up around them.

You can see the images in our piece. Turns out that a group of women training for the advanced PADI mermaid rescue course nearby realized the diver was in trouble.

Elaina Marie Garcia, who is also a highly experienced scuba diver and instructor, explains that the sport has become so popular – swimming with a mermaid tail – that large groups have formed. But this is about much more than wearing sea shell bras and holding your breath.

Elaina runs the group out of Catalina and the group just happened to be the one who noticed Pablo in distress as they were practicing rescue scenarios.

The group swam to the divers, got Pablo’s gear off, while giving him mouth to mouth, and towed him back to the stair entry at Casino Point where paramedics were waiting.

Pablo was taken to the island’s decompression chamber, where he regained consciousness after several hours of decompression.

"We had seen the mermaids before starting our dive," Javier said. "And were thinking how cute they were. Little did we know how well-trained they really are."

Again, both Javier and Pablo have been diving since the 1970s and are highly trained themselves, so they know a thing or two about rescues.

If you want to find out more about mermaid training and what they do, click here.

As for Pablo, he is recuperating well. He knows his buddies would have probably gotten him to shore just fine, but hey, he can now brag about being saved by mermaids – with images to prove it! 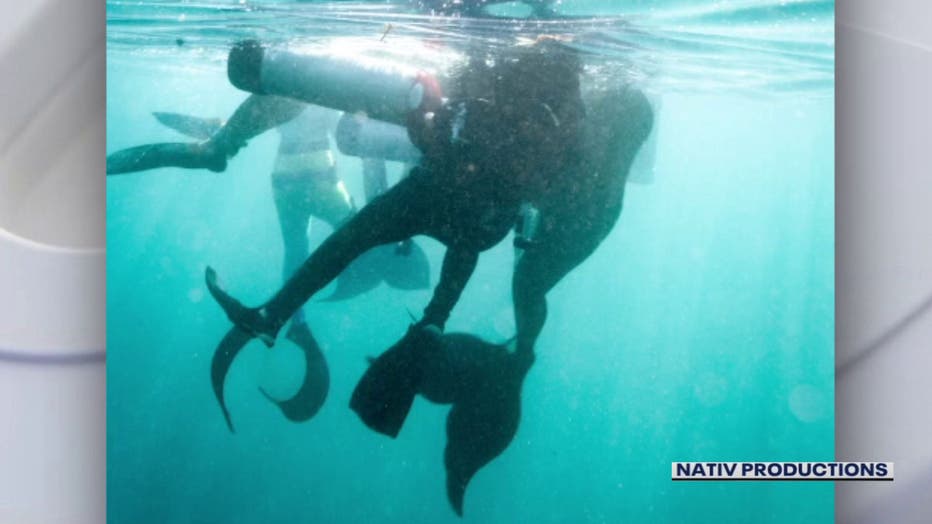 A scuba diver was rescued by a group of women in mermaid costumes off Catalina Island.