Amazingly, the standout athlete is expected to recover despite where the bullet hit and lodged in his head. But his family is angry.

FORT WORTH, Texas - A college football player home in North Texas on a break was an innocent bystander when he was shot.

Amazingly, the standout athlete is expected to recover despite where the bullet hit and lodged in his head. But his family is angry.

Police say LaCoryien was an innocent bystander when someone opened fire at a house party last weekend in Fort Worth.

LaCoryien’s coach said in a press conference this week that as many as 100 people have visited him in the hospital. He seems to be making a full recovery after being shot squarely in the forehead. His family says it's by the grace of God that he is alive. 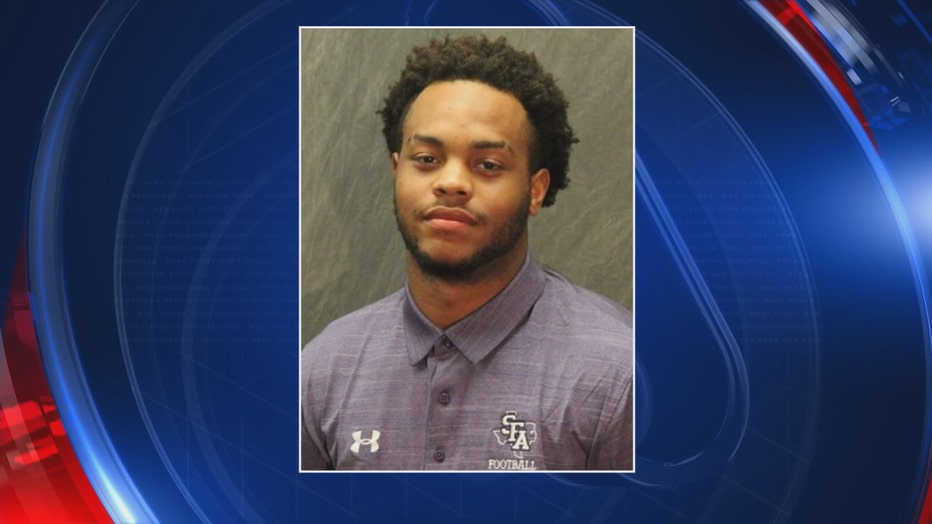 Kamren Washington watched his older brother get shot as they left a Halloween party in Fort Worth just before 1 a.m. Sunday.

“We were walking to the car. They shot, and then I thought he was just ducking,” Kamren recalled. “Then I looked, and he was shot.”

LaCoryien was shot right between the eyes. Kamren called 911 and then called their mother.

LaCoryien was rushed from the 4900 block of Mansfield Highway to JPS Hospital, where doctors learned the bullet had traveled to the right side of his skull. Word traveled fast to his coaches and teammates — both at SFA and back home where he recently graduated from Mansfield Summit High School.

“Somebody drove by and shot up the place, and he took one right square in the forehead,” said SFA Coach Colby Carthel. “So it was not a fatal injury. It’s a miracle. The doctors and nurses said he still had function of all four of his limbs and all of his senses.”

Fort Worth police are not calling the shooting a drive-by, but the say they don't yet know the motive or have any good leads. Police add there was nothing bad happening at the party. No one was mad or fighting. There was no reason for any of the high school or college students there to have been targeted.

“It’s scary,” said LaCoryien’s mother, Kimberly Crawford. “Just want them to be off the streets because I don’t want anyone else to get hurt.”

LaCoryien’s family says he is making them laugh, as usual, after having surgery Tuesday to remove the bullet.

“It’s a lot better situation than I thought I was going to walk into when you hear one of your players has been shot in the forehead,” Coach Carthel said.

Police say there is a car that sat in a nearby parking lot with its lights on from 10:30 p.m. until right after shots were fired. However, police are not going so far as to say that that is a suspect vehicle.