Darcy Krueger, wearing the same black jumpsuit banned from homecoming, later posed in a photoshoot by a photographer who reached out after reading about the incident.

TAMPA, Fla. - A Florida teenager was denied entry to her senior year homecoming dance due to her outfit — a jumpsuit.

Darcy Krueger, 17, said when she arrived to the Tampa Bay Homeschool homecoming dance on Sept. 27, she was immediately told by the event planner that she couldn’t enter because she wasn’t wearing a dress, according to Today.

"I was very surprised and confused," Krueger told the website. "I had been standing in line in front of (the event planner), but the moment she saw my legs move she immediately denied me entrance. It felt very dismissive and inconsiderate."

The homecoming dance, which was not associated with any school, was held for homeschool students in the Tampa Bay area and the tickets cost $50, according to Today. 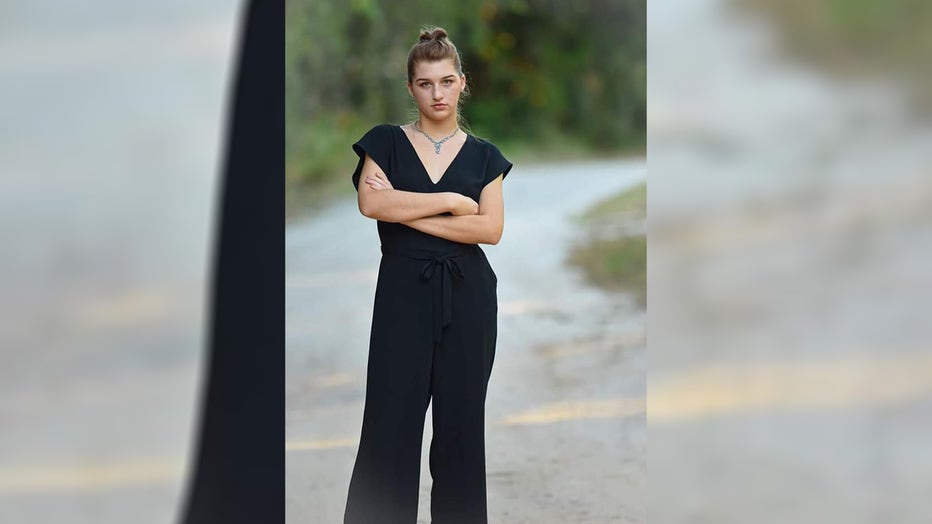 Darcy Krueger, 17, is pictured in a photo after being denied entry to a homecoming dance for homeschool students in Tampa, Florida. (Photo credit: Jennie Ellis Photography)

The event planner, Stephanie Voth, told the website in an emailed statement that the dress code was “submitted and approved by the parents of our community group.”

The dress code for the event stated "semi-formal dresses for young ladies" and dress pants, button-down shirts and ties for boys, according to Today. It also reportedly allowed strapless, knee-length and two-piece dresses with less than a two-inch gap at the midsection.

"We highly discourage dresses that are too revealing and that are simply too short," the code stated, according to Today. "Dresses that expose a plunging neckline or backlines are NOT appropriate. You will not be allowed in if your dress is questionable."

"My role is to decorate, enforce and execute the event," Voth said in the emailed statement to Today. "The dress code issue was a pantsuit does not qualify as a dress."

Krueger said she got the impression that the event planner who turned her away was “not open to having a discussion about it.”

“Even though she said I looked great, the only solution offered to me was to put a dress on and come back," Krueger told Today. "That was not an option for me once I realized the only reason I couldn't go in was because I wasn't wearing an actual dress. I just couldn't support that idea."

The 17-year-old said her initial reaction was to call her mother to come pick her up since she didn’t want to be there anymore. Her mother, Melissa Krueger, later posted her disappointment about the incident on Facebook.

“My daughter was just denied entrance because her dress attire has a crotch in it,” Melissa Krueger said in the Facebook post. “Tell me this isn’t formal attire. The lady who wouldn’t let her in had pants on and refused to look at my screenshot of the dress code.”

Krueger wrote that both she and her teenage daughter were “upset” about how things transpired, adding that jumpsuits were not listed in violation of the dress code.

Photographer Jennie Ellis saw the Florida mother’s post on Facebook and offered to do a photoshoot with Darcy for free, Today reported. Darcy, wearing the same black jumpsuit, posed in some of the photos with a trunk — which Ellis said symbolized any baggage the teen had been carrying.

"She was exuding strength and confidence. I didn’t give her any poses, she did that on her own," Ellis told Today. "By the end she was so electrified."

In a blog post, Ellis shared a photo of the teen, alongside other women she has photographed, stating that she believes in “the power of photography to show a girl her inner strength and beauty.”

Ellis told the website she admired that Darcy did not go home to change out of her jumpsuit.

"What I hope for her is that she knows she has a voice," Ellis told the website. "I want Darcy to feel like Darcy can speak up for what is right. Maybe some other girls wouldn’t have the nerve to stand up for this.“

Darcy told Today that the photos remind her that “you can rise above disappointing circumstances and own them, instead of them owning you.”