The Dallas salon owner who was jailed after she refused to apologize for opening her business in defiance of countywide COVID-19 restrictions has been released under an order from the Texas Supreme Court.

DALLAS - The Dallas salon owner who was jailed after she refused to apologize for opening her business in defiance of countywide COVID-19 restrictions has been released under an order from the Texas Supreme Court.

The order came moments after Texas Gov. Greg Abbott issued a change to his executive orders related to COVID-19, eliminating confinement as a punishment for violating the orders.

The governor mentioned Dallas salon owner Shelley Luther by name when issuing the change. He said it supersedes local orders and should be applied retroactively to April 2.

“Throwing Texans in jail who have had their businesses shut down through no fault of their own is nonsensical, and I will not allow it to happen,” Abbott said. “That is why I am modifying my executive orders to ensure confinement is not a punishment for violating an order."

Luther was released on a personal bond after serving two days of a weeklong sentence. She was emotional when she walked out of the Dallas County Jail.

She said she was doing okay, and made very brief comments before being ushered away by her attorney and family. Her supporters cheered her release.

“Thank you so, so much. I'll have much more to say when I can gather myself, but I'm a little overwhelmed,” Luther said. 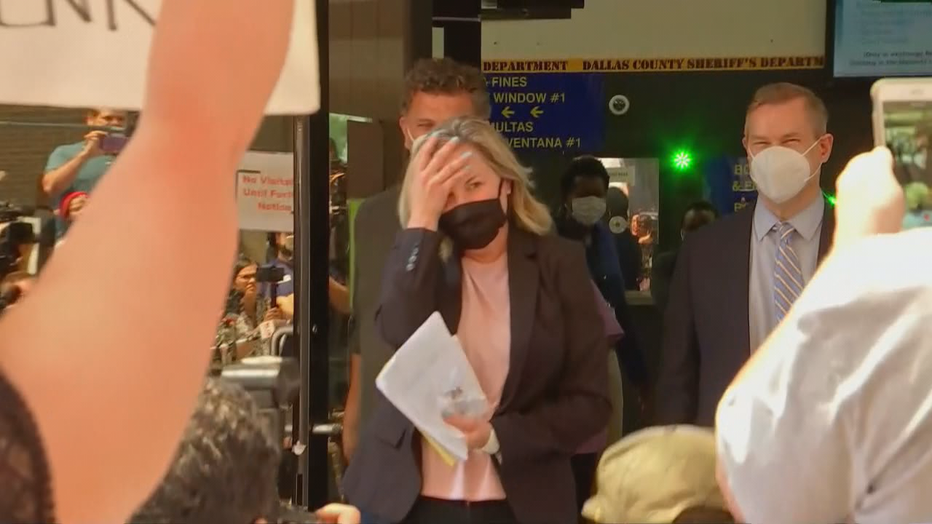 Luther was jailed after she refused to apologize for opening her business in defiance of state and countywide COVID-19 restrictions.

District Judge Eric Moye gave her an opportunity to apologize, declare herself “selfish,” and promise not to reopen Salon a la Mode until she was allowed to do so. Luther defiantly declined.

On Wednesday, Texas Attorney General Ken Paxton called for Luther’s immediate release. Paxton said the judge “abused his authority” by jailing Luther for opening her salon “to feed her family.”

Abbott said if applied correctly, his amendment would free Luther and other business owners who have been jailed for similar violations. In April, two women in Laredo were arrested for offering nail and eyelash services out of their homes.

“It may also ensure that other Texans like Ana Isabel Castro-Garcia and Brenda Stephanie Mata who were arrested in Laredo, should not be subject to confinement," he said. "As some county judges advocate for releasing hardened criminals from jail to prevent the spread of COVID-19, it is absurd to have these business owners take their place.”

Luther's attorney filed an appeal after a Dallas district court judge issued a temporary restraining order, calling for Luther to shut down Salon A La Mode, which was operating in violation of Gov. Abbott's COVID-19 executive order.

But the governor himself has emerged as one of Luther’s strident supporters. He spoke about his decision to change his executive orders during a White House meeting with President Donald Trump on his Texas reopening plan.

“As we are asking the people in our state to comply with these orders, we should not be taking these people and put them behind bars,” the governor said. “These people who have spent their lives building up a business.”

“We still have a case. The city of Dallas had filed suit because of the illegal operation. We still have to deal with that,” he said.

Judge Moye told FOX 4 on he cannot talk about the case, as per the judicial canon, and said the city attorney needs to comment. The city attorney was not available to take questions on Thursday.

FOX 4 reached out to City Councilman Lee Kleinman. Luther’s salon is in his district.

“She deserved to go to jail for that,” he said.

Kleinman agrees with the judge’s sentence for violating the restraining order. He also calls the timing of the governor’s amended order, followed by the state supreme court’s decision, “unfortunate.”

“But that is what the court system is for,” he said.

[REPORTER: “Is it unusual to see the Texas Supreme Court come up with a decision this fast?”] “Very unusual. The court usually relies on multiple layers of appeal,” Dale Carpenter said.

Carpenter is an SMU constitutional law professor. He pointed out that Gov. Abbott's modified executive order, even though retroactive, did not trigger Luther's release. She was jailed for contempt of court for not following Judge Moye's order.

Judge Moye, a self-proclaimed lifelong Democrat, now finds himself at odds with a Republican governor and majority-Republican Supreme Court.

“It starts to look political at this point, and the danger with that is that you don’t want to have public health orders enforced on a political basis. You want science to guide that kind of decision making,” Carpenter added.

Carpenter said Thursday's ruling also could send the wrong message to other business owners itching to reopen too soon.

“The court has to be able to enforce its own orders so that we can have the proper administration of justice so that businesses aren’t free to just open in defiance of any public health orders,”

A stylist at Salon A La Mode said they will continue doing business for the rest of the day.

The ordeal has turned into a political cause for some in power. It has energized people on all parts of the political spectrum.

The ordeal has turned into a political cause for some in power. It has energized people on all parts of the political spectrum.

Conservatives have rallied in Luther’s defense and even more so in the wake of her jail sentence.

Gov. Abbott is among those now in a position of defending a woman who violated his order, saying the judge picked the wrong punishment.

Since the pandemic's beginning, those in a position of power have issued restrictive measures. Some have been at the expense of personal liberties and the economy. Those are two issues cherished by conservative voters.

George Seay is a Dallas-based businessman and Republican strategist.

“I think it's a terrible situation to be honest. Because, you're right. Republicans are the party of the business,” Seay said. “But at the same point, one of the duties of public service is public safety, health and welfare.”

Governor Greg Abbott has faced criticism from his left and right. The Texas Democratic party has accused the governor of valuing the economy over people's lives.

Michael Quinn Sullivan, the influential far-right activist, wrote of the governor's involvement in Luther's case: “Greg Abbott and his cronies are trying to take credit, but his action came too late is nothing more than acknowledgment her time in jail was his fault to begin with.”

Seay agrees with Abbott that jail time was harsh and says the governor's political base is likely in the same boat.

“I think that the governor's base has probably 10 to 1 come on super strong with disdain, contempt and vitriol about the judge's decision,” Seay said. “While I understand the depth of emotion, and I do think the judge got it completely wrong and took a moral stand that wasn't very moral at all in the end.”

An example of the politicizing of the case was when Lt. Governor Dan Patrick spoke on the Fox News Channel Thursday night.

“It’s the difference between Republicans and Democrats in this country,” Patrick said. “The Democrats seem to enjoy being tyrants at this time.”

SMU Political Science Professor Matthew Wilson says involving himself in Luther's case allows the governor to try to have his cake and eat it too.

But understanding how people respond to policy decisions and actions during this pandemic is something that won't be fully understood right away.

Seay said he does believe Abbott has struck a good balance in his governing through this. But as Wilson notes, one thing to closely watch going forward is how much voters assign blame to those in positions of powers.