The remnants of Tropical Storm Kay are headed to SoCal.

It's been 83 years since a tropical cyclone last made an official landfall in California, and Tropical Storm Kay will not end that streak because it won't actually move onshore in the Golden State. However, that doesn't mean cities such as Los Angeles and San Diego will be spared the hurricane's rain and wind impacts.

According to the FOX Forecast Center, Hurricane Kay is forecast to produce heavy rain and high winds across Southern California on Friday and Saturday as the center of the storm moves away from Mexico's Baja California and tropical moisture surges northward into the southwestern U.S.

Click here for Tropical Storm Kay's predicted impacts on the Baja Peninsula, where bands of heavy rain and gusty winds will persist at times on Friday. 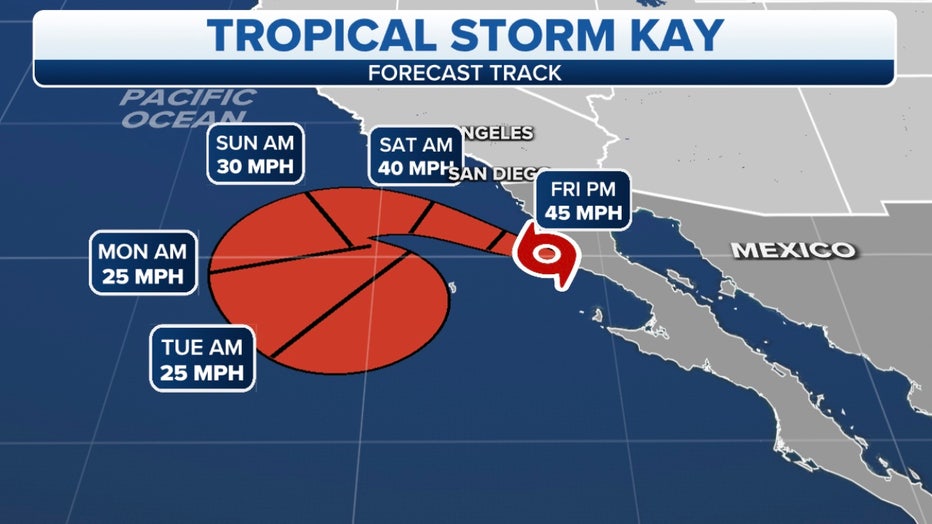 How much rain will Tropical Storm Kay dump on Southern California?

Rainfall amounts between 2 and 4 inches, with isolated totals up to 6 inches, are possible through Saturday in parts of Southern California.

This amount of rain is likely to produce flash flooding and small-stream flooding in some areas, especially near recent burn scars and along the eastern slopes of the Southern California mountains. 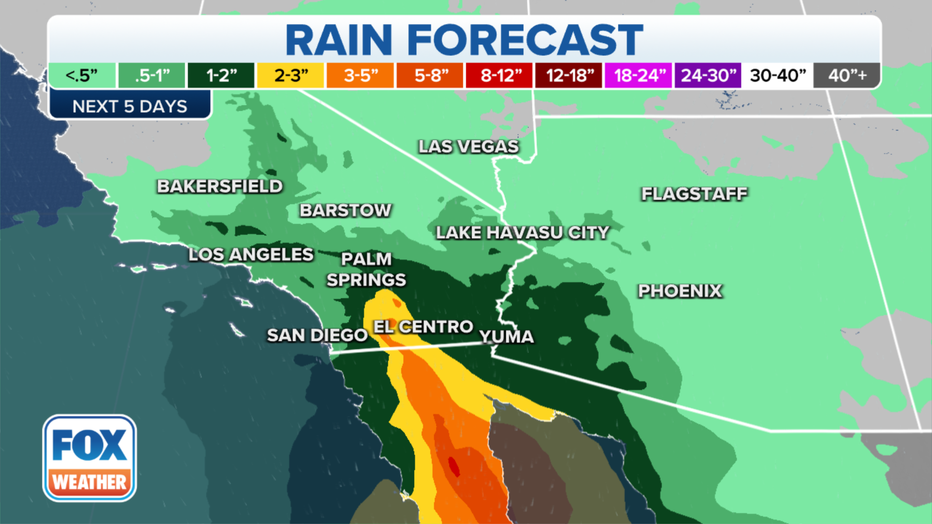 "The brunt of this rain is going to be in the ranges and in the mountains of Southern California," FOX Weather meteorologist Jane Minar said. "San Diego, El Centro, Palm Springs and the Sonoran Desert – this is where we are expecting the greatest amount of rain potential over the next 48 to 72 hours."

The cities of Los Angeles and San Diego are currently predicted to receive between a half-inch and an inch of rain, but higher amounts are likely to the east and southeast of those metro areas. 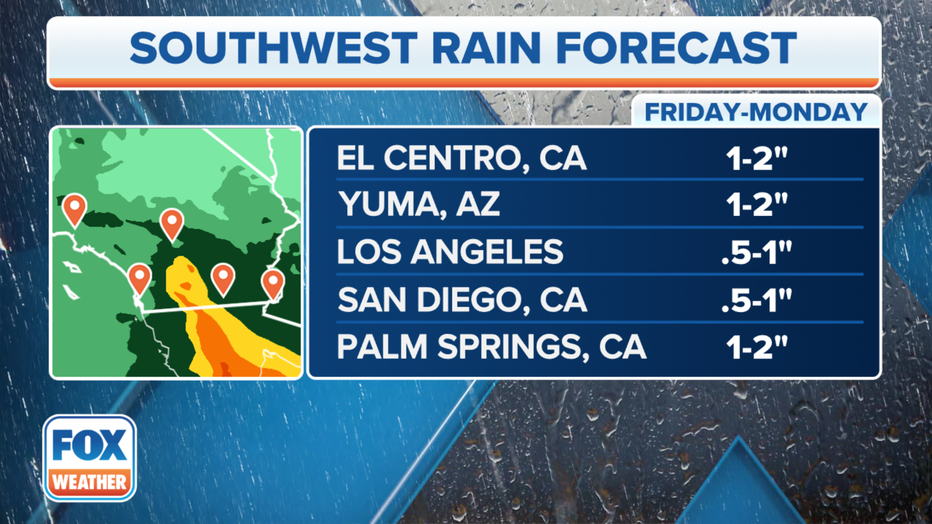 Due to the threat of flooding rainfall, Flood Watches have been issued for portions of inland Southern California from Friday morning through Saturday evening.

"This could be a significant impact," Minar said. "Any moisture is impressive with a tropical cyclone, but when that tropical cyclone moves into a region that's not normally used to seeing moisture on this level, rain is beyond impressive, and so we really need to pay attention to this forecast closely." 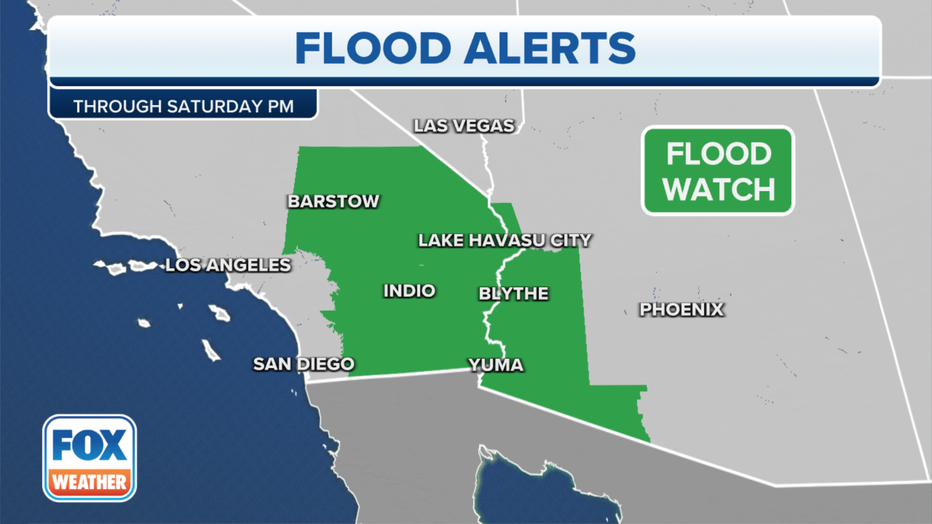 Flood Watches are in effect for parts of Southern California. (FOX Weather)

How high will the winds be from Hurricane Kay in Southern California?

High winds are expected in Southern California, particularly on Friday.

Unfortunately, the strong winds will likely arrive before the heavy rain, and that could increase the fire danger in California which already has nearly a dozen wildfires burning across the state.

According to the FOX Forecast Center, wind gusts could reach as high as 75 to 80 mph in the mountains, with gusts between 55 and 60 mph expected in the valleys. These high winds will have the potential to knock down trees and power lines, with the possibility of widespread power outages. 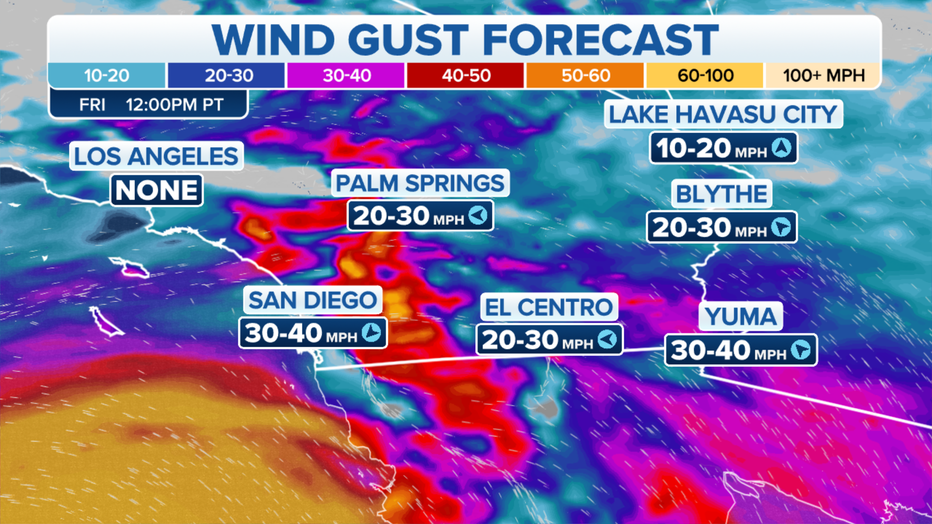 Tropical Storm Kay is also expected to churn up the surf along the beaches of Southern California by Friday, leading to the development of life-threatening rip currents.

"Southeast swell from Kay is expected to bring surf of 4 to 6 feet, strong rip currents, and strong longshore currents to Southern California beaches Friday through Sunday," the National Weather Service in San Diego noted in a forecast discussion. "South-facing beaches are expected to be the most impacted."

Get the latest updates on this story on FOXWeather.com.