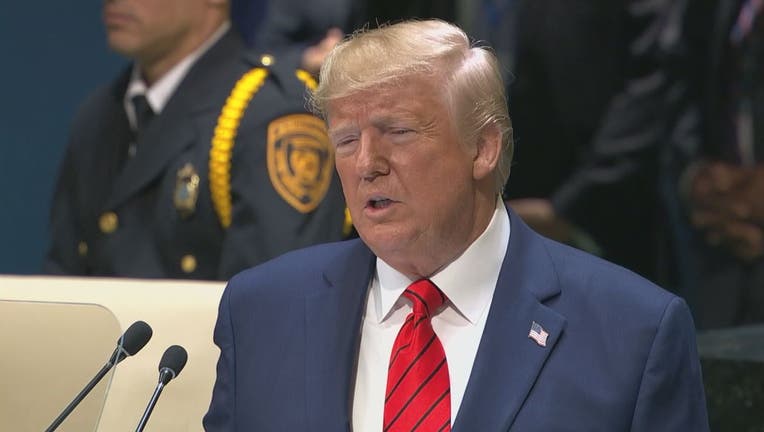 NEW YORK - (AP) -- Facing growing calls for his impeachment, President Donald Trump addressed the U.N. General Assembly on Tuesday and delivered a roaring defense of nationalism and American sovereignty even as he tried to rally a multinational response to Iran's escalating aggression.

The president implored the world's leaders to prioritize their own nations, with strong borders and one-on-one trade deals, rejecting sweeping transnational organizations and alliances.

Focusing on the United States' self-interest, Trump said that the nation's security was jeopardized by the threat posed by Iran and warned Tehran to stop its aggression toward Washington's allies in the Middle East.

"As long as Iran's menacing behavior continues sanctions will not be lifted. They will be tightened," Trump warned. "The United States does not seek conflict with any other nation. We desire peace, cooperation, and mutual gain with all. But I will never fail to defend America's interests."

As speculation mounted that Trump could meet in New York with Iranian President Hassan Rouhani, the president raised the possibility of a diplomatic breakthrough, saying "the United States has never believed in permanent enemies. We want partners, not adversaries."

But while Trump commanded the global stage, momentum was building in Washington among Democrats to impeach the president after it was revealed that he ordered his staff to freeze nearly $400 million in aid to Ukraine a few days before a phone call in which he pressured the Eastern European nation's leader to investigate the family of political rival Joe Biden. 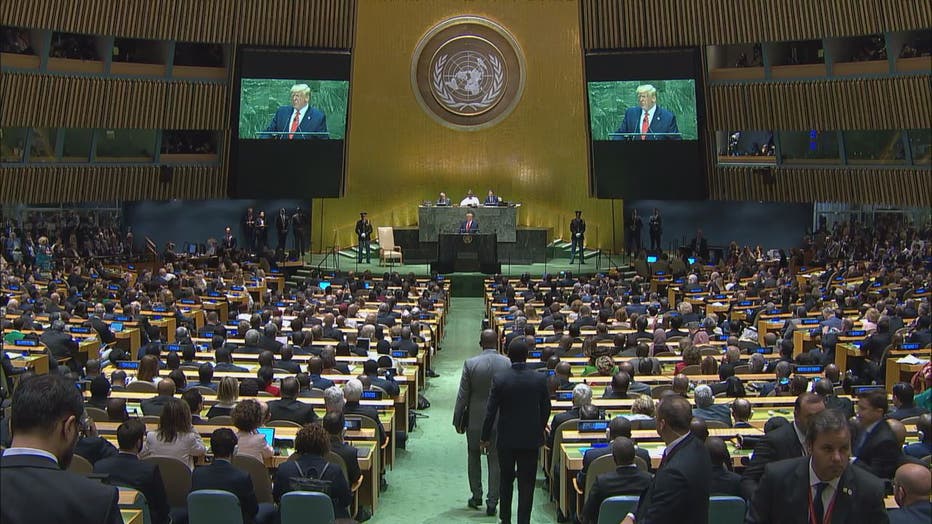 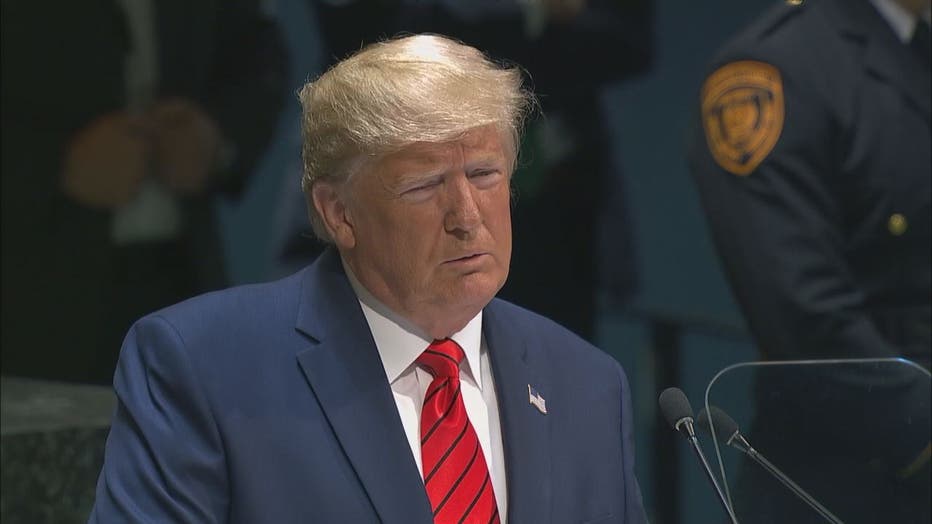 While Trump wants allies to join the U.S. in further isolating Iran, he also seems to be holding to his go-it-alone strategy of using economic sanctions to pressure Tehran to give up its nuclear program and stop attacks that are rattling the Middle East.

In the speech's first moments, Trump did not explicitly to blame Iran for recent strikes against oil facilities in Saudi Arabia. Iran has denied orchestrating the attack, which Secretary of State Mike Pompeo has deemed "an act of war."

Britain, France and Germany joined the United States on Monday in blaming Iran for the attacks. Iranian Foreign Minister Mohammad Javad Zarif, for his part, pointed to claims of responsibility by Yemeni rebels and insisted: "If Iran were behind this attack, nothing would have been left of this refinery."

Trump also addressed the ongoing standoff in Venezuela, denouncing the oppressive regime and vowing that the United States would "never be a socialist nation."

The United States and more than a dozen Latin American countries agreed Monday to investigate and arrest associates and senior officials of the Venezuelan government of Nicolas Maduro who are suspected of crimes like drug trafficking, money laundering and financing terrorism.

Trump praised his diplomatic efforts with North Korean leader Kim Jong Un, even though the autocrat continues to hold a tight grip on his nuclear weapons. Trump has met Kim for summits in Singapore and Hanoi, Vietnam, and orchestrated a surprise encounter with him in June at the Demilitarized Zone, where he became the first U.S. president to ever set foot in North Korea.

Trump said Monday that another meeting with the North Korean leader "could happen soon." He provided few details, and it wasn't clear what officials were doing behind the scenes to set up a meeting to break the diplomatic impasse over the North's development of nuclear-armed missiles targeting the U.S. mainland. 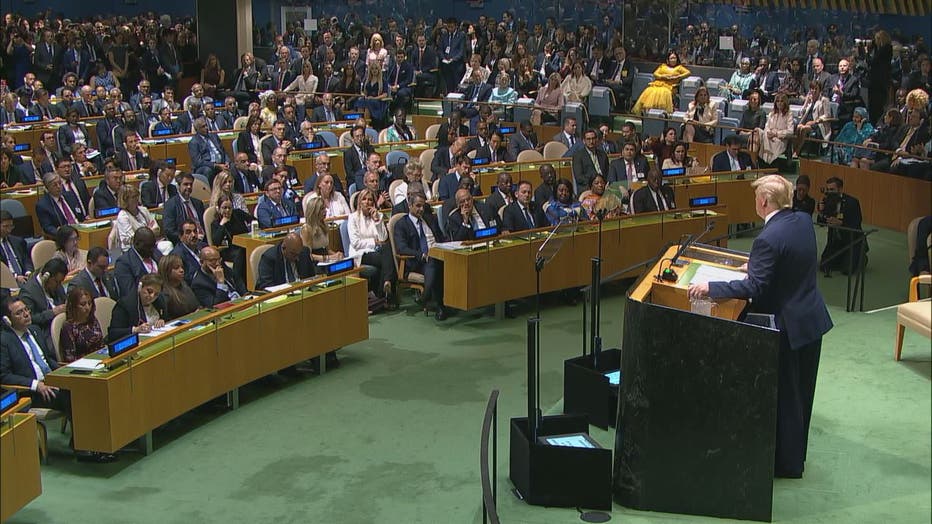 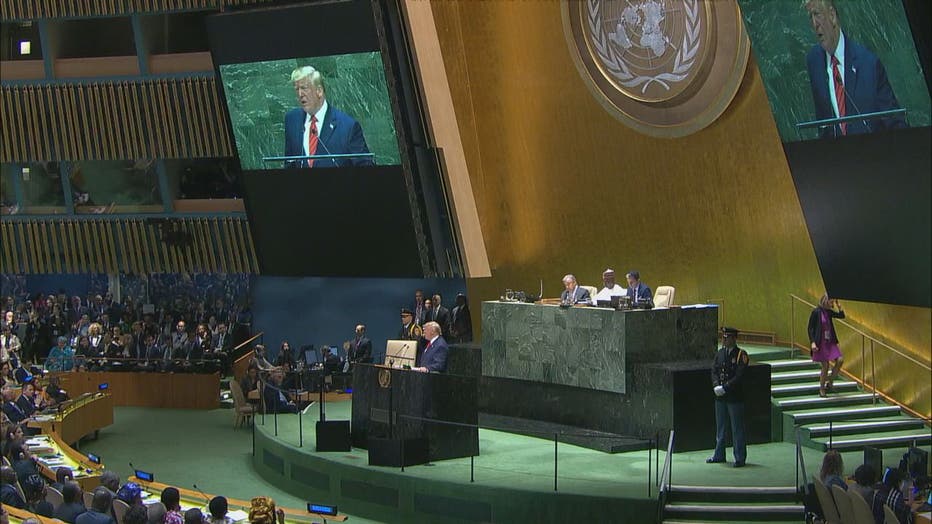 Trump's comments, even with few specifics backing them up, are tantalizing because there is extreme interest, especially in Japan and South Korea, in whether Trump and Kim can strike a deal on one of the world's most pressing standoffs.

This was Trump's third speech to the world body.

In his speech to the U.N. General Assembly last year, Trump expressed disdain for globalism and promoted his "America First" agenda. Like last year, Trump is expected to showcase strong U.S. economic numbers and talk about how he's strengthened America's military.

In his 2018 speech to the assembly, his self-adulation prompted chuckles from world leaders. That barely ruffled Trump, who shares a belief with his supporters that the United States has been asked to do too much for other countries and needs to focus on issues it faces at home.