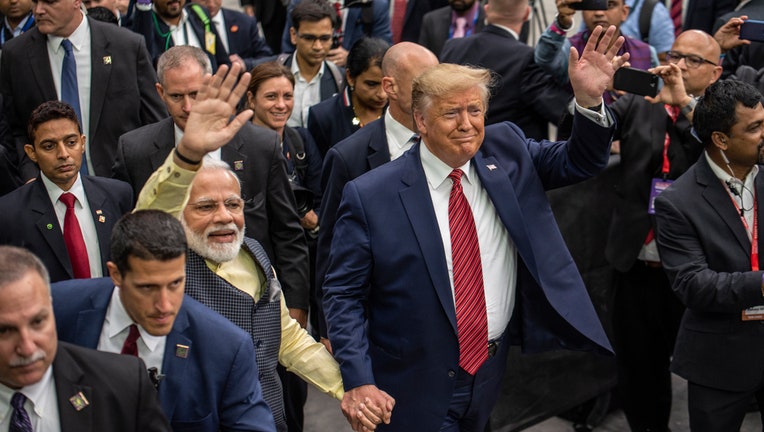 Indian Prime Minster Narendra Modi and U.S. President Donald Trump leave the stage at NRG Stadium after a rally on September 22, 2019 in Houston, Texas. The rally was expected to draw tens of thousands of Indian-Americans and comes ahead of Modi's tr (Sergio Flores / Getty Images / Getty Images)

HOUSTON - President Donald Trump's run-up to the U.N. General Assembly was a dash on Sunday through two key political states with two world leaders at events that felt like his raucous campaign rallies.

In Wapakoneta, Ohio, Trump and Australian Prime Minister Scott Morrison visited a recycled paper factory being opened by Anthony Pratt, an Australian businessman who is investing billions of dollars in the United States to create thousands of manufacturing jobs. Ohioans crowded into a hot factory chanted "U.S.A. U.S.A" when Trump talked about products emblazoned with the words "Made in America."

"This great state of Ohio is open for business," Trump told the cheering crowd at a new Pratt Industries plant still under construction.

"If it wasn't for your presidency, this mill would not be here today," Pratt said, praising the Trump administration's economic and tax policies.

Earlier, in Texas, Trump joined Indian Prime Minister Narendra Modi to highlight the growth of U.S. exports to India and billions of dollars spent by India on U.S. defense equipment. Neither mentioned trade tensions. Deafening drums marked the entrance of Trump and Modi as they clasped hands and walked across the stage in a packed Texas stadium, sending a message of unity between the world's two largest democracies.

The president also discussed border security, an important campaign issue for Texas, which shares a border with Mexico.

"We are taking unprecedented action to secure our southern border and stop illegal immigration," Trump said.

About 50,000 Indian Americans attended the "Howdy Modi!" rally in Houston, where the crowd chanted "Modi! Modi! Modi!" as he took the stage to introduce Trump as "my friend, a friend of India, a great American president."

Modi even used Trump's political slogan to say the president had a strong resolve to "make America great again."

"When I met him for the first time, he said to me 'India has a true friend in the White House,'" Modi said. "Mr. President, this morning in Houston, you can hear the heartbeat of this great partnership in this celebration of the world's two largest democracies."

The event had the feel of one of Trump's campaign rallies, complete with a packed venue and a roaring crowd, and Trump treated it that way at times.

He ticked off his accomplishments in office, highlighted a drop in the unemployment rate among Indian Americans and extolled their contributions to the U.S. as he pitched for their vote in a traditionally Republican state that Democrats have visions of pulling into their column next year.

Trump said Modi invited him to the rally — one of the largest U.S. gatherings of the Indian diaspora in history — when they met last month in France, and Trump seemed to explain his decision to attend by saying "I love India."

Earlier this year, Modi won the biggest reelection India has seen in years and his support for Trump could help the president at the polls next year. The two are to meet Tuesday on the sidelines of the annual U.N. General Assembly.

Trump is also scheduled to meet this week with Pakistani leader Imran Khan, who recently solicited the president's help mediating the Pakistan-India conflict over Kashmir. India's government has stripped the disputed Himalayan region of its semi-autonomy and launched a security crackdown last month.

Trump said U.S.-India bonds are expanding despite tensions over India's trade surplus with the U.S. In June, the U.S. canceled special trade privileges that had allowed India to export certain goods with lower tariffs. India responded by slapping tariffs on more than two dozen U.S. goods.

The U.S. and India are discussing ways to negotiate at least a partial trade deal, which would let the president score a victory as he campaigns for reelection in November 2020. A partial deal could include Washington reinstating India's special tariff status in exchange for concessions related to access to Indian markets, possibly in dairy and medical devices. Other issues are thwarting efforts to sign a larger trade deal.

In an address in Hindi to "my family," Modi briefly mentioned the trade talks and expressed hope that an announcement can be made while he and Trump participate in the U.N. gathering.

Modi said that while Trump has called himself a "tough negotiator," he has learned a few things from Trump about the art of making deals. After the speeches, Modi asked Trump to walk hand-in-hand around the perimeter of the stadium floor, looking up to the stands of cheering fans.

In Texas, Trump also was briefed on recent storm flooding in the southeastern part of the state when he stopped at a nearby U.S. Coast Guard station.

Texas Game Wardens were called to a small neighborhood in Conroe submerged underwater.

Hundreds of homes and other buildings across a region extending eastward from Houston and across the Louisiana border were damaged by Imelda, as the one-time tropical storm slowly churned across the Gulf region, dumping more than 40 inches (102 centimeters) of rain in some areas.

Authorities blame the storm for at least five deaths.

Forecasters warned that Imelda could bring up to 35 inches of rain in some areas of Texas through Friday. The storm system also brought the risk of severe weather and prompted tornado warnings Thursday morning in the areas hit hardest by flooding.

Trump will spend most of the week in New York