Though the board upheld the ruling, it scolded Facebook and said the company must decide for itself if the former president's ban will remain indefinite.

The account, @DJTdesk, included press releases and statements issued by the former president after leaving office.

The account was created more than four months after several social media companies, including Facebook and Twitter, banned Trump for his comments during the Jan. 6 insurrection at the U.S. Capitol.

"As stated in our ban evasion policy, we’ll take enforcement action on accounts whose apparent intent is to replace or promote content affiliated with a suspended account," a spokesperson for Twitter told FOX Television Stations. The spokesperson did not say who owned the account.

According to Twitter’s policy, attempts to circumvent prior enforcement, including through the creation of new accounts, are prohibited. 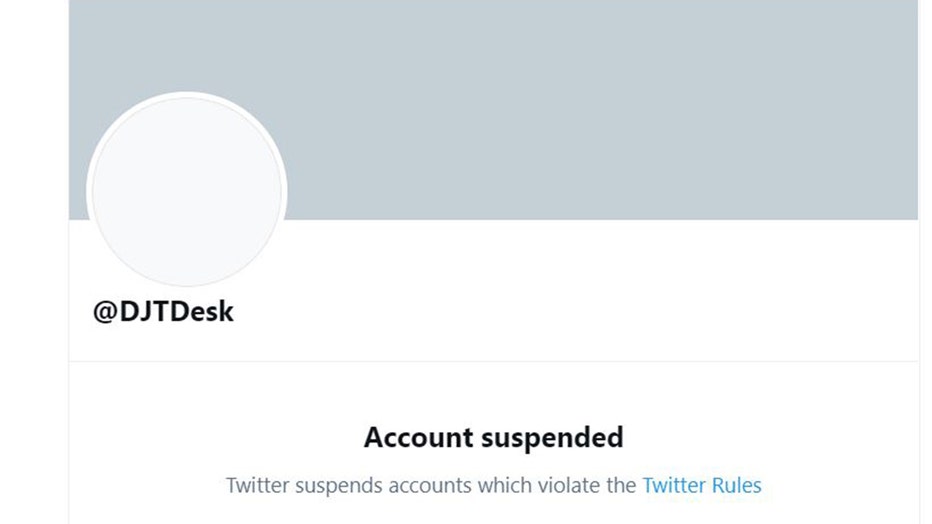 The suspension of the @DJTdesk account came one day after a Facebook-appointed oversight panel upheld the ban of Trump on its platforms, but added that the company should reassess and make a final decision in six months.

Facebook’s Oversight Board ruled that the social network was right to ban Trump in January, saying he "created an environment where a serious risk of violence was possible."

During the riot, Trump posted a message to his followers at the U.S. Capitol that said "We love you. You’re very special," calling them "great patriots" and said "remember this day forever."

The panel found the posts "severely" violated Facebook’s and Instagram’s rules by praising or supporting people engaging in violence. Four people died during the riot and several more were injured. A fifth person, a Capitol Police officer, died shortly after the riot and was later found to have died from natural causes.