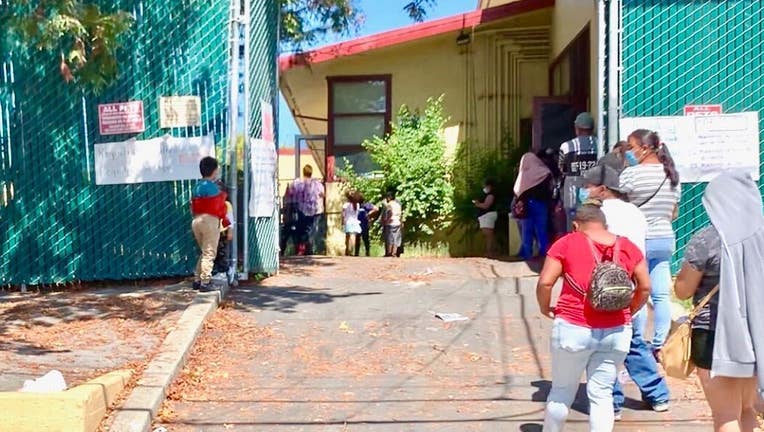 Families get registered for school at Global Family in Oakland in person because many don't have computers at home.

OAKLAND, Calif. - In many ways, Johanna and her first-grade son are just like the other millions of California children heading back to school.

They’re wondering who his teacher will be at Global Family Elementary School in Oakland, what the homework load will look like and if he’ll be in the same virtual class as his friends.

But in so many other ways, the tale of Johanna and her son, who asked that their full names not be used, is so much different than others -- especially families who are well-off enough to hire private tutors and create in-person "pandemic pods" to supplement their children's’ distance learning this fall, and possibly beyond.

For one, she’s an undocumented immigrant who said Comcast won’t connect her to the internet because she doesn’t have a Social Security number or credit card.

And two, she is a single mom and an essential worker. Her job was cut down to two days as a cook at a Mexican restaurant and because Oakland Unified School District has yet to put out the class schedule, she has no idea how to manage her shifts and care for her first-grade son, who will be studying at home. Classes start Monday. And for the first time in history, they will be completely online because of the coronavirus pandemic.

“I am not feeling good about it,” she said in Spanish, speaking through a translator. “I don’t feel prepared.” 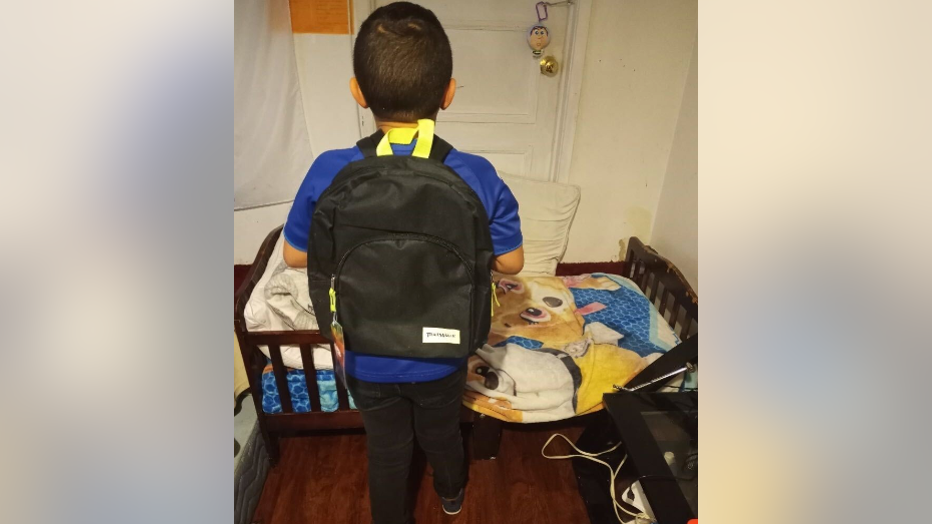 A first-grader got a free backpack before attending Global Family Elementary in Oakland.

Even as Gov. Gavin Newsom and California Superintendent of Schools Tony Thurmond, along with OUSD, have been scrambling to bridge the digital divide by allowing schools to apply for a total of $5.3 billion for distance-learning funding, there are hundreds of thousands of children across California who still don’t have the proper access to technology and Wi-Fi.

In Oakland alone, half the nearly 58,000 children don’t have adequate internet access, though efforts and partnerships with nonprofits, philanthropists and companies are being forged in the 11th hour.

But still, there are unforeseen challenges for those who don’t have the proper paperwork to live in this country and for those whose socioeconomic levels are at the bottom rung.

As Californians look to school, some families form 'pandemic pods;' others struggle for WiFi

Johanna and her son fled El Salvador four years ago, seeking asylum from gang members who she said killed her brother 12 years ago. She had come with her husband, too, but he has since been deported. For now, she and her son are living in Oakland together in the basement of a home near the school. She has hired an attorney to help, and her first court date, she said, is July 2022.

At Global Family, many families are in similar situations; 88% of the students are eligible for free and reduced lunches and 81% are English learners.

Earlier this week, dozens of families lined up at school, hoping to get registered. Most of them didn't have computer access at home and couldn't get through to the district over the phone, so they showed up in person to complete the paperwork.

Sarah Shepich, a kindergarten teacher at Global Family, said that in the spring, only five or six of her 25 students had computers and just eight or so had Wi-Fi. By the end of the year, she said her school had given 306 computers out of a total of 450 students.

Adding to the technological issues, Shepich said she has already been fielding calls from parents who don’t even understand how the apps and programs work, and therefore, can’t help their children log in. Still other families are from Guatemala who speak a Mayan language called Mam, which she doesn't even speak to help them effectively. 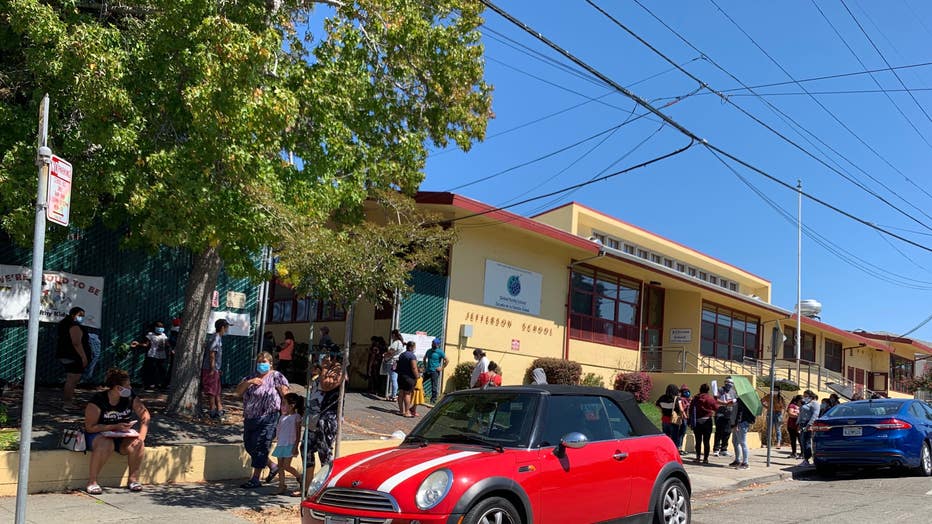 Global Family in Oakland gave out 306 computers in the spring to a total of 450 students.

“How can I train them if they don’t have access and train them on the tech that they don’t know how to use?” Shepich asked rhetorically. “I can’t always help them over the phone. I don’t have a master’s in tech. It’s going to fall on teachers to pick up the slack.”

Tech challenges aside, simply having enough space to learn and live is rough-going for many families.

Shepich said that she had students on Zoom calls while their family members were in the same room. With one student, she could see his dad in the background, sleeping on the couch. Siblings also shared the same room and were doing their lessons nearby.

Despite all the hurdles, Johanna sounds surprisingly optimistic.

She ended up getting a free, loaner laptop for her son from the school. And to get around the Comcast issue, she’s paying a neighbor $20 a month to log in to her account and use her password.

As for her restaurant schedule, Johanna is hoping her employer will be flexible with her and that she can work evenings so that she can be home with her son to help him with school in the mornings. She said a neighbor will watch him when she’s gone, and she’s been making papusas on the side, selling them on the weekends when she can bring her son with her.

“I need to make a strong effort to get my son what he needs,” Johanna said. “There are times when I feel down and want to quit. I have to remain strong. I feel supported by God. I feel like I can overcome and get through this.”