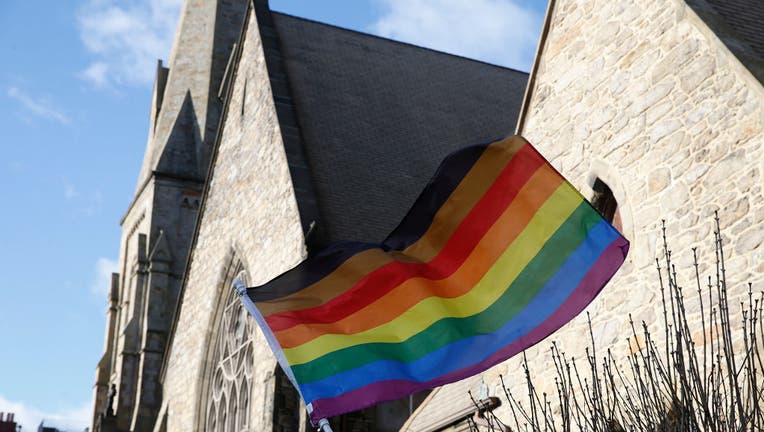 An LGBTQ+ flag flies over Union United Methodist Church in the on Jan. 5, 2020. Conservative congregations opposing same-sex marriage and the ordination of LGBTQ clergy are pushing to leave the UMC to form a new denomination. (Photo by Jessica Rinald

The United Methodist Church’s Council of Bishops acknowledged the inevitable breakup of their denomination – a schism that will widen this weekend with the launch of a global movement led by theologically conservative Methodists.

The breakaway denomination, called the Global Methodist Church, will officially exist as of Sunday. Its leaders have been exasperated by liberal churches’ continued defiance of UMC bans on same-sex marriage and the ordination of openly gay clergy.

Bishop Thomas Bickerton, who became the Council of Bishops’ new president Friday, described the launch of the new movement as a "sad and sobering reality." Bickerton said he regrets any departure from the UMC and values the denomination’s diversity of thought.

"There is no perfect church," he said. "The constant fighting, the vitriolic rhetoric, the punitive behaviors have no place in how we preserve and promote our witness as Christian believers."

He said he prays the infighting will stop, and the UMC will rediscover its mission to make disciples for Christ. He urged the UMC, even as it suffers defections, to think of May 1 as its launch day as well.

Harvey acknowledged the inevitable splintering of the denomination when she preached April 25 during her final address as the Council of Bishops president, "I also realize that it might be time to bless and send our sisters and brothers who cannot remain under the big tent."

A leader of the breakaway movement indicated Sunday’s launch would take place with little fanfare.

"This is the date that we can start receiving churches as they leave the United Methodist Church, and that’s going to occur over a considerable amount of time," said the Rev. Keith Boyette, chairman of the new denomination’s Transitional Leadership Council and a United Methodist minister in Virginia. "It’ll be more of a rolling celebration."

Its transitional doctrine includes a belief that marriage is between one man and one woman, and clergy must adhere to it – a core point of division in the UMC for decades.

Boyette said he expects some churches and pastors to announce Sunday they are joining the Global Methodist Church. He will be among them.

"On May 1, I will no longer be a member of the United Methodist Church," said Boyette, who has already been approved – effective Sunday -- as a clergyperson in the new denomination.

It is easier for clergy to leave the UMC than an entire church, which has to follow a layered process. As a result, Boyette expects the ranks of the Global Methodist Church will grow over time, noting that some who want to join will wait until after the UMC’s 2024 General Conference – and the possible passage of a protocol that spells out details for the breakup.

Boyette criticized the actions of some members of the Council of Bishops, including the decision to further delay the General Conference. He suggested some bishops are intentionally blocking churches from using certain processes for exiting the denomination.

Global Methodist Church organizers had originally expected to launch the denomination only after the next General Conference of the UMC. That legislative body is the only one that could approve a tentative agreement — unveiled in 2020 after negotiations between conservatives, liberals and centrists — to allow churches and regional groups to leave the denomination and keep their property.

But the General Conference, originally scheduled for 2020, was already delayed for two straight years by the pandemic. In March, the UMC announced it was pushing off the next gathering yet again — to 2024 — due to long delays in the U.S. processing of visa applications. A little more than half of the denomination’s members are overseas, notably in Africa and the Philippines.

The United Methodist Church claims 6.3 million members in the U.S. and 6.5 million overseas.

Differences over same-sex marriage and the ordination of LGBTQ clergy have simmered for years in the UMC, and came to a head in 2019 at a conference in St. Louis where delegates voted 438-384 to strengthen bans on LGBTQ-inclusive practices. Most U.S.-based delegates opposed that plan and favored LGBTQ-friendly options; they were outvoted by U.S. conservatives teamed with most of the delegates from Methodist strongholds in Africa and the Philippines.

In the aftermath of that meeting, many moderate and liberal clergy made clear they would not abide by the bans, and various groups worked on proposals to let the UMC split along theological lines.