Census Bureau officials said they were continuing to monitor all operations related to the once-a-decade head count amid the global pandemic.

ORLANDO, Fla. (AP) - A week after starting its 2020 count, the U.S. Census Bureau on Wednesday suspended field operations for two weeks out of concern about the health and safety of its workers and the U.S. public from the novel coronavirus.

Census Bureau officials said they were continuing to monitor all operations related to the once-a-decade head count amid the global pandemic. As of Wednesday, 11 million households had answered the census questions.

Most census workers won't head into the field until May, when they'll knock on the doors of homes that haven't turned in their questionnaires. But some workers are already in the field, primarily working on counts for college students, nursing homes, prisons and other institutions, as well as places with no fixed addresses.

“I don’t think I’ve ever heard of such a suspension, nationwide," said Anderson, a history professor at the University of Wisconsin-Milwaukee. “We’re in uncharted territory on the census, as well as everything else since last Friday."

For most people, the new coronavirus causes only mild or moderate symptoms, such as fever and cough. For some, especially older adults and people with existing health problems, it can cause more severe illness, including pneumonia. The vast majority of people recover from the virus.

This is the first decennial census that has encouraged most people to answer the questionnaire online, although respondents can also answer by telephone or mailing back a form. The Census Bureau is hoping a strong self-response rate will decrease the need for census takers to knock on doors for face-to-face interviews this summer.

"The public is strongly encouraged to respond to the 2020 Census online using a desktop computer, laptop, smartphone, or tablet, and can also respond by phone or mail," the Census Bureau said in a statement. 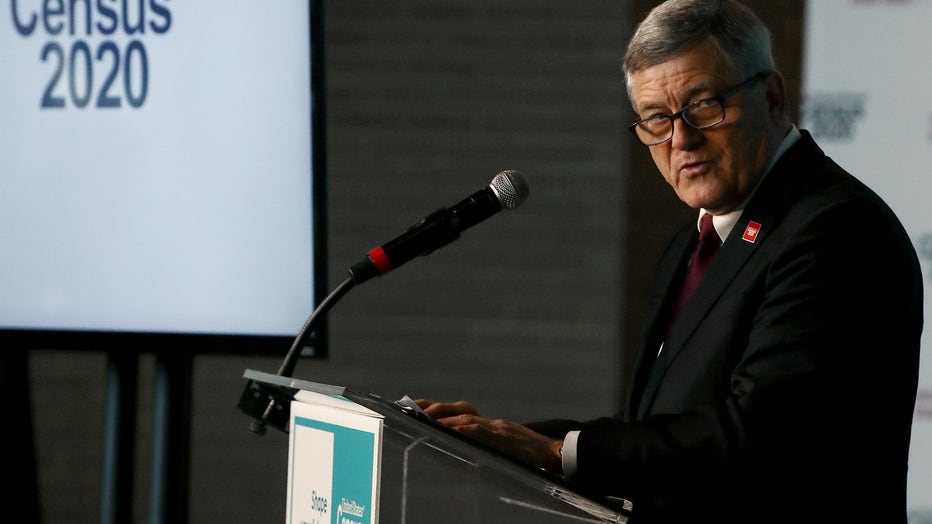 FILE - Steven Dillingham, director of the Census Bureau, speaks while unveiling the advertising outreach campaign for the 2020 Census, on January 14, 2020 in Washington, DC. (Photo by Mark Wilson/Getty Images)

The 2020 census will help determine how many congressional seats each state gets and the distribution of $1.5 trillion in federal spending.

In a statement, the chairwoman of the House Committee on Oversight and Reform said lawmakers were monitoring the suspension of field operations and encouraged people to self-respond.

“By responding now, you will ensure that the Census Bureau does not need to send a census worker to your door," Democratic U.S. Rep. Carolyn Maloney of New York said.