NEWPORT NEWS, Va. - A Virginia man lost his job with a leading national naval manufacturer after refusing to take off his “Trump 2020” hat at a safety meeting prior to a shift, according to local reports.

Dave Sunderland spent about eight years working at Newport News Shipbuilding, a division of Huntington Ingalls Industries, which is the only manufacturer of U.S. Navy aircraft carriers and one of just two firms that produce nuclear-powered submarines.

Despite company policies prohibiting campaigning and political clothing, Sunderland told the Daily Press newspaper in Virginia that he’d worn Trump hats over the past few years without incident and had seen others wearing clothing with Democratic and progressive slogans.

Generally, Sunderland donned his hats between his car and worksite, and sometimes during pre-work safety meetings, he told the Press. During his shift, he wore a hardhat.

But last week, the 55-year-old reportedly refused to take his cap off ahead of a meeting – and received warnings that it broke rules about “campaigning” on the job. 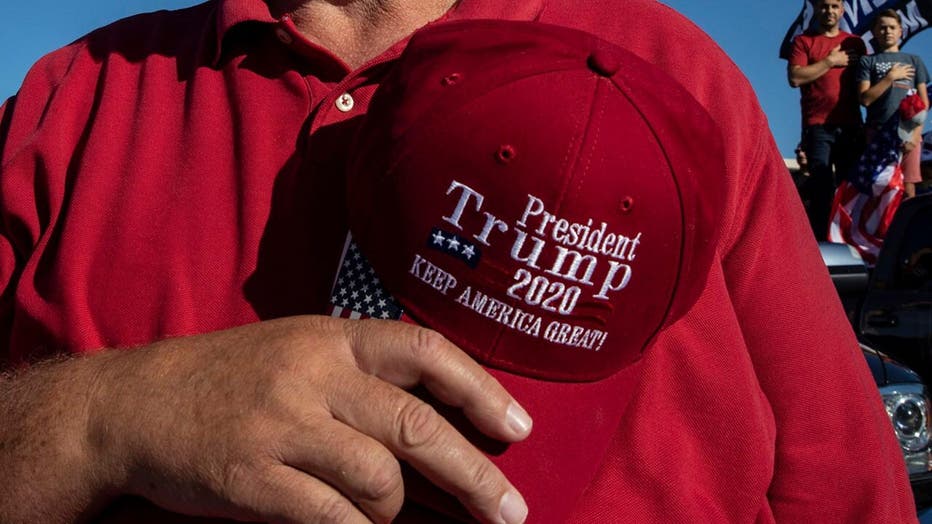 A man takes off his hat in prayer during a rally in support of President Donald Trump on Aug. 29, in Clackamas, Ore. (AP Photo/Paula Bronstein)

“I wasn’t campaigning,” Sunderland told the paper. “I wore a ball cap. I wasn’t passing out bumper stickers. I wasn’t asking people to vote. I wasn’t doing anything, except for wearing a ball cap going to work.”

A supervisor from a different department took issue with the hat and flagged it to a foreman, Sunderland said, adding that his direct supervisor hadn't addressed the cap.

The foreman told him to remove it, and he said no, according to the report. She warned him it would cost him his job. He still refused. Then she called security to have him escorted off the premises. After a brief suspension, he said he was fired.

In a statement, a company spokesperson said policies were implemented to “eliminate anything” that could harm team cohesion in a complex industry.

“These policies and procedures are not specific to any particular election or candidate,” the company said. “Instead, they cover all manner of expression that could cause distractions from our very demanding work.”

Huntington Ingalls Industries is one of the largest military shipbuilders in the U.S. and makes some of the world’s most sophisticated vessels. The Newport News shipyard itself was recently listed among the Military Times’ top employers for veterans, who make up almost 20 percent of its workforce, according to the company.

“Typically, when an issue comes to our attention it is handled quickly and informally,” the company said. “However, if an employee refuses to comply with the policy, it is treated as insubordination and discipline is administered accordingly, up to and including termination.”