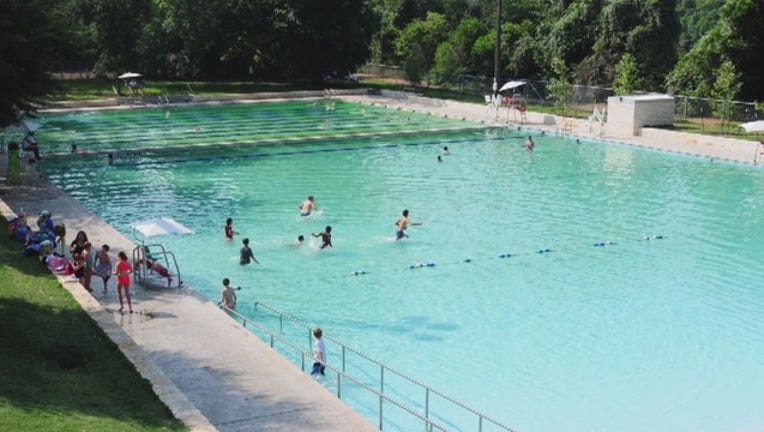 AUSTIN, Texas - A warrant has been issued for a man Austin police say stole an SUV at Deep Eddy Pool Friday afternoon after stealing a cellphone from another patron.

Jess Neely, 57, has been charged with robbery by assault, a second-degree felony, in connection with the theft of a 2007 white Honda Pilot during which the owner of the vehicle was injured.

According to an arrest affidavit, the victim arrived at the pool around 4:45 p.m. June 28 when he noticed a "white male transient," later identified as Neely, carrying a tote approach his SUV and place his belongings nearby.

The transient was described as a man around 50 years old, between 5'10" and 6' and around 220 lbs with broad shoulders, reddish brown shaggy hair and tattoos on his chest and shoulder. The victim said the man was wearing reddish orange shorts and was shirtless, says the affidavit.

The victim had gone for a 30-minute bike ride before returning to swim laps where he placed his towel, glasses and car keys on the wall on the pool as he always does, according to the affidavit. The man says that while swimming, he did notice the transient in the pool area briefly, but did not pay attention to him. He retrieved his glasses and towel after finishing his laps, but noticed his car keys were missing.

He searched the area and his locker for his keys without finding them, and according to the affidavit, confirmed his SUV was still parked in the lot. He talked with pool staff who told him police had recently stopped a man who had stolen a cellphone from another patron.

The affidavit says the victim suspected the alleged thief might be the same man he'd seen near his car. He looked and saw the man's property by his car and the man rummaging in the area.

When he returned to ask pool staff to use a phone, the victim heard a car alarm go off by his SUV, so he ran towards his car, where he saw the transient's belongings no longer next to the Pilot and the man in the driver's seat with the SUV on, says the affidavit.

The victim opened the driver's door to demand the man get out. The man put the SUV into reverse and began backing out of the parking spot with the victim trapped in the door jamb between the door and the body of the Pilot. The man then turned the car, backing over a curb, onto the sidewalk and into the dirt. The victim fell backwards and lost his footing and the man peeled out and the door closed, says the affidavit.

The victim stated in the affidavit that even though he had adrenaline from the situation, his leg did hurt when he fell.

An Austin police officer was nearby because of the original call about the cellphone theft. The officer says a witness saw the thief, identified as Neely in the affidavit, take the owner's cellphone from his belongings in the pool area. The witness and owner had confronted and followed Neely until the officer arrived, detained Neely and saw the cellphone in an open pocket of Neely's bag in plain view.

The cellphone was returned to the owner and the owner declined to press charges so Neely was released. The officer says that while he was writing his report, he heard a commotion at the pool. The victim of the second incident provided the officer with a description of the suspect, which matched Neely's description.

The victim also identified Neely in a photographic lineup and footage of Neely from the officer's body camera matched the victim's description of the suspect exactly.