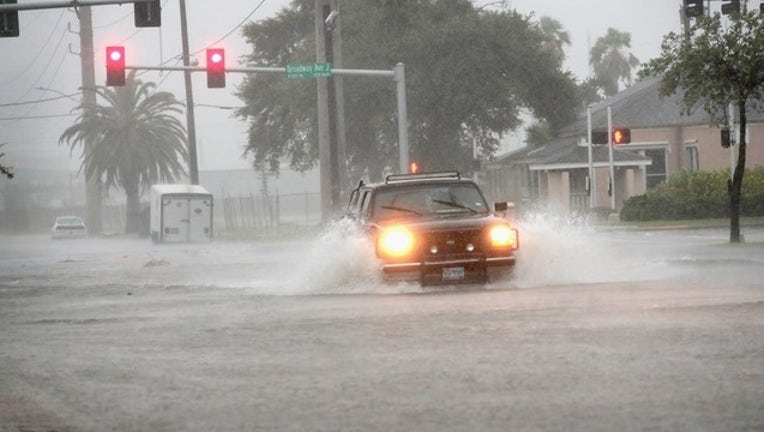 A vehicle navigates a street flooded by rain from Hurricane Harvey on August 26, 2017 in Galveston, Texas. (Photo by Scott Olson/Getty Images)

Damage was nothing compared to the toll in Texas, and had been light through sunset Monday. But a heavy band of rainfall Monday night proved too much for some Lake Charles neighborhoods, pushing water into houses that local residents said they'd never seen flood.

Lake Charles Fire Department Division Chief Lennie LaFleur said rescuers evacuated hundreds of people from one neighborhood, sometimes through chest-deep water. In addition to National Guard trucks and wildlife agents' boats, residents came out in jacked-up trucks and clinging to the cab of a semi-truck cab. They carried belongings in suitcases, trash bags or even soggy cardboard boxes.

"We all got stuck back there," said Andrea Boutte, who rode out on the big rig. "Those boats took forever."

Rescuers focused at first on people with medical problems or who were frail, but eventually offered to take everyone who wanted out. Most people went to homes of friends and relatives. Christopher Booker was waiting to pick up his pregnant daughter, who began calling Booker when water rose above the bottom of her car.

"We've been talking for probably like the last two-and-a-half or three hours," Booker said.

The flooding caught neighbors by surprise because the subdivision of one-story homes is not known for flooding. The waterway that drained the area, though, spilled out of its banks.

"I've seen some floods, I've seen water come up, but nothing like this," LaFleur said.

"We just can't take any more," Calcasieu Parish Sheriff Tony Mancuso said, urging residents to leave flood-prone homes Monday. "Anything we get is going to be crucial at this point."

Floodwaters crept over roads toward homes in Brenda Bradley's neighborhood in Moss Bluff, a suburb of Lake Charles, the region's largest city. The 72-year-old woman and her husband Jimmie had stacked sandbags at their doors as water lapped at the steps of their back porch.

"We've got to try to save what we can," said Bradley, whose home flooded with several inches (centimeters) of water in 2006. "We're in our 70s and there's no way we can lift all (our) furniture up."

Much of the region got a break Monday afternoon after an earlier dousing, with a few hints of sunshine. Water drained out of streets into ditches and low areas. But manhole covers in downtown Lake Charles were bubbling, and officials remained worried that storm surge and high tides could slow drainage across the flat plain of southwestern Louisiana.

"Storm surge is going to be a factor," said Andy Patrick, meteorologist in charge of the National Weather Service office in Lake Charles. "The water is going to be there and it's going to be hard to drain out."

Although Louisiana doesn't appear to be facing a threat on par with Harvey's catastrophic toll in Texas, images of flood devastation in Houston revived painful memories for survivors of Hurricane Katrina, which made landfall in the Gulf Coast on Aug. 29, 2005.

"It really evoked a lot of emotions and heartbreak for the people who are going through that now in Houston," Ray Gratia said as he collected sandbags for his New Orleans home, which flooded from the massive hurricane that left much of the city underwater for weeks.

Rhonda Wylie loaded sandbags into her car with help of firefighters Monday as rain bands neared New Orleans. Wylie's home flooded earlier this month during a deluge that exposed problems with the city's pump and drainage system. New Orleans was on the outskirts of Harvey's rain bands Monday, but residents were on edge because the pumping system still wasn't working at full capacity.

"I just felt like I needed to take all precautions this time," she said as homeowners picked up sandbags from local fire stations.

New Orleans Mayor Mitch Landrieu said a recently repaired pump failed Monday during Harvey's heavy rains. Landrieu added that most pumps were working, and the city is continuing with efforts to improve the pumping system.

Louisiana Gov. John Bel Edwards told reporters Monday that he expects the threat to rise as outer rain bands sweep into Louisiana, adding, "This is going to play out over several days."

Donald Jones, a meteorologist with the National Weather Service office that covers southwest Louisiana said the area could get 10 to 15 inches (25 to 38 centimeters) more rain through Wednesday.