Washington Commanders rookie running back Brian Robinson Jr. was shot during an attempted robbery or carjacking, the team said Sunday.

WASHINGTON - Washington Commanders rookie running back Brian Robinson Jr. remains hospitalized and is recovering after he was shot in Northwest Washington, D.C. during what police believe was an attempted robbery.

On Monday, D.C. Police Chief Robert Contee addressed the shooting and said Robinson Jr. exited a location in the 1000 block of H Street around 6 p.m. Sunday when he was approached by two armed teens – believed to be between the ages of 15 and 17.

Contee said the two teens attempted to rob Robinson Jr. He said Robinson Jr. struggled and wrestled a firearm away from one of the suspects before he was shot twice in the leg by the second person.

Contee said detectives are still going through other evidence in the case.

The Commanders posted an update from Robinson Jr. Monday on Twitter showing what appeared to be a view from his Medstar Washington Hospital Center room with the words, "Surgery went well! Thanks for the prayers! God is Great!"

"I think people should feel safe. But when you have these types of incidents that happen in our community – and certainly when these situations are reported – they make people feel less safe when you have someone who uses a firearm, in broad daylight, in any of our communities," he said.

"These things like this – when you talk about people using firearms in communities – that makes people feel unsafe. We want to be there to support community members – but also lock up bad guys and hold them accountable for their actions," he added. 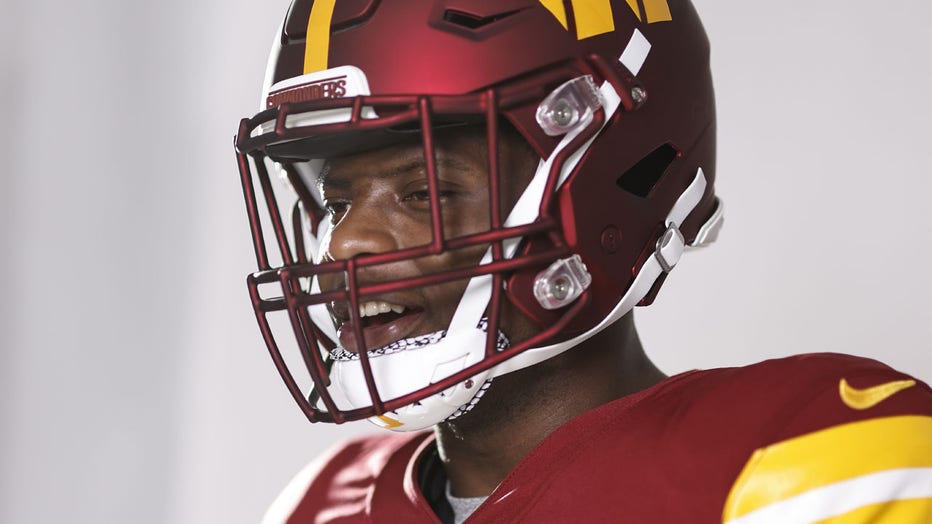 Brian Robinson Jr. #8 of the Washington Commanders poses for a portrait during the NFLPA Rookie Premiere on May 21, 2022 in Los Angeles, California (Photo by Michael Owens/Getty Images)

D.C. Mayor Muriel Bowser said she is confident that detectives will find the people responsible for the shooting. "Any person – regardless of their age – who uses a gun – needs clear and certain consequences," Bowser said Monday.

The team released the following statement:

"We have been made aware that Brian Robinson, Jr. was the victim of an attempted robbery or carjacking in Washington, D.C. He sustained non-life-threatening injuries and is currently being treated at the hospital, where Team officials are on-site with him. We ask that you please respect Brian's privacy at this time."

"I just got done visiting w/Brian. He is in good spirits and wanted me to thank everyone for their kind words, prayers & support. He wants his teammates to know he appreciates them all for reaching out and he loves them all & will be back soon doing what he does best."

Robinson Jr., 23, was drafted in the third round by the Commanders in the 2022 NFL Draft. He has been performing well at training camp behind running backs Antonio Gibson and J.D. McKissic.