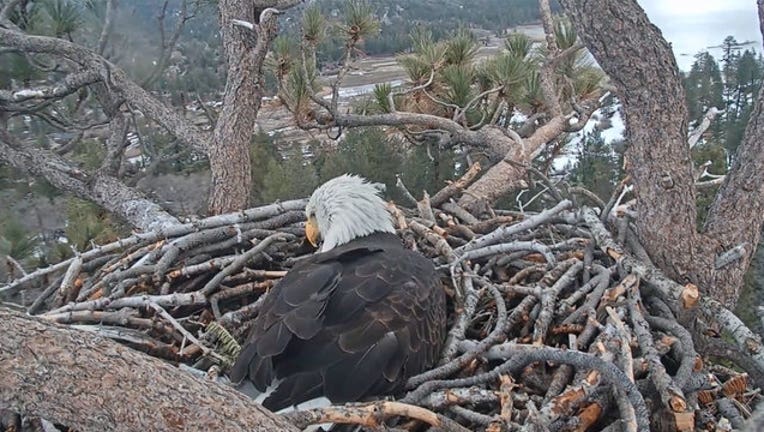 BIG BEAR, Calif. (FOX National) - Jackie, a mother bald eagle patiently awaits in her nest in Big Bear Calif., just 100 miles outside of Los Angeles, ready to lay her second egg of the year. The first egg hatched on March 6, with a hatchling expected early April. Jackie and her mate Shadow will share incubation duties for the next month or so until the eggs hatch. Typically, Eagles mate for life but there have been rare cases of them changing mates spontaneously. Jackie and Shadow are both five years old. Eagles typically live in the wild for about 20 years.

The Forest Service eagle counts have been occurring for the past 30 years, tracking bald eagles who have come down to Big Bear for food and a warmer climate.

Jackie, originally named Jack who hatched in 2012 was at first thought to be male, but when she grew bigger than her parents it was confirmed she was a female.

Last year, Jackie gave birth to two chicks, Stormy and BBB but unfortunately only Stormy survived the testing weather conditions. Unlike most of the eagles who are not tagged, Stormy was successfully banded at 8 weeks old and is able to be identified by the purple band around her ankle. She made worldwide fame thanks to the U.S. Forest Service press release about her survival.

Currently, a live stream is capturing the incubation process of the two parent eagles.

The cameras are solar powered, so some noise comes from the batteries recharging which the Eagles cannot hear, but can be heard in the system. A biological tree-climber was hired to install the camera so that it would properly acclimate to the environment and not disturb the eagles. The nest is about 120 feet high.