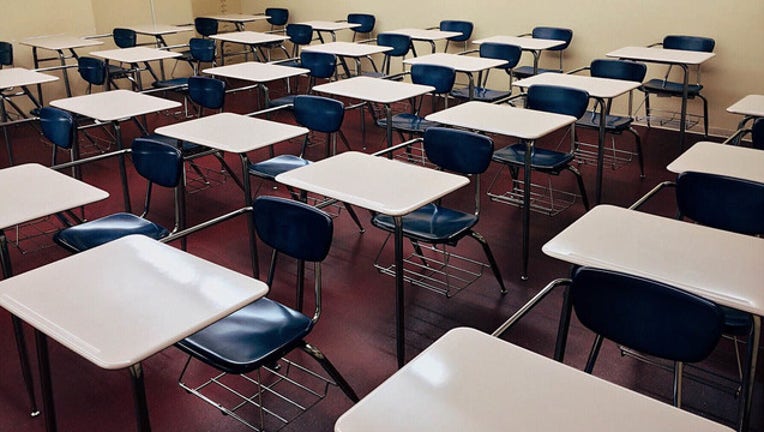 CHARLESTON, W.Va. (AP) — Thousands of striking schoolteachers who have shut down West Virginia classrooms for days are demanding a face-to-face meeting with the governor and legislative leaders on their pay grievances, a union official said Monday.

Teachers rallied Monday outside the state Capitol amid pledges to continue the walkout that began Thursday, unless their complaints are heard. The state's average teacher pay ranks 48th in the nation and teachers are balking at planned increases they say are too stingy.

The teachers, represented by the American Federation of Teachers, the West Virginia Education Association and the West Virginia School Service Personnel Association, want Gov. Jim Justice and leaders from the state Senate and House to meet with them on their complaints.

Until that happens, the strike by teachers in all 55 counties will continue Tuesday, said Christine Campbell, president of the AFT's West Virginia chapter.

"You've got to come to the table. We can't have five different conversations," Campbell said. Until everyone get together at once, she said, "we're not going back" to the classroom.

She said there have been separate talks with various leaders but not with the governor, who spoke at town-hall style meetings Monday in the cities of Wheeling, Martinsburg and Morgantown. She said union officials have spoken at times with the governor's staff.

Justice talked with teachers and others at three stops Monday in a northern area of West Virginia, where he promised to launch a task force to address education issues within a week to 10 days. He urged them to return to work Tuesday.

The governor, sometimes heckled from a crowd of more than 150 in Morgantown, doubted they could get more from their walkout than the 2 percent raise he and the Legislature already approved for next year. He said bigger raises would follow if numbers next year confirm the state's economic turnaround. He also said teachers should push for an increased severance tax on natural gas to permanently fix funding for the insurance program for them and other public employees.

In other developments, State schools Superintendent Steve Paine has said a decision would be made Monday whether to add an item to the state Board of Education meeting Tuesday that would discuss possible legal action against teachers. Paine has said the work stoppage is illegal and disruptive to student learning.

No such agenda item had been added as of Monday afternoon.

The walkout was in its third day Monday. Missed class time is automatically added to the end of the school year.

The Public Employees Insurance Agency, a state entity that administers health care programs for public workers, including teachers, has agreed to freeze health insurance premiums and rates for the next fiscal year for state workers.

The House of Delegates has passed separate legislation to transfer $29 million from the state's rainy day fund to freeze those rates and to apply 20 percent of future general fund surpluses toward a separate fund aimed at stabilizing the employees' insurance agency. Both bills are now pending in the state Senate.

Teachers are worried the proposed solution is only temporary or worse, especially if the state surplus turns out to be minimal.