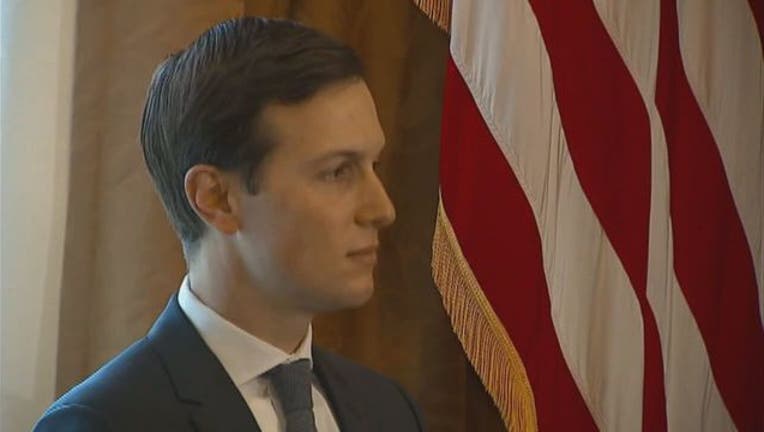 WASHINGTON (AP) — The White House denied Tuesday that senior adviser Jared Kushner is under investigation by the White House Counsel's office over possible ethical or criminal violations in connection with more than $500 million in loans made last year to his family real estate company.

The head of the government's ethics agency had told a Democratic House member that White House lawyers had acknowledged they "had already begun the process" of looking into possible ethics and legal issues spawned by the loans. Kushner met last year with executives from the two companies that made the loans to Kushner Cos.

Even as White House spokeswoman Sarah Huckabee Sanders firmly denied any formal investigation into Kushner, she acknowledged that the White House Counsel's office often plays a role in checking whether ethics guidelines have been met by administration officials.

"While the White House Counsel's office does follow-up with staff to assist with compliance with various ethics standards, it is not probing whether Kushner violated the law," Sanders said.

The acting director of the U.S. Office of Government Ethics, David Apol, did not say Kushner was under formal investigation, but had indicated that he was told by the White House that its lawyers were looking into whether the loans had spurred any ethics or legal concerns. Apol revealed the White House Counsel's role in a letter sent last week to Democratic Rep. Raja Krishnamoorthi, D-Ill.

"The White House indicated to OGE that we are aware of news reports and would proceed as appropriate," Sanders said. "Beyond that, we do not and will not have any further comment."

Kushner is President Donald Trump's son-in-law and has played key roles in the Trump administration's domestic and foreign policy initiatives.

Kushner Cos. has previously defended its role in the two loans. A spokeswoman for Kushner Cos. said Monday the firm had not received any correspondence from the White House.

Citigroup and Apollo Global Management, the two firms that made the loans to the Kushner real estate firm, have insisted their officials did nothing wrong in meeting with Kushner.

In one case cited by The New York Times, Citigroup lent $325 million to Kushner Cos. in spring 2017, shortly after Kushner met with Citi's chief executive, Michael Corbat. Last week, Citigroup's general counsel told several Democratic lawmakers in a letter that the loan was "completely appropriate."

In a second case, Kushner met several times with Apollo co-founder Joshua Harris and discussed a possible White House job — followed by Apollo's loan of $184 million to the Kushner family firm. An Apollo spokesman previously told The Associated Press that Harris "never discussed with Jared Kushner a loan, investment, or any other business arrangement or regulatory matter involving Apollo."

In a separate letter last week to Democratic lawmakers, an Apollo official added that "to our knowledge, Jared Kushner did not play any role on behalf of Kushner Companies with respect" to the loan.

In their letter Tuesday, Krishnamoorthi and Cummings raised concerns that White House lawyers had previously ignored requests for information about Kushner "given the increasing number of allegations about Mr. Kushner using his role in the White House to benefit his family's company."