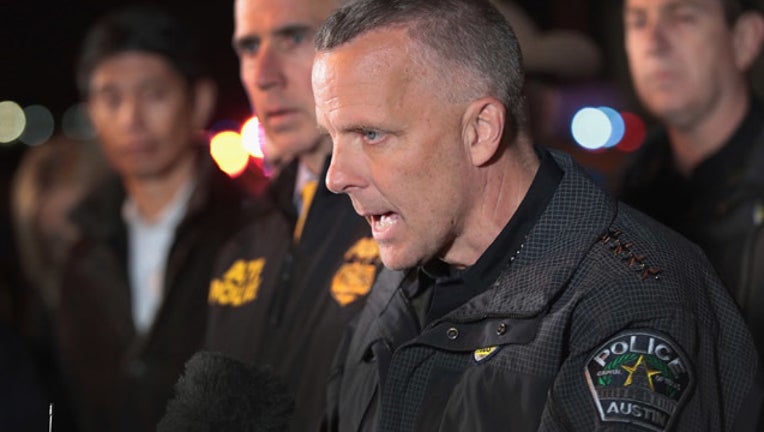 Manley, who has been interim chief since former police chief Art Acevedo left in December 2016, represented the Austin Police Department in front of the nation as local, state and federal authorities worked to find the person responsible for a series of five central Texas explosions that killed two people and injured five more over a three-week span.

Austin City Manager Spencer Cronk would need to make the official appointment, which City Council would then confirm or veto. Cronk did not immediately return calls for comment.

When asked whether he would approve an appointment of Manley to permanent chief, Adler responded with support.

“I’ve always been a fan of his,” Adler said.

Tovo applauded the “around-the-clock” effort from the Austin Police Department over the last three weeks.

Tovo said she would “absolutely” support an appointment of Manley as permanent police chief, who she called an “extremely good leader.”

“Manley provided great leadership to the force and they proved that they are the bests [police force] in the country,” Tovo said. “There is a significant amount of support [for Manley] out there in the community and it predates the last three weeks.”

In a written statement, Troxclair said the leadership and professionalism she has known Manley for were “invaluable” through the public safety crisis.

“I would wholly support [Interim Police Chief Brian Manley] to permanently fill the position should Manager Cronk choose to recommend him,” Troxclair said.

“[Manley] is eminently qualified and has done a superb job since assuming those responsibilities when Chief Acevedo left for Houston,” Pool said. “Manley has my full support.”

Flannigan said the length of time that Manley has been interim does not reflect his performance, but rather the difficulty the city had in hiring a permanent city manager.

Through the city manager search process, city leaders said they would not appoint a new police chief, but rather allow the new city manager to make the appointment.

Flannigan said given the opportunity, he would support an appointment of Manley to permanent police chief.

“I think Manley did a fantastic job representing our community and leading the department through this difficult time,” Flannigan said.

Garza was the first council member to voice her support for Manley on Wednesday. In a post to the City Council’s message board, she asked Council to put their full support behind making Manley permanent chief and to approve a new contract with the police union.

“Our community has been through what is arguably the biggest public safety crisis we have experienced together as a community,” Garza wrote. “While many watched the news safely from home, but on edge, the men and women of law enforcement ran to the bombs and explosions.”

Roche said the appointment of Manley to permanent police chief is long overdue.

“Isn’t our community fortunate to have the solid leadership the Manley displayed during this crisis?” Roche said. “He was calm, reassuring, well-spoken. He represented our city very well…I hope it’s not much longer before he is named our permanent police chief.”

Roche said by the way Manley carried himself on the national stage, the city should act fast in making him permanent chief before he his poached by another city.

As Acevedo’s assistant chief, Manley took over as interim in December 2016 after Acevedo left for the police chief job in Houston. On Wednesday, Acevedo tweeted support for his former colleague.