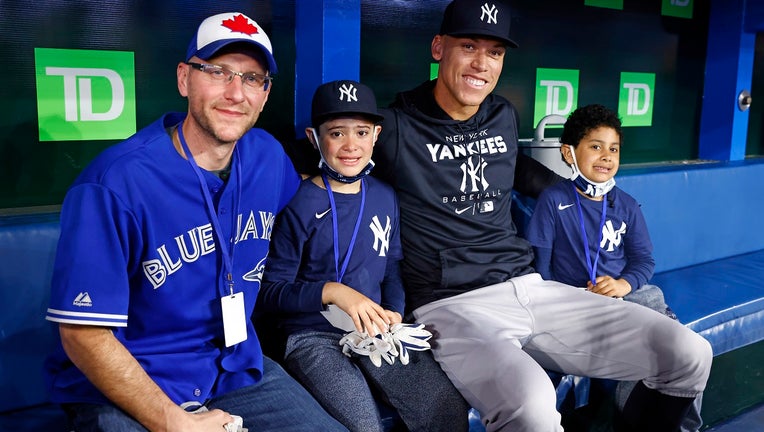 TORONTO, ON - MAY 4: Aaron Judge #99 of the New York Yankees meets with Toronto Blue Jays fan Mike Lanzillotta (L) and Yankee fan Derek Rodriguez, 9, (2nd L) prior to a MLB game against the Toronto Blue Jays at Rogers Centre on May 4, 2022 in Toronto

TORONTO - The young Yankees fan who became a viral sensation this week shed more tears of joy on Wednesday when he met his hero, New York slugger Aaron Judge.

Rodriguez, his family and Lanzillotta were invited onto the field and into the Yankees dugout before Wednesday's series finale against the Blue Jays.

Derek teared up again when Judge stopped by for a quick chat, signed the home run ball and handed over a pair of his batting gloves.

"That’s a moment that’s been seen around the world now," Judge said of the emotional exchange. "It just speaks volumes to the Blue Jays fans they have here. It’s a cool little connection they’ve got."

Yankees second baseman Gleyber Torres also spoke to Derek in Spanish. Derek was born in Caracas, Venezuela, and his family moved to Canada about five years ago.

Derek, who plays shortstop and right field, is named after Yankees Hall of Fame shortstop Derek Jeter. The youngster said he took his prized ball to school Wednesday.

"My friends and my teacher were really happy and they congratulated me," he said. "My teacher even made a presentation where she showed what happened, and people got to touch the ball. It was just amazing."

Yankees spokesperson Jason Zillo said the Rodriguez family and Lanzillotta have been invited to bring a group of nine people each to New York later this season to watch a Yankees game from The Judge’s Chambers seats in right field.