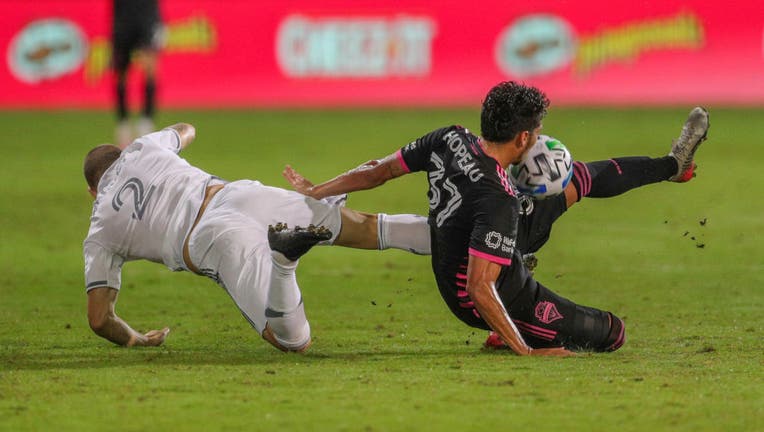 FILE - Los Angeles FC defender Jordan Harvey (2) and Seattle Sounders midfielder Shandon Hopeau (37) collide while going for the ball during the soccer match between the Seattle Sounders and the Los Angeles Football Club on July 27, 2020, at ESPN Wid (Photo by Joe Petro/Icon Sportswire via Getty Images)

The second week of the re-started MLS regular season, like all of professional sports at the moment, took an unexpected turn this week: after some teams were in action Tuesday night, five of the six scheduled games Wednesday night were postponed after players refused to play in solidarity with their fellow athletes in the NBA, WNBA, and MLB, in response to the police shooting and related protests in Kenosha, WI.

​There’s a lot of anecdotal evidence suggesting a great number of MLS fans have only been following the league in the last five years or so, and if that’s the case, it means there’s a great number of MLS fans who don’t know what a long-time Eastern Conference power the Revs have been: five MLS Cup appearances—all defeats—were part of a dynasty in the early 2000’s, and a resurgence in 2014. Now with American coaching legend Bruce Arena in charge, a renewed investment from ownership—the Kraft family, same as the Patriots—in the form of a new training ground and club-record-breaking transfer fees for new acquisitions, there’s a real feeling that the sleeping giant in Foxborough is starting to wake back up.

​Meanwhile, the Red Bulls have arguably been the Eastern Conference dynasty in the years since the Revs last played for a title: three Supporters’ Shield (regular season) titles since 2015, the development of homegrown stars like Tyler Adams—recently the second American man ever to play in the UEFA Champions League semifinals—and one of the most dynamic, and chaotic playing styles, in the league. The Red Bulls at the moment are looking for traction in 2020, and coach Chris Armas—who played for Arena with the national team—recently fired back at critics who (paraphrasing his words) “talk loudly when we lose, but are quiet when we win.”

​The much-anticipated rematch of last year’s Western Conference Final—in which Seattle pulled of a surprising, come-from-behind 3-1 win at LAFC last October—didn’t quite live up all the way last month at the MLS Is Back Tournament: the Sounders came out flat, and after LAFC withstood their second-half charge, it was Bob Bradley’s team cruising home to a 4-1 win.

​What’s surprising then is how each team restarted the regular season last weekend: LAFC were heavy favorites to previously-winless rivals LA Galaxy, but lost 2-0 at home; meanwhile, the Sounders travelled to take on the MLS Is Back Champion Portland Timbers, and earned the biggest win in the last five years of their rivalry series, 3-0.

​With both teams meeting up Sunday night in Seattle, and neither team playing during the week as their respective Wednesday night games were postponed as part of the player protest, this is a classic toss-up of an MLS matchup. The one thing we know for sure: reigning MLS MVP Carlos Vela won’t be a part, having injured his knee against the Galaxy last week.

​Can this be considered a true rivalry when one side has never won? Atlanta have seven wins and two draws in nine all-time, all-competitions meetings, but are currently without their ultimate weapon against Orlando, forward Josef Martinez: seven goals scored in six of those games, but still out after tearing his ACL in the season opener.

​Both teams pulled surprises at MLS Is Back: Orlando by reaching the final, Atlanta by crashing out winless from the group stage, and firing coach Frank de Boer. Atlanta looked the more impressive of the two teams last weekend, beating Nashville 2-0 while Orlando lost to their new rival Inter Miami, before bouncing back with a win of their own against Nashville Wednesday night—the one game to be played that night.

​Before LAFC entered the league in 2018, this was one of the premier rivalry matchups in MLS: the California Clasico, as it remains known by die-hards, these two teams were guaranteed to produce fireworks, especially in their yearly meeting at Stanford Stadium around July Fourth each year. While most of the protagonists of those years have moved on, and the Galaxy have turned their attentions up the highway to their new neighbors, one significant star remains: San Jose’s Chris Wondolowski, the league’s all-time leading scorer (surpassing the legendary Landon Donovan, who played on both sides of this rivalry), who has a career-best 14 goals in games against the Galaxy.

​LA pulled off the upset against LAFC last weekend, and will be trying to carry that momentum through their postponed game Wednesday night into the weekend. The Quakes, meanwhile, haven’t played since their August 1st ouster from the MLS Is Back Tournament: an odd number of teams in the league this season meant they had to wait until this last Wednesday to play, and that game was postponed as well. Can San Jose regain the momentum that saw them reach the quarterfinal in Orlando, even as they’ve been idle for almost an entire month?