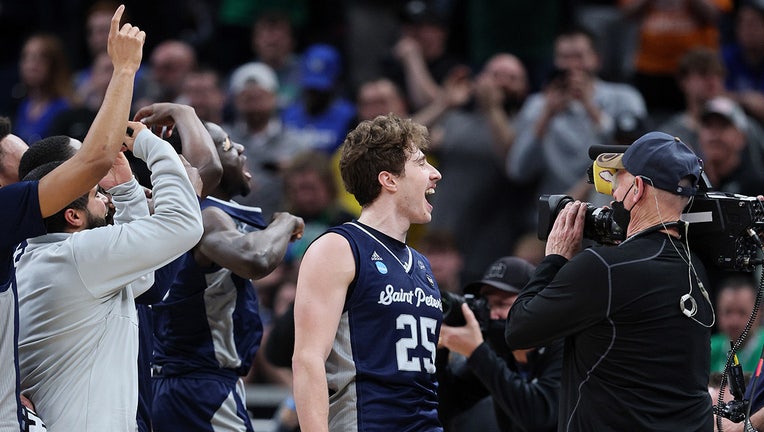 : Doug Edert #25 of the Saint Peter's Peacocks celebrates after the 85-79 overtime win over the Kentucky Wildcats in the first round game of the 2022 NCAA Men's Basketball Tournament at Gainbridge Fieldhouse on March 17, 2022 in Indianapolis, Indiana

INDIANAPOLIS - Tiny Saint Peter’s took down basketball royalty on Thursday night, getting 27 points from Daryl Banks III in an 85-79 overtime victory over second-seeded Kentucky in the first round of the NCAA Tournament.

The Peacocks became the 10th No. 15 seed to win a first-round game since the tournament expanded to 64 teams in 1985 and handed Kentucky its first opening-round loss under coach John Calipari.

Saint Peter’s, the Metro Atlantic Athletic Conference champion, kept it close throughout and Banks’ two free throws with 1:45 left in overtime gave the Peacocks the lead for good. Doug Edert’s layup with 24 seconds left in regulation sent the game to overtime. He also made the final two game-sealing free throws for the Peacocks and finished with 20 points.

Saint Peter’s (20-11) moves on to face either Murray State or San Francisco in Saturday’s second round in the East Region.

Not bad for a private Jesuit school in Jersey City, New Jersey, that’s made half as many NCAA Tournament appearances (four) as Kentucky has national titles (eight).

Oscar Tshiebwe had 30 points and 16 rebounds for Kentucky (26-8) but his pair of missed free throws early in overtime was costly, and the Wildcats lacked a reliable secondary scorer. TyTy Washington Jr. was held to five points on 2-of-10 shooting. 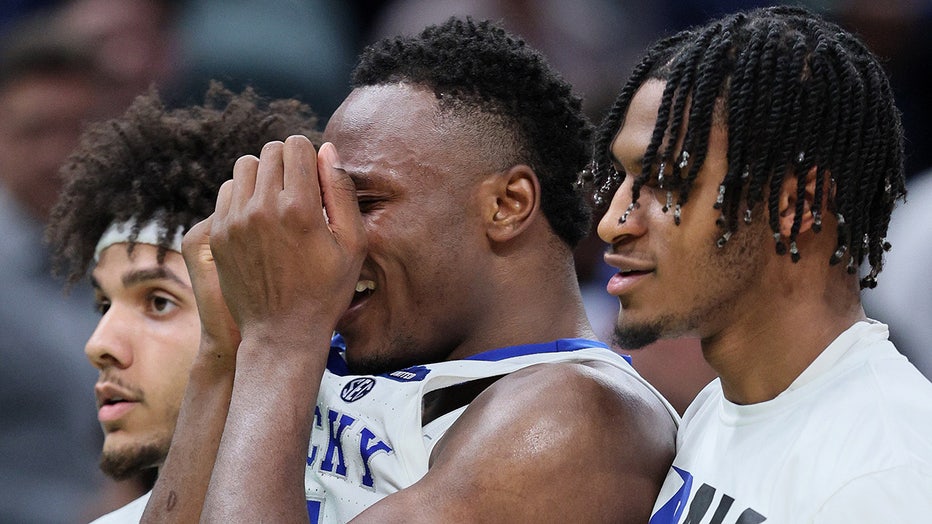 Oscar Tshiebwe #34 of the Kentucky Wildcats reacts with his teammates after their overtime loss to the Saint Peter's Peacocks in the first round game of the 2022 NCAA Men's Basketball Tournament at Gainbridge Fieldhouse on March 17, 2022 in Indianapo

Saint Peter’s: The Peacocks didn’t flinch against their more talented foe, keeping up with and sometimes dictating the pace. Banks’ perimeter shooting was huge in the first half before he came up late in the game and in OT.

Kentucky: The Wildcats had to work for nearly every basket but succeeded at getting to the line. But they struggled moving the ball and missed several key shots that could have won the game. Instead, they're going home early a year after missing the tournament altogether.