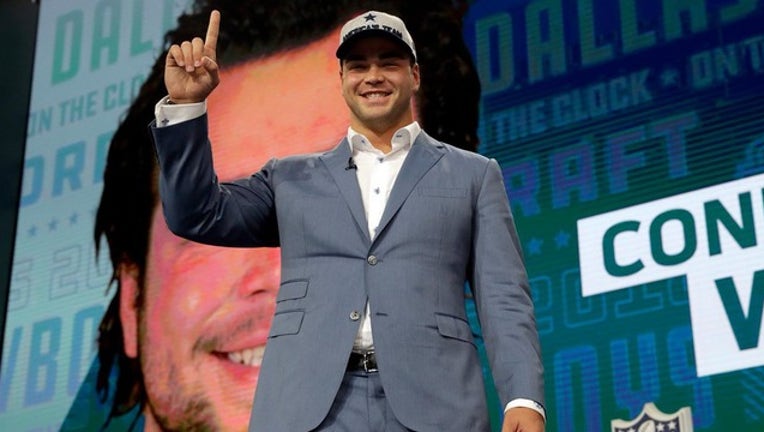 ARLINGTON, Texas - The Dallas Cowboys didn't do anything about the possible departure of Jason Witten on the second day of the NFL draft. They did add a possible replacement for Dez Bryant.

Dallas took University of Texas offensive lineman Connor Williams in the second round and wide receiver Michael Gallup from Colorado State in the third on Friday night amid questions over how they might fill a hole at tight end if veteran Jason Witten retires after 15 season to start a career in broadcasting -- perhaps as ESPN's lead analyst on "Monday Night Football."

Bryant was released as a cost-cutting move this month after three subpar seasons since signing a $70 million, five-year contract following his All-Pro season at receiver in 2014.

The Cowboys took Williams with the No. 50 overall selection, one pick after NFC East rival Philadelphia traded up with Indianapolis to select a South Dakota State tight end named Dallas Goedert.

A consensus first-team All-America tackle as a sophomore, Williams declared for the draft after his junior season with the Longhorns. He started only five games last season because of a left knee injury, and missed the bowl game to prepare for the draft. Williams is the first Texas offensive lineman drafted in 10 years.

When he declared for the draft in December, Williams wrote an essay thanking the bullies who tormented him when he was a child because he was overweight and had a speech impediment. Overcoming that torment, he said, helped him reach his level of success in football.

"There was so much positive feedback," Williams said, "whether it was kids that actually went through the adversity or if it was parents. If there's people that need help like that and keep reaching out, I'm going to do it all day long to help them."

Some teams projected the 6-foot-5, 296-pound Williams as a guard, but the Cowboys could keep him at tackle.

Dallas could use versatility on a line that struggled at times with injuries and ineffectiveness. Williams is the first offensive lineman they've taken as high as second since 2014, when guard Zack Martin was their third first-round O-lineman in four years.

Williams was at the draft in nearby Arlington, just south of his home in Coppell.

Gallup caught a school-record 100 passes for 1,413 yards and seven touchdowns in his senior season.

"I'm not really coming to replace anybody," he said from his home in Monroe, Georgia. "I'm just coming down to compete."

The Cowboys have seven picks over the final four rounds, starting with a pair of fourth-round choices Saturday. They have one pick in the fifth, three in the sixth and one in the seventh. The interior of the defensive line is arguably the biggest need, depending on the view of life without Witten.