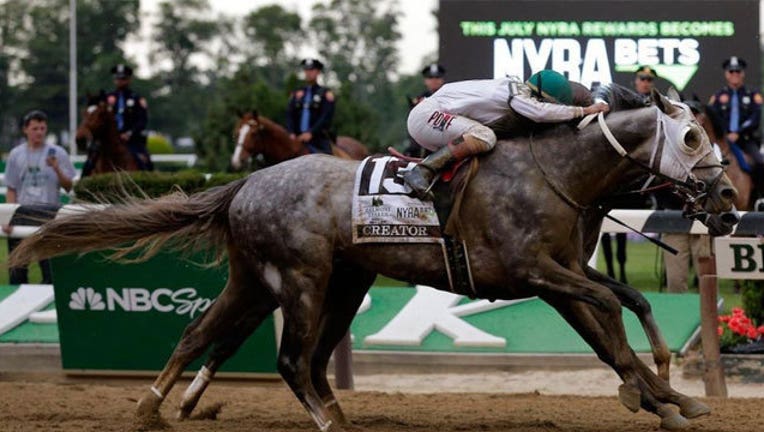 NEW YORK (AP) — Creator closed with a rush and caught Destin at the wire to win the $1.5 million Belmont Stakes on Saturday, with Preakness winner Exaggerator finishing well back in the field.

The 3-year-old gray colt trained by Steve Asmussen came flying down the stretch as Destin tried to hang on to the lead. But it was Creator, who finished 13th in the Derby and skipped the Preakness, who won by a nose. It was the fourth time the Belmont was decided by a nose — the closest possible margin of victory.

Preakness winner Exaggerator was sent off as the 7-5 favorite in the field of 13. He was closer to the lead than usual, but wound up 11th.

A year ago, American Pharoah ran to Triple Crown glory at Belmont Park, but a Triple wasn't on the line this time. Nyquist won the Kentucky Derby, but finished third in the Preakness and did not run in the Belmont.

Creator, ridden by Irad Ortiz, Jr. was one of several closers in the field, and the race set up perfectly for him. Gettysburg was a late addition to the field. Both horses are owned by WinStar Farm, with Gettysburg a front-runner who could set the stage for a dramatic finish.

That's what happened, too. Gettysburg dropped back, and Destin took charge well into the stretch on a hot, sticky day at Belmont Park. With Ortiz urging him on, Creator stormed into contention after running near the back of the pack and won in the final stride.

Lani, the Japan-based colt with a flighty reputation, ran a strong third after finishing ninth in the Derby and fifth in the Preakness.

"I'm glad to see him put that number up; they came to the wire together," said Asmussen, who will be inducted into racing's Hall of Fame this summer. "Irad gave him a dream trip. The horse ran super."

Kent Desormeaux, the Hall of Fame rider aboard Exaggerator, second-guessed his decision to ask his colt to wait behind a slow pace. When he tried to make a move, the colt trained by his brother, Keith, just didn't have it.

"I don't know it there would have been any difference in the outcome," he said. "When I picked him up at the quarter-pole to try and win the race, there was nothing there."

The track was a fast one all day, and the rain held off until after the finish when a downpour soaked the track and a crowd much smaller than the 90,000 that showed up for American Pharoah's Triple Crown.

With the win, Asmussen will go into the Hall of Fame with his first Belmont Stakes win. He won the Preakness twice, with the filly Rachel Alexandra in 2009, and with Curlin in 2007. Earlier in the week, celebrity chef Bobby Flay became a co-owner of Creator along with WinStar.