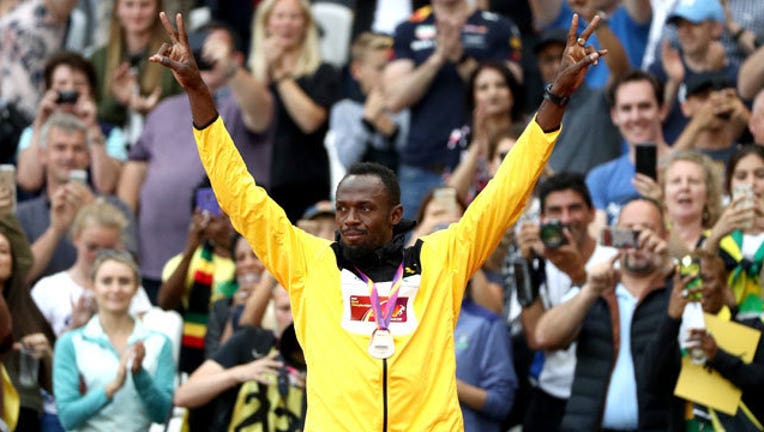 Usain Bolt of Jamaica receives the bronze medal for the Men's 100 metres during day 3 of the 16th IAAF World Athletics Championships London 2017 at The London Stadium on August 6, 2017 in London, United Kingdom. (Photo by Patrick Smith/Getty Images)

LONDON (AP) - Usain Bolt will surrender another world title. This one, without even taking the track.

The Jamaican great is skipping the 200 meters at the world championships, bringing an end to his string of four straight titles in his favorite event.

This was planned. The loss to Justin Gatlin - along with up-and-coming sprinter Christian Coleman - in the 100 meters? Not so much.

So far, Bolt's farewell tour in London hasn't exactly going according to design, and he'll be only a spectator when the heats of the 200 begin Monday. He still has the 4x100 relay at the end of the meet.

"I'm just disappointed I couldn't do better for (the fans), but that's how it goes sometimes," Bolt said after his bronze-medal finish on Saturday. "The support has been outstanding throughout the years."

With no Bolt, the 200 is wide open for the first time since, well, Tyson Gay, held off a rising Bolt at the 2007 worlds in Osaka, Japan.

Waiting in the wings is Wayde van Niekerk, the South African who is currently the world and Olympic 400-meter champion. He's one of the favorites in the 200 as well. The semifinals are on Wednesday and the final is Thursday.

Like Van Niekerk, Isaac Makwala of Botswana is trying his hand at the 200-400 double. He has the top time in the 200 this season and a healthy amount of respect for Van Niekerk.

"Wayde van Niekerk is my brother. We want to conquer the world together and make the final for Africa," Makwala said. "He is so friendly and a lovely guy."

A look at the events from Day 4 of the world championships:

SLAM DUNK: Polish hammer thrower Anita Wlodarczyk's best toss this season is more than 6 meters (20 feet) better than anyone else. The two-time Olympic champion will be the overwhelming favorite to defend her world title.

OF MERRITT: Aries Merritt is one of the feel-good stories of the championships. He won a bronze medal in the 110-meter hurdles with a failing kidney in 2015. Now, with a functioning kidney thanks to a transplant from his sister, Merritt is back in the final. Another hurdler earning a lane is reigning champion Sergey Shubenkov, the Russian who's competing as an independent with his country's team suspended because of a doping scandal. "It will be an interesting final," Merritt said.

HOP, SKIP & JUMP: Caterine Ibarguen of Colombia almost never loses in the triple jump. She's looking for her third straight world title against a field that includes Yulimar Rojas of Venezuela. Ibarguen edged Rojas for gold at the Olympics in Brazil.

FOUR LAPS: Olympic 800-meter champion Caster Semenya of South Africa stepped up to the 1,500 meters and will be a contender for a medal. She's been embroiled in the controversial debate in track and field over women with very high levels of testosterone being allowed to compete. Genzebe Dibaba of Ethiopia is the defending champion in the event.

TAYLOR MADE: American triple jumper Christian Taylor begins his quest for a third straight world title. He's focused on breaking the world record of 18.29 meters (just over 60 feet), set by Jonathan Edwards of Britain in 1995. Taylor's top mark is 18.21 (59-9). Should he ever achieve that, Taylor hinted he might switch over to the 400 meters. "I love the 400," Taylor said. "I would just run with pure joy then, knowing that everything on my bucket list was really ticked off."