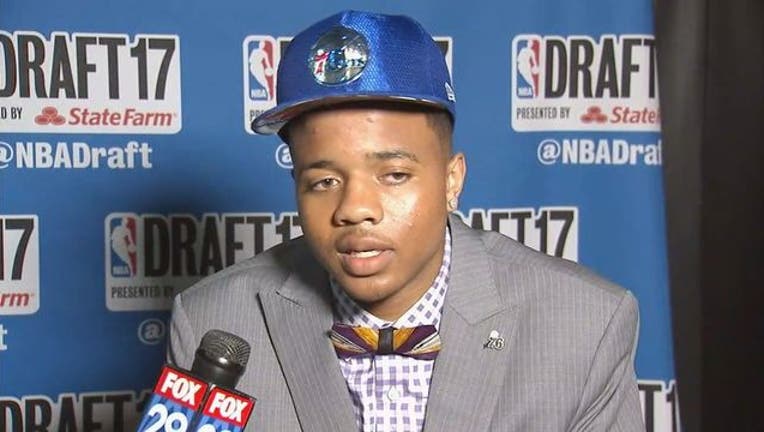 PHILADELPHIA (WTXF/AP) - The Sixers report guard Markelle Fultz was evaluated following an injury to his left ankle that he suffered Saurday night during a Summer League game against the Golden State Warriors.

The team says, “Fultz underwent X-rays, which were negative, and the injury was determined to be a lateral ankle sprain. He will miss the remainder of Summer League and is expected to return to normal basketball activities in 1-2 weeks.”

It happened in the third quarter at Thomas & Mack Center in Las Vegas.

The Sixers’ No. 1 overall pick needed to be helped off the court. He appeared to roll his ankle in the second half and was helped to the locker room by two teammates.

"We'll be as cautious as we can, making sure he's healthy," Sixers summer league coach Lloyd Pierce had said earlier.

It was the last thing the Sixers wanted to see just when they appeared to be ready to put years of misery behind them. They have dealt with significant injuries to center Joel Embiid and last year's No. 1 pick, Ben Simmons, over the last three years.

Fultz, who signed his contract earlier in the day, was taken for X-rays. The former Washington star had eight points in 15 minutes.

"I'm a little bit punch-drunk with the injuries that we've had with our first players selected over the years," head coach Brett Brown said during the ESPN telecast.

But Pierce said he was trying not to look at it that way.

"It's easy to put that on the history that we've gone through, but no, it's just part of the game," Pierce said.

The 76ers pulled off a trade with Boston before the draft in June to move up from No. 3 to No. 1 to take Fultz, the dynamic scoring point guard that GM Bryan Colangelo felt was the perfect piece to put with Simmons and Embiid.

The move energized a fan base that had been worn down by years of tanking under previous GM Sam Hinkie, though his oft-criticized strategy was finally starting to pay off with the accumulation of talent in Philly.

The Sixers also added veterans J.J. Redick and Amir Johnson to supplement the young core and appeared poised to get rolling in the wide-open Eastern Conference.

Fultz averaged 23.2 points last season for the Huskies, tops among freshmen, and added 5.9 assists and 5.7 rebounds per game, the only Division I player to reach those stats.

"I think that he has a tremendous feel for the game," Brown said. "I think that the way he plays and the pace he plays with is going to allow him to play multiple positions. He has proven to be a better shooter than personally I expected."