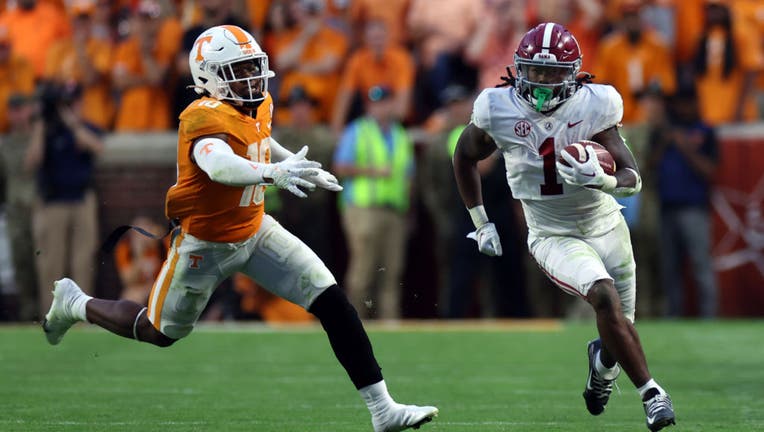 KNOXVILLE, TENNESSEE - OCTOBER 15: Running back Jahmyr Gibbs #1 of the Alabama Crimson Tide runs the ball with linebacker Juwan Mitchell #10 of the Tennessee Volunteers in pursuit in the second half at Neyland Stadium on October 15, 2022 in Knoxville

The University of Tennessee called on the student body, alumni and other fans to contribute in getting new goalposts for Neyland Stadium after fans tossed the old ones into the Tennessee River.

Fans tore down the goalposts after the Volunteers upset Alabama on Saturday night, 52-49. The fans paraded the goalposts through Knoxville before they dumped them into the river. The school sent a tweet on Sunday asking for help in raising money for the new uprights.

"Y'all remember how we tore the goalposts down, hauled em out of Neyland and dumped em in the Tennessee River? Yeah that was awesome," the school’s tweet read.

"Anywho, turns out that in order to play next week's game, we need goalposts on our field. Could y'all help us out?"

NO. 6 TENNESSEE SNAPS LOSING STREAK TO NICK SABAN, TAKES DOWN NO. 3 ALABAMA ON LAST-SECOND FIELD GOAL

Chase McGrath nailed a 40-yard field goal to give Tennessee the win.

Tennessee moved up to No. 3 in the latest Associated Press poll and even received some first-place votes. Georgia remained No. 1 and Ohio State was No. 2.