Julia downgraded to Tropical Storm after making landfall in Nicaragua

Tropical Storm Julia made landfall in Nicaragua early Sunday morning as a Category 1 hurricane, and though the storm has continued to weaken as it spins across Central America, there is a continuing threat of life-threatening flash floods and mudslides across the region.

Julia strengthened into a hurricane on Saturday, just hours before its landfall near Laguna de Perlas, Nicaragua.

The season's fifth hurricane is not expected to threaten the U.S. Gulf Coast because the system will likely be ripped apart by the rugged terrain of Central America as it continues to move inland.

The Atlantic hurricane season has just under two months remaining, so it's not unusual for the tropics to stay active in October. The month ranks as the third-most active (behind September and August) for tropical activity in the Atlantic Basin, typically producing about two named storms each year, one of which becomes a hurricane.

Where is Tropical Storm Julia?

Tropical Storm Julia is centered about 65 miles to the east-northeast of Managua, Nicaragua, and has winds of 70 mph. At the time of landfall as a Category 1 hurricane, Julia had winds of 85 mph.

Tropical Storm Julia is moving to the west at 15 mph, and that motion is expected to continue throughout the day. 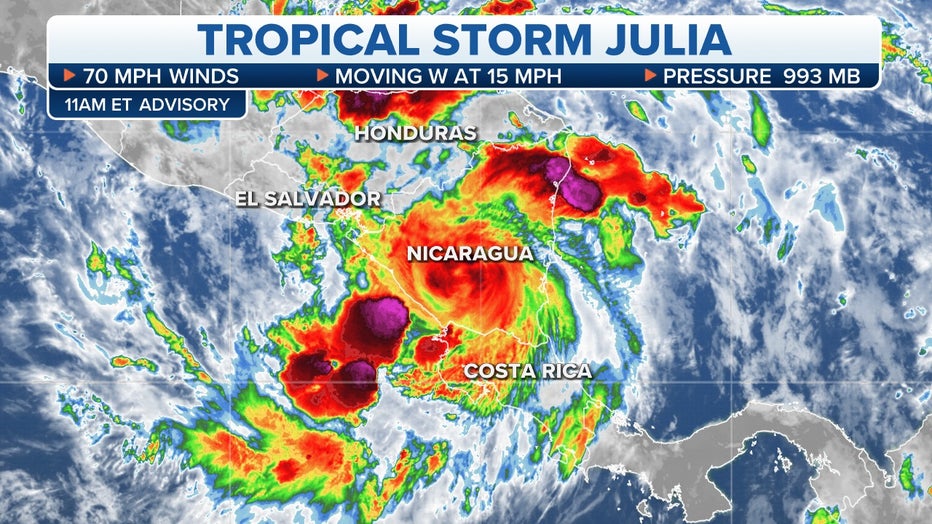 What is the forecast for Tropical Storm Julia?

Tropical Storm Julia is expected to continue to move west through Sunday night, and then the storm is expected to turn to the west-northwest on Monday.

On that track, Julia is expected to move across Nicaragua and emerge over the eastern Pacific on Sunday night.

Julia is then expected to move near or along the Pacific coasts of Honduras, El Salvador and Guatemala on Monday and Monday night.

TROPICAL DEPRESSION VS. TROPICAL STORM VS. HURRICANE: WHAT'S THE DIFFERENCE?

"You'll notice that the cone is fairly skinny, and that is showing less uncertainty to the forecast in comparison to what we saw with Hurricane Ian," FOX Weather meteorologist Britta Merwin said. "The dynamics in the atmosphere are pretty much locked in stone, and so we're not going to see a huge variability with the forecast itself." 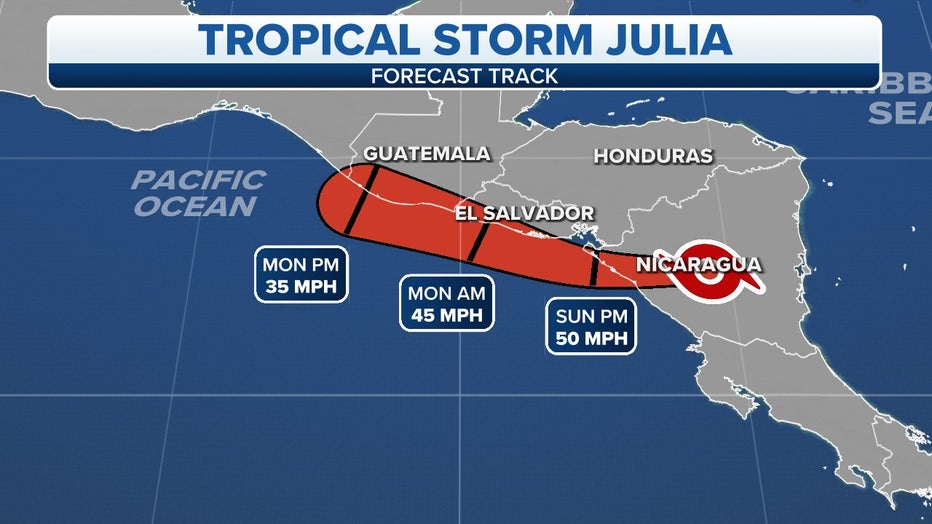 The projected path and intensity of Julia(FOX Weather)

Where are watches and warnings in effect?

As of the Sunday morning update, all Hurricane Watches and Warnings have been discontinued.

A Tropical Storm Warning means that sustained winds of at least 39 mph are expected in the warning area. 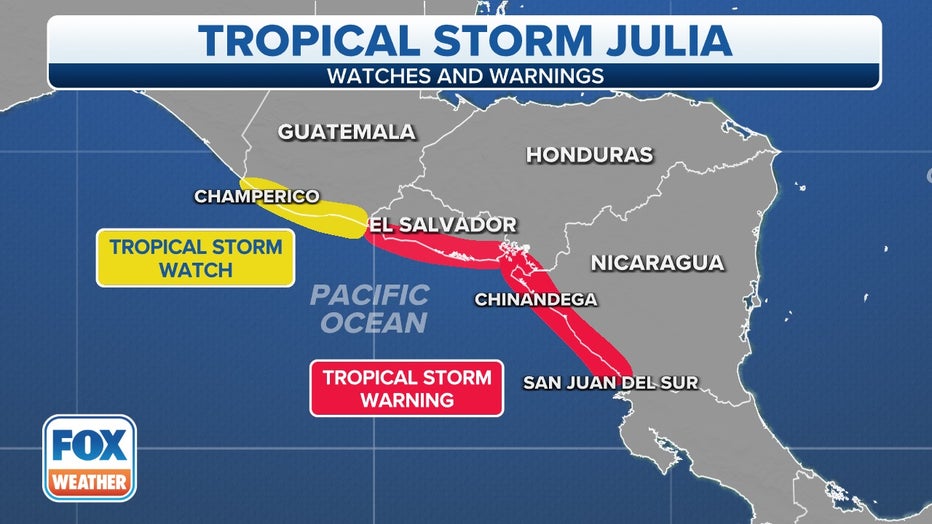 What are the impacts of Tropical Storm Julia?

Strong winds aren't the only threat Tropical Storm Julia poses in the region.

HERE ARE THE BUZZWORDS YOU'LL BE HEARING DURING HURRICANE SEASON

Honduras, Belize, northern Guatemala and the Isthmus of Tehuantepec in Mexico can expect to see 3 to 6 inches of rain, with some locally higher amounts of 10 inches possible.

Southern Guatemala and Costa Rica can expect to see 4 to 8 inches of rain, but some areas could see up to a foot of rain. 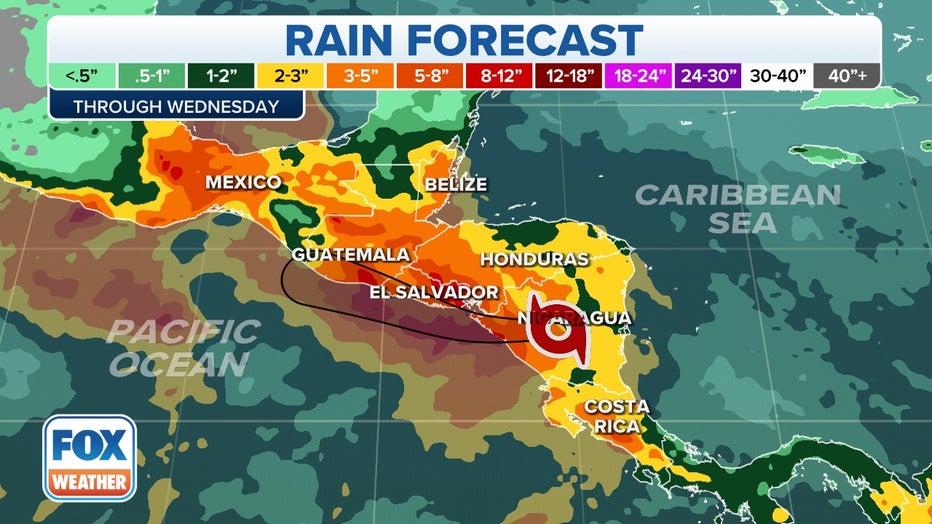 Will Tropical Storm Julia threaten the US?

A blocking high-pressure system remained in place north of Tropical Storm Julia as it tracked across the Caribbean. Because of that, Tropical Storm Julia will keep heading west across Central America before emerging in the eastern Pacific on Sunday night or Monday morning.

"Hurricane Bonnie, if you'll remember, had its characteristics, went over land and continued on," FOX Weather meteorologist Craig Herrera said. "As it continued back over the Pacific, it held those lower-level characteristics, so it maintained its name, Bonnie. We could see this potentially happen again. It will be very interesting to watch. 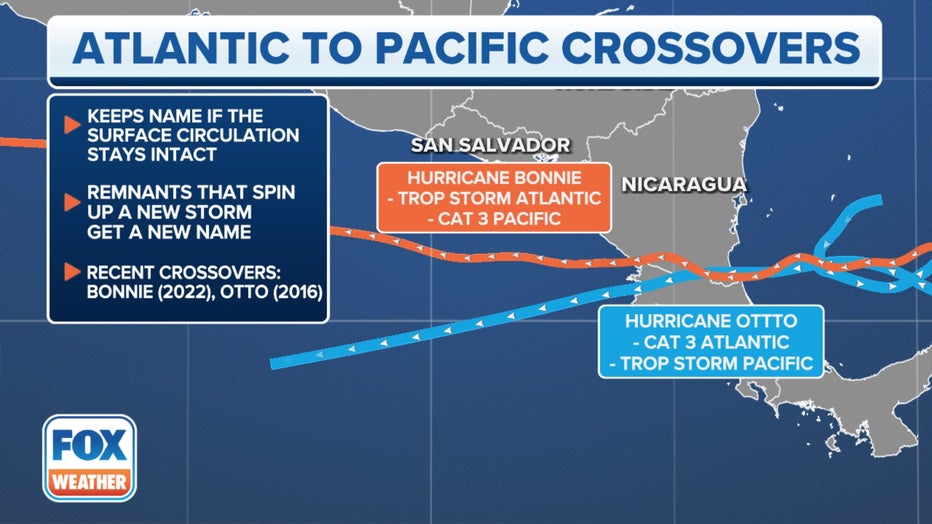 Hurricane Bonnie cross from the Caribbean to the Pacific Ocean.(FOX Weather)

LINK: Get updates and more on Julia at foxweather.com.