This footage shows the river bursting its banks in Mingora and leaving a car partially submerged. (Credit: @PakhtoonYousaf2 via Storyful)

The monsoon season, which began earlier than normal this year, has lashed Pakistan with particularly heavy rains and rescuers have struggled to evacuate thousands of marooned people from flood-hit areas. The crisis forced the government to declare a state of emergency.

RELATED: Elephant rips handler in half in Thailand after working in extreme heat: report

In northwestern Khyber Pakhtunkhwa province, flooding destroyed the gates of a major water control system at the Swat River, leading to flooding in the districts of Charsadda and Nowshera, said Sania Safi, a top administrator in Charsadda. 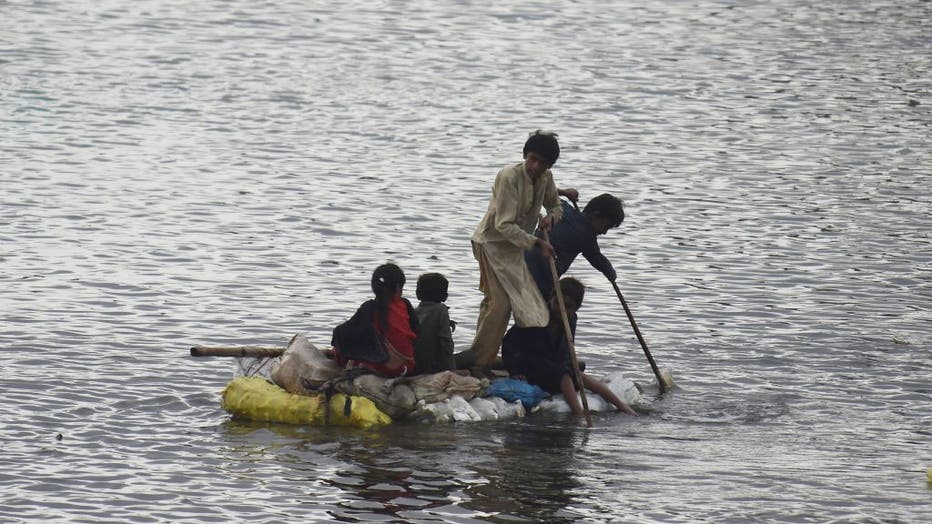 Children use a raft to make their way in a flooded area after heavy monsoon rains on the outskirts of Sukkur, Sindh province, on August 27, 2022. - Thousands of people living near flood-swollen rivers in Pakistan's north were ordered to evacuate on A

"We preempted the situation and warned and forced hesitating residents to leave their homes for safety and move to relief camps established at government buildings in safe places," she said.

Safi said there was concern of further rising of the Swat and Kabul rivers, adding to the misery of residents who have already suffered the loss of lives and property.

"Our administration has evacuated many people and taken others to relief camps where government provided beds and food in safe buildings," she said. ... "We will use police to force those hesitant to leave their homes." 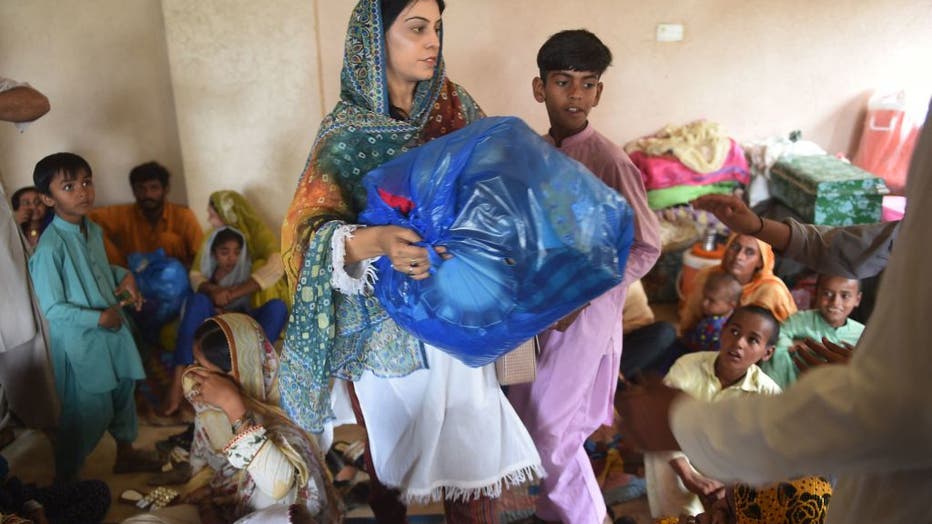 A woman distributes bags with relief items to displaced people from flood hit areas in Sindh province, in a school used as a temporary shelter in Karachi on August 27, 2022. - Thousands of people living near flood-swollen rivers in Pakistan's north w

Khushal Wahab, who lives in a neighborhood in Nowshera submerged in water, said residents recalled catastrophic flooding that took place 2010 and many evacuated fearing similar danger. "People are scared," he said.

"Government has sanctioned sufficient funds to financially compensate the affected people and we will not leave our people alone in this tough time," she said. 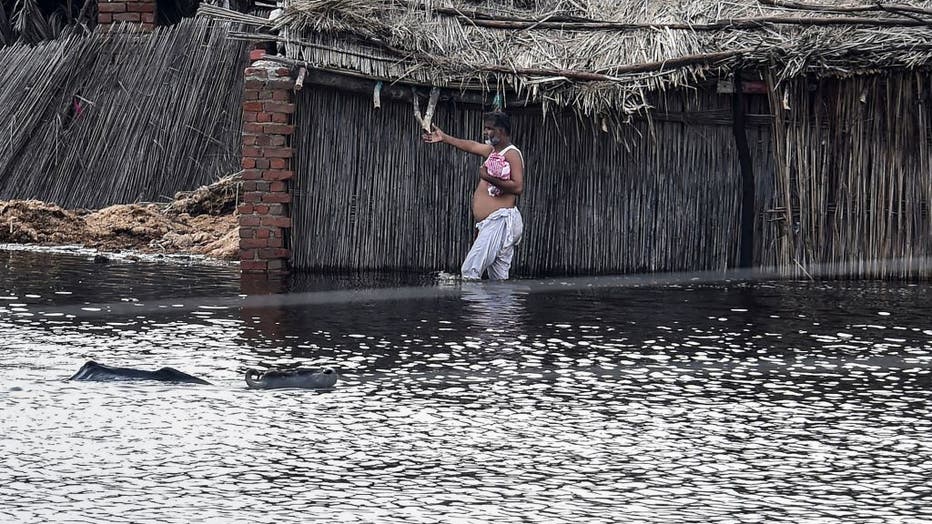 A resident wades across a flooded area after heavy monsoon rains on the outskirts of Sukkur, Sindh province, on August 27, 2022. - Thousands of people living near flood-swollen rivers in Pakistan's north were ordered to evacuate on August 27 as the d

In response to Sharif's appeal for international aid, the United Nations planned a $160 million flash appeal for donations, according to Foreign Ministry spokesman Asim Iftikhar. He said in his weekly briefing Friday that the appeal will be launched Aug. 30.

The picturesque Kalam Valley in Khyber Pakhtunkhwa province is one of the areas most affected by the rains and flooding. Waters from overflowing rivers swept away entire buildings, including an iconic hotel.

"The situation is pretty serious as we don't have any road link left with the rest of the province, we don't have electricity, gas and communications network and no relief is reaching here," said Muzaffar Khan, whose grocery store was swept away along with many other shops.

Thousands whose homes were swept away now live in tents, miles away from their inundated villages and towns, after being rescued by soldiers, local disaster workers and volunteers, authorities said.

In Baluchistan, Asadullah Nasir, a spokesperson at the provincial disaster management authority, said all 34 districts of the impoverished province were badly affected by heavy rain and flooding. He said road networks were destroyed and bridges washed away and relief was only possible by deploying helicopters, which are not often able to operate because of bad weather. He said provincial officials have confirmed 235 deaths but the number was expected to increase significantly after communications are restored.

In eastern Punjab province, the Rajan Pur district appeared to be the hardest hit along with the district of Dera Ghazi Khan. Thousands of mud and brick houses were inundated by water, most of them completely demolished or at least partly destroyed.

Residents made homeless by the flood took shelter on higher ground, where they waited for relief goods and other help.

Rahim Hasan, 52, said he lost his home and two children — a daughter and a son ages 14 and 16, respectively.

"I have nothing left in life, my home was destroyed and my children swept away by gushing water and now we are lying helpless on this road under open sky where soldiers are feeding us," he said. 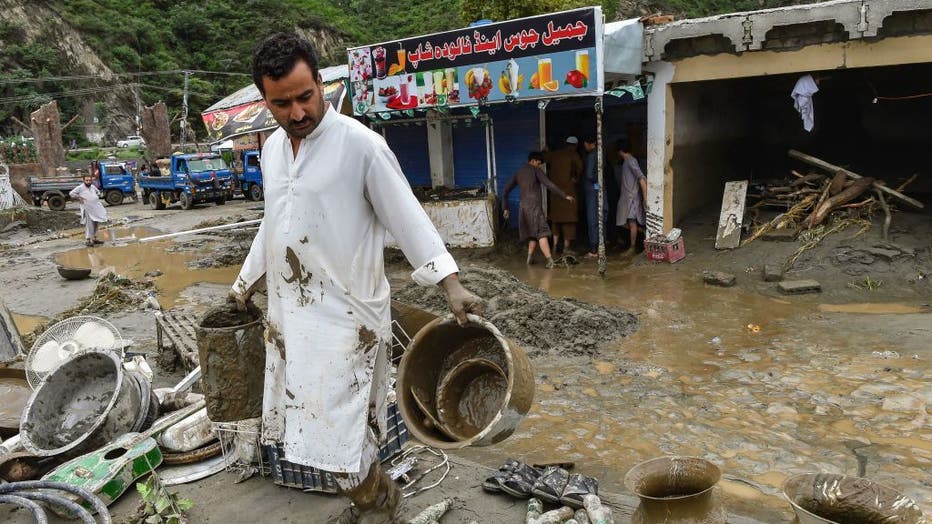 Shopkeepers collect their belongings from the mud after the deluge from near their damaged shops following heavy monsoon rains in Mingora, a town in the Pakistan's northern Swat Valley on August 27, 2022. - Thousands of people living near flood-swoll

The National Disaster Management Authority in its latest overnight report said 45 people were killed in flood-related incidents from Friday to Saturday. That brought the death toll since mid-June to 982 with 1,456 injured.

Monsoon rains were expected to continue this week, mainly in the south and southwest. The season usually runs from July to mid September in Pakistan.

Heavy rains and subsequent flash floods have damaged bridges and road networks across Pakistan, disrupting the supply of fruit and vegetables to markets and causing a hike in prices.

Much of neighboring Afghanistan was also hit by heavy rain and flooding. Mohammad Nasim Haqqani, spokesman for the country's National Disaster Management Ministry, said at least seven people were killed in eastern Nangarhar province over a 24-hour period, and more than 600 others were rescued by Defense Ministry helicopters. The seven in addition to 182 fatalities announced dead earlier in the week.

Associated Press reporters Riaz Khan in Peshawar, Abdul Sattar in Quetta and Asim Tanveer in Multan, Pakistan and Rahim Faiez in Islamabad contributed to this report.