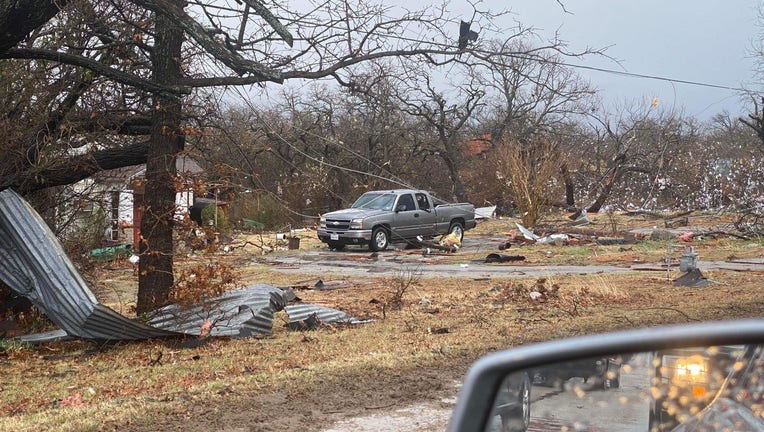 DALLAS - The tornado outbreak that stretched from Oklahoma to Central Texas has turned deadly. A 73-year-old woman was killed in Sherman.

In North Texas, several people were injured and homes, schools and businesses were destroyed. The damage is extensive and widespread, particularly in Jack and Montague counties.

The National Weather Service said it has six crews that will be surveying damage in North Texas over the next few days to try to confirm tornados.

Jacksboro High School saw extensive damage to its gymnasium. The whole roof was torn off.

Two schools in Jacksboro in Jack County were heavily damaged after a reported tornado.

Jacksboro High School saw extensive damage to its gymnasium. The whole roof was torn off.

Jacksboro High Principal Starla Sanders said she was made aware the storm was turning severe just after 3 p.m. So she let the 300 high schoolers who could drive leave early. But the bus riders and all staff were forced to take shelter.

Just moments after the storm passed, Sanders was also told her roof at her house was gone.

"It just brought tears to my eyes. I have lived here for 15 years, and I love this place. It is hard," she said. "Haven’t seen, but I hear I don’t have a roof on my own house. My kids are safe, and my husband is safe and all the students are safe. That is what is important."

14-year-old freshman Emma Gass couldn’t drive to safety, so her golf coach loaded kids up into his car and sped to the middle school just up the road. There, they all took shelter in the library.

"Lots of thunder, chaos, people talking and freaking and anxiety going on," she recalled. "Just a feeling comes over you, and you’re like things can disappear that fast."

Just across from the high school was the elementary school housing 500 kids. Its gymnasium also had walls collapse.

Children waiting for the parents to pick them up were rushed to the interior of the building.

Parents were waiting in the parking lot to pick up kids, but they jumped out of their cars and into the building for shelter. There is now a line of flipped-over cars with the windows blown out.

"We knew the storm was coming," said parent Jessica Gass. "It was expected to be here at 4 o’clock, and school lets out at 3:30. But there were so many cars in line. And as you can see, the parking lot is destroyed. Tons of cars, but everyone is okay and they got inside still waiting to get their kids out. Our kids are okay. Our family is okay. Our friends are okay.

Jacksboro High School and Jacksboro Elementary have extensive damage after a reported tornado. Both schools have storm shelters, so they were able to take cover before the buildings were hit.

"Both of these campuses, our elementary and high school, have storm shelters. We put all of our students and staff and parents into them. They functioned the way they were designed," said Superintendent Brad Burnett. "Thankfully, no injuries of students or staff. I’m not aware of parents who sustained any injuries. We feel very blessed to have that news. Bottom line is we can repair that. I am just so thankful that our students and staff are safe. That was a prayer answered."

There was no damage reported at Jacksboro Middle School, so the students were reunited with their parents there.

Classes are canceled for the rest of the week.

Meanwhile, just across the street from the schools, there is a path of damaged with downed trees and powerlines and destroyed homes. One home had its entire roof ripped off.

Mike Cantrell says he rushed over to check on his 90-year-old mother who was home alone with her dog.

"She called and she was hysterical. She’s doing pretty good from what she dealt with. I don’t know. It’s a mess," he said. "She got in the shelter, her and her dog, and rode it out right there until the wind quit blowing. I was trying to get ahold of someone to come get her out."

County officials estimate around 90 homes were damaged, and an animal shelter was also hit.

First responders had to rescue four people from their homes. Nine people were hospitalized with injuries.

The Jacksboro fire chief said they were lucky to say that no deaths have been reported.

"It is a miracle. However, as has been said, the quick thinking and the decisive action by leaders whether it be in the school or elsewhere, saved lives. We need to recognize the life-saving action when it's taken place and that is because of the outstanding leadership that is here in Jack County," Gov. Greg Abbott said after getting an update on the damage in Jacksboro.

Jacksboro is about 60 miles northwest of Fort Worth.

4 rescued from tornado-damaged homes in Bowie

A search and rescue effort is underway in the Montague County town of Bowie after a reported tornado flattened several homes and destroyed several buildings.

A reported tornado flattened several homes and destroyed buildings in the Montague County town of Bowie.

Storm spotters say a tornado crossed Highway 287 southeast of the town around 5 p.m.

An emergency manager in Montague County reports "a great deal of damage to residences" in Bowie, including reports of "houses flattened" on Salona Highway north of Bowie.

The fire chief says there also reported property damage at the gas plant off Highway 59 just south of Bowie.

Emergency managers reported a structure collapse along Highway 101 and structure damage near Paradise.

There are reports of a great deal of damage to homes along Brushy Road, Bishop Road and Well Service Road.

The Bowie Community Center was opened as an emergency shelter for displaced residents.

FOX 4 Chaser Michael Bear saw as the large wedge tornado crossed over Hwy 287, where several buildings were damaged as well.

What may have been a tornado caused damage in parts of Tarrant County when the storms rolled through.

Viewer Christina Segundo shared video and pictures of damage in River Oaks on the west side of the county.

She said the trail of damage was about two miles long with lots of trees and roof damage to homes and businesses.

Part of a building was on top of a truck and many fences were damaged as well.

Lightning suspected as cause of Southlake house fire

As severe weather came through North Texas, firefighters in Southlake were battling a house fire. potentially caused by lightning.

Lightning may have caused a fire in the Dallas-Fort Worth suburb of Southlake.

The home is in a neighborhood near Byron Nelson Way and Southlake Boulevard.

No one was home at the time, but neighbors called 911 after smelling smoke and hearing an explosion.