President Joe Biden speaks about his administration's plan to tackle record-high inflation in remarks on May 10, 2022.

WASHINGTON - President Joe Biden on Tuesday warned voters unhappy with soaring inflation and his stalled domestic agenda against turning power over to "ultra-MAGA" Republicans in the midterm elections as he increasingly tries to cast former President Donald Trump and his adherents as a political foil.

Speaking at the White House less than six months before the elections, Biden acknowledged that he could "taste" the country’s dissatisfaction with Washington, particularly over rising prices, but he sought to channel the anger against the GOP.

"Look, I know you’ve got to be frustrated," he said. "I know, I can taste it. Frustrated by high prices, by gridlock in Congress, by the time it takes to get anything done.

"The MAGA Republicans are counting on you to be as frustrated by the pace of progress, which they’ve done everything they can to slow down, that you will hand power over to them ... so they can enact their extreme agenda," Biden said.

Biden's branding of his opposition as "ultra-MAGA Republicans" — a reference to Trump’s "Make America Great Again" campaign slogan — has emerged as a White House trope in recent weeks as the White House hopes for a pre-midterms reset for Democrats, who face stiff headwinds heading into the November elections. White House press secretary Jen Psaki said Tuesday that "it’s the president’s phrase."

It is a message seemingly aimed directly at the listless and divided base of Biden's own party, as Democrats struggle to keep their voters motivated, as well as at some moderate voters who still recoil at the memory of Trump’s tumultuous tenure in office.

"Look, I think Biden needs to motivate his base ahead of the midterms. And nothing motivates Democrats like voting against Trump," said GOP strategist Alex Conant. "Trump’s not on the ballot this fall. But Biden is going to try to convince voters that he is." 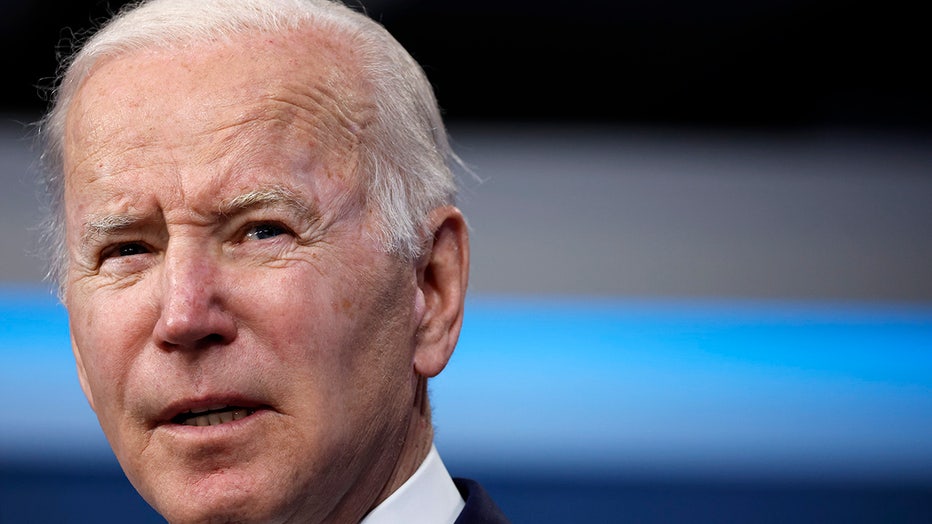 For Democrats, who have unified control of Washington, running against the minority party is risky, as even Biden acknowledged that voters tend to blame those in control for the nation’s state of affairs.

But the White House believes Republicans have thrown them a lifeline, in the form of GOP Sen. Rick Scott’s 11-point plan, released in late February, that would impose a modest tax increase on many of the lowest-paid Americans, while opening the door for cutting Social Security and Medicare.

The plan, meant as a draft governing agenda for when the GOP retakes power, has been rejected by many Republicans, including Senate Minority Leader Mitch McConnell. But that is not stopping Biden and Democrats from trying to tie Republicans to it more broadly. Scott is the chairman of the Senate Republicans’ campaign arm and a member of Senate GOP leadership.

"That’s a plan in writing and he’s in the leadership," Biden said.

Biden argued that the potential tax hikes would make it even harder for families struggling with inflation to afford food, housing and transportation, as prices rise at the fastest pace in four decades.

"I want every American to know that I’m taking inflation very seriously and it’s my top domestic priority," Biden said.

RELATED: Here's how much more you'll be paying for food in 2022, according to USDA estimates

Scott fired back in comments Tuesday, calling on Biden to resign, and deeming him "unfit" for the job.

"I have a plan. I mean, it’s real simple," he told reporters. "I put out my ideas and how we need to rescue this country. He doesn’t have a plan. And you didn’t hear any ideas today. I mean, he says he was going to come up with his ideas and fix inflation."

In recent days, the White House has extended the "ultra-MAGA" label to broader criticism of Republicans on other matters, including the push to overturn the constitutional right to an abortion established in the Roe v. Wade decision of the Supreme Court.

Speaking Monday night at a Democratic fundraiser, Biden tested out the "ultra-MAGA" messaging with donors, referencing Florida Gov. Ron DeSantis’ moves to restrict some textbooks from being used in the classroom and Scott’s plan to require regular congressional reauthorization of social safety net programs.

"This is not your father’s Republican Party," Biden said. This is a MAGA party. This is the MAGA party. And the head of their Republican campaign committee, Senator Rick Scott, the Ultra-MAGA Agenda he put forward, he raises taxes on 70 million people who make well less than $100,000."

On Capitol Hill, Senate Majority Leader Chuck Schumer was echoing Biden's line as he pushed for Congress to enshrine abortion rights into law.

"Now the MAGA Republicans have taken over," he said. "If MAGA Republicans get their way pregnant women can lose their lives because there will be no exception if the life of the mother is at risk."

John Anzalone, a Democratic pollster who has worked for Biden, said it’s important to draw sharp contrasts with political opponents."

"Whether you’re in a governor’s race in Michigan or you’re in a Senate race in New Hampshire, those contrasts become really important, because it’s good for voters to know what each side stands for," he said. "You’re talking to swing voters, without a doubt, because at the end of the day, independents, swing voters, moderates can make or break a cycle for Democrats and Republicans."