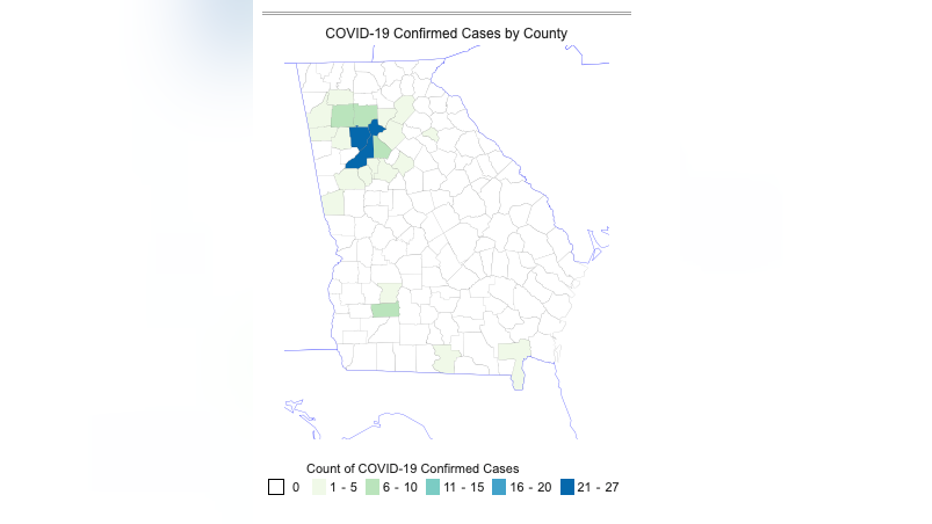 As of Monday at noon, there were 121 cases of COVID-19 in the state. The cases are mostly in metro Atlanta and in northwest Georgia, according to the state Department of Public Health. One person - a 67-year-old man - has already died from the disease.

The cases by county are:

In the report, health officials say that 44 percent of confirmed cases involve people age 60 or older, people who the Centers for Disease Control and Prevention say are at a higher risk of getting very sick from the illness. The World Health Organization has estimated a 21.9 percent mortality rate for those over 80 who are infected with the virus.

Gov. Brian Kemp declared a public health emergency for the State of Georgia Saturday in response to the coronavirus outbreak. The declaration allows resources to be marshaled for the treatment and mitigation of the virus.

The governor's announcement came following President Donald Trump's Friday declaration of a national emergency over the coronavirus outbreak. The president announced $50 billion for states, territories, and localities in the shared fight against the disease.

In Atlanta, Mayor Keisha Lance Bottoms declared a state of emergency within the city limits, banning large public gatherings of more than 250 people until March 31.

Mayor Bottoms joins FOX 5 News at 6 to talk about the impact of the coronavirus on the airport, schools, and jobs.

List of tourist locations closed in Atlanta due to coronavirus

The president also announced that emergency operations centers would open effective immediately. The president said that every hospital is to activate its emergency preparedness plan to meet the needs of Americans everywhere.

"No resource will be spared, nothing whatsoever," the president said, and that half a million additional testing kits would be available early next week. Locations would be announced Sunday night. In the press conference, it was announced that interest on federal student loan payments would be waived during the emergency.

Children’s activities to try at home

Children's Museum of Atlanta shares ways to entertain your kids while they are at home during the coronavirus outbreak.

Georgia is building temporary housing units to house quarantined patients who have nowhere else to go at the Georgia Public Safety Training Center in Forsyth, northwest of Macon.

Georgia lawmakers had already agreed with Gov. Kemp’s plan to dip into the state’s rainy day fund for $100 million that the Republican governor can spend to combat COVID-19.

The $100 million would come from the state’s $2.8 billion in reserves and go to the governor’s emergency fund. Lawmakers said Georgia could use the money to provide a match for federal funds as well as for other state spending. England said there’s an additional $5 million provided to rural hospitals as well to pay for effects of the new coronavirus.

Despite the new money, the plan still cuts $159 million from other spending in the state budget year that runs through June 30.

Public health officials have urged social distancing to slow down or stop the spread of coronavirus. According to the Centers for Disease Control and Prevention, adults who are 60+ and people with serious medical conditioners, such as heart disease and diabetes, are at higher risk of getting very sick from coronavirus.

Chick-fil-A limits service to drive-thru only

Chick-fil-A announced Sunday that restaurants would be limiting service to drive-thru only.