A report found countless failures by police during the school shooting in Uvalde. New body camera video was also released this weekend.

UVALDE, Texas - Elsa Avila slid to her phone, terrified as she held the bleeding side of her abdomen and tried to stay calm for her students. In a text to her family that she meant to send to fellow Uvalde teachers, she wrote: "I’m shot."

For the first time in 30 years, Avila will not be going back to school as classes resume Tuesday in the small, southeast Texas town. The start of school will look different for her, as for other survivors of the May 24 shooting at Robb Elementary School in which 21 people died, with an emphasis on healing, both physically and mentally. Some have opted for virtual education, others for private school. Many will return to Uvalde school district campuses, though Robb Elementary itself will never reopen.

RELATED: Uvalde students return to classroom for first time since shooting on Tuesday

A scar down her torso brings her to tears as a permanent reminder of the horror she endured with her 16 students as they waited in their classroom for an hour for help while a gunman slaughtered 19 children and two teachers in two adjoining classrooms nearby.

Minutes before she felt the sharp pain of the bullet piercing her intestine and colon, Avila was motioning students away from the walls and windows and closer to her. A student lined up by the door for recess had just told her something was going on outside: People were running — and screaming. As she slammed the classroom door so the lock would catch, her students took their well-practiced lockdown positions.

Moments later, a gunman stormed into their fourth-grade wing and began spraying bullets before ultimately making his way into rooms 111 and 112.

In room 109, Avila repeatedly texted for help, according to messages reviewed by The Associated Press. First at 11:35 a.m. in the text to her family that she says was meant for the teacher group chat. Then at 11:38 in a message to the school’s vice principal. At 11:45, she responded to a text from the school’s counselor asking if her classroom was on lockdown with: "I’m shot, send help." And when the principal assured her that help was on the way, she replied simply: "Help."

It’s unclear whether her messages were relayed to police. District officials did not respond to requests for comment on actions taken to communicate with law enforcement on May 24, and an attorney for then-Principal Mandy Gutierrez was not available for comment. 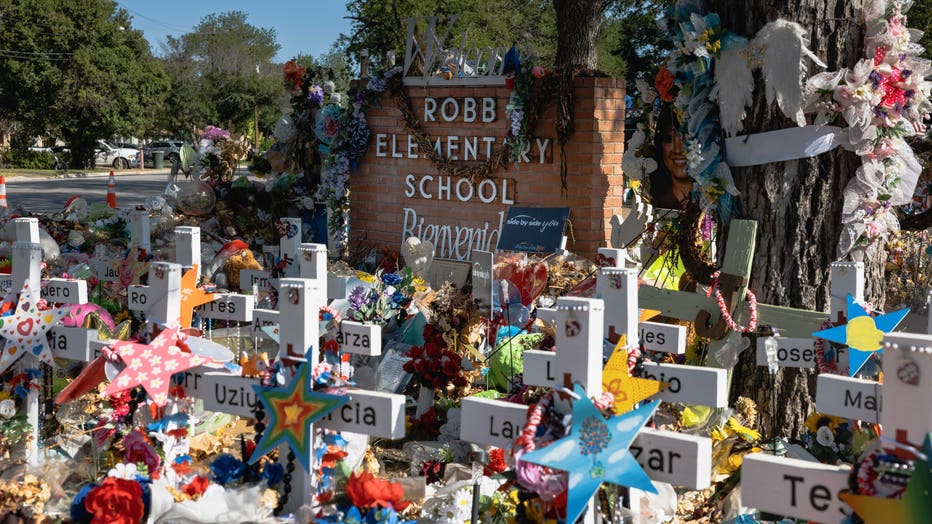 UVALDE, TX - JUNE 24: The memorial for the massacre at Robb Elementary School on June 24, 2022 in Uvalde, Texas. Nearly 300 Uvalde High School seniors received their diplomas one month to the day after nineteen children and two adults were killed at

According to a legislative committee’s report that described a botched police response, nearly 400 local, state and federal officers stood in the hallway of the fourth-grade wing or outside the building for 77 minutes before some finally entered the adjoining classrooms and killed the gunman. Lawmakers also found a relaxed approach to lockdowns — which happened often — and security concerns, including issues with door locks. State and federal investigations into the shooting are ongoing.

The district is working to complete new security measures, and the school board in August fired the district’s police chief, Pete Arredondo. Residents say it remains unclear how — or even if — trust between the community and officials can be rebuilt, even as some call for more accountability, better police training and stricter gun safety laws.

Avila recalls hearing the ominous bursts of rapid fire, then silence, then the voices of officers in the hallway yelling, "Crossfire!" and later more officers standing nearby.

"But still nobody came to help us," she said.

As Avila lay motionless, unable to speak loud enough to be heard, some of her students nudged and shook her. She wished for the strength to tell them she was still alive.

A light flashed into their window, but nobody identified themselves. Scared it might be the gunman, the students moved away.

"The little girls closest to me kept patting me and telling me, ‘It’s going to be OK miss. We love you miss,’" Avila said.

Finally, at 12:33 p.m. a window in her classroom broke. Officers arrived to evacuate her students — the last to be let out in the area, according to Avila.

With her remaining strength, Avila pulled herself up and helped usher students onto chairs and tables and through the window. Then, clutching her side, she told an officer she was too weak to jump herself. He came through the window to pull her out.

"I never saw my kids again. I know they climbed out the window and I could just hear them telling them, `Run, run, run!’" Avila said.

She remembers being taken to the airport, where a helicopter flew her to a San Antonio hospital. She was in and out of care until June 18.

Avila later learned that a student in her class was wounded by shrapnel to the nose and mouth but had since been released from medical care. She said other students helped their injured classmates until officers arrived.

"I am very proud of them because they were able to stay calm for a whole hour that we were in there terrified," Avila said.

As her students prepare to return to school for the first time since that traumatic day, Avila is on the way to recovery, walking up to eight minutes at a time on the treadmill in physical therapy and going to counseling. She looks forward to teaching again someday.

Outside of a shuttered Robb Elementary, a memorial for the people killed overflows at the entrance gate. Teachers from across Texas stopped by this summer to pay their respects and reflect on what they would do in the same situation.

"If I survive, I have to make sure they survive first," said Olga Oglin, an educator of 23 years from Dallas, her voice breaking.

"Whatever happens to a student at our school, it just happens to one of my kids," Olgin said, adding that as the person to greet parents, students and staff at the door in the mornings, she likely would be the first person shot. 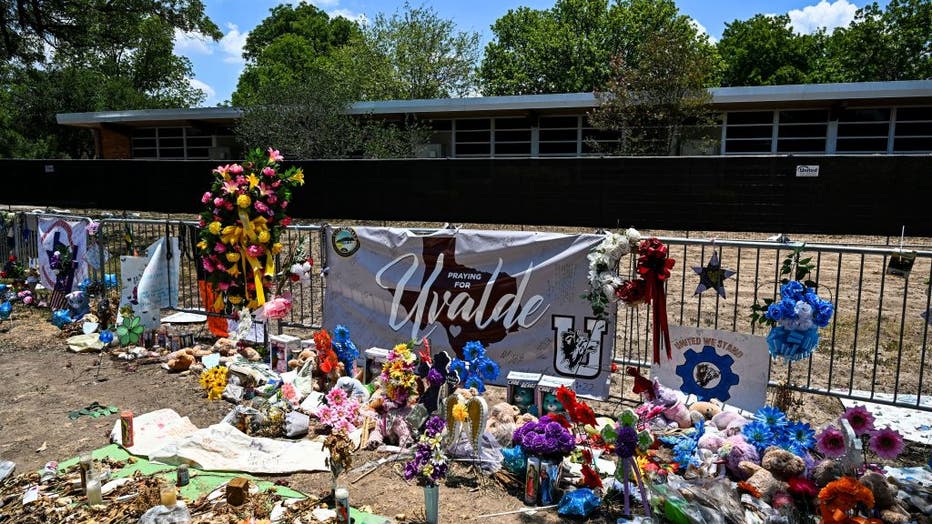 Mementos decorate a makeshift memorial to the victims of a shooting at Robb Elementary School in Uvalde, Texas, on June 30, 2022. - Nineteen young children and two teachers were killed when a teenage gunman went on a rampage at Robb Elementary on May

Ofelia Loyola, who teaches elementary school in San Antonio, visited with her husband, middle school teacher Raul Loyola. She was baffled at the delayed response from law enforcement, as seen on security and police video.

"They are all kids. It doesn’t matter how old they are, you protect them," she said.

Last week, Avila and several of her students met for the end-of-year party they were unable to have in May. They played in the pool at a country club and she gave them each a bracelet with a little cross to remind them that "God was with us that day and they are not alone," she said.

"We always talked about being kind, being respectful, taking care of each other — and they were able to do that on that day," Avila said.