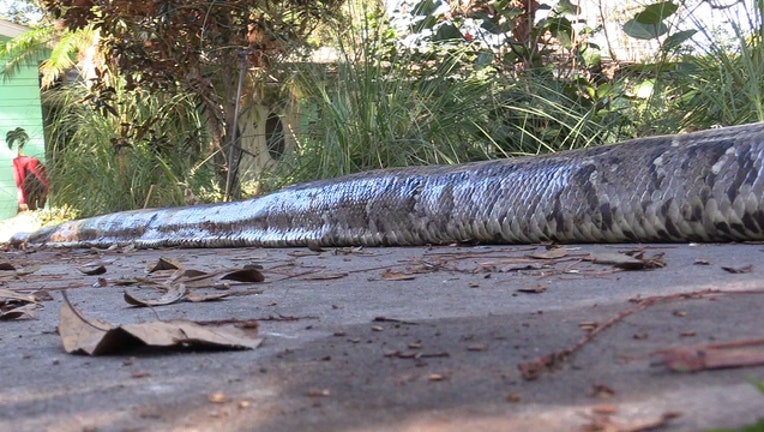 “They've eaten-up the marsh rabbits, the small mice and stuff, and everything that normally eats them is impacted because they can't. The food chain is not there anymore,” said John Hammond, a Florida wildlife trapper.

Hammond caught a 150-pound python in the Florida Everglades over the weekend, and she is a record holder.  Hammond captured the snake as part of the Python Elimination Program.

Workers with Florida Fish and Wildlife euthanized the 18-foot long python, the largest snake that has been taken since the program has been in effect.

“Ran down, grabbed it by the head. When I did that, it constricted me from the waist-down, which was the plan,” Hammond said.

He let the snake tire itself out while he dragged it slowly to his truck. The whole process took about 45 minutes.

With the snake laid-out on the driveway, curious neighbors like Mary Bullard started to come over.

“These things are loose in the Everglades, they don't have any natural enemies and they just keep swallowing-up everything else and getting bigger and bigger. It's another bad thing that's happened to Florida,” Bullard said.

Hammond started skinning the snake, and planning to make good use out of the hide.

“It's domestic leather, and if we can get to using it here, it's not wasted.”

Everglades trappers make $8.25 an hour looking for pythons. They get $50 for any python up to four feet long -- $25 for every foot longer than that. In Hammond’s case, the snake brought him $450.

Python hunters have now eliminated over 1,850 of the snakes on district lands.