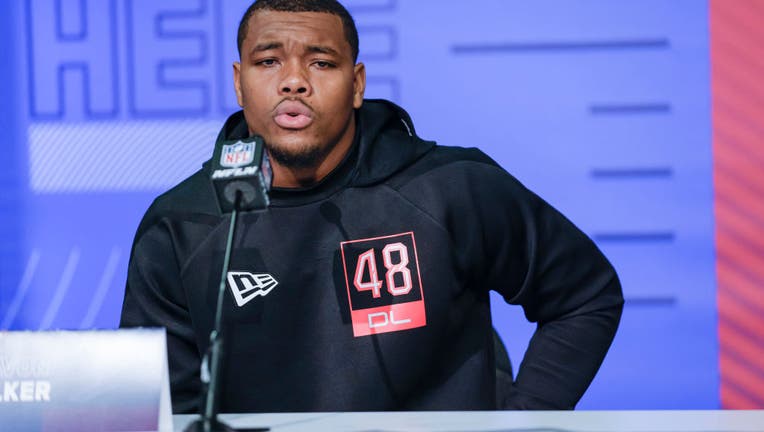 INDIANAPOLIS, IN - MAR 04: Travon Walker #DL48 of the Georgia Bulldogs speaks to reporters during the NFL Draft Combine at the Indiana Convention Center on March 4, 2022 in Indianapolis, Indiana. (Photo by Michael Hickey/Getty Images)

LAS VEGAS (AP) - For the first time ever, six wide receivers have been selected in the top 20 picks of the first round.

The latest are Penn State's Jahan Dotson to Washington at No. 16 and Arkansas' Treylon Burks to Tennessee at No. 18.

The Titans traded former Pro Bowl receiver A.J. Brown to the Philadelphia Eagles to move up to the 18th pick.

Before that, the Texans selected Texas A&M guard Kenyan Green at No. 15, Baltimore took Notre Dame safety Kyle Hamilton at No. 14 and Philadelphia selected Georgia defensive tackle Jordan Davis with the 13th pick.

Picks 10, 11 and 12 were all pass catchers, starting with Garrett Wilson to the New York Jets at No. 10. USC's Drake London was the first wide receiver off the board when the Falcons selected him with the eighth overall pick.

There's a run on wide receivers in the NFL draft.

Picks 10, 11 and 12 were all pass catchers, starting with Garrett Wilson to the New York Jets at No. 10. His skills on sideline passes, plus breakaway speed and an ability to find the end zone all should help a young offense.

Wilson's Ohio State teammate Chris Olave went next to the Saints after New Orleans swapped picks with Washington, which got New Orleans' pick at No. 16.

The Lions moved up to 12 as they swapped picks with Minnesota and they selected Alabama wide receiver Jameson Williams, who played with Olave and Wilson in 2020 at Ohio State before transferring to the Crimson Tide.

The Week 2 matchup between AFC West rivals was announced on Thursday during the first round of the NFL draft.

Amazon will pay $1 billion a season to carry the games for 11 years. Prime Video will carry 15 regular-season and one preseason game. The league announced last week that the complete schedule will be released on May 12. However, international games will be revealed on May 4 with other notable matchups being announced the week of May 9.

Seattle has addressed issues on its offensive line with Mississippi tackle Charles Cross at ninth overall in the first round of the NFL draft.

With good size and length at 6-foot-5, 310, Cross is considered by some scouts the best pass blocker in this draft. The Seahawks like to emphasize the run and probably will need to with quarterback Russell Wilson now in Denver, but Cross is a quick learner.

The Jets used the 10th spot to add to their receiving group with Garrett Wilson of Ohio State. His skills on sideline passes, plus breakaway speed and an ability to find the end zone all should help a young offense.

Receiver Drake London of Southern California, built like a basketball player at 6-foot-5, 210, but truly a football guy, has been taken eighth overall by Atlanta.

The Falcons, who traded veteran quarterback Matt Ryan to Indianapolis in this offseason, are weak at wideout. London joins pass-catching tight end Kyle Pitts, Atlanta’s first choice of 2021, in offering versatility and a wide catch radius.

Not considered a deep threat, he could wind up often in the slot. London had his ’21 season shortened by a right ankle fracture.

He is the first receiver taken in what is considered a very deep group at the position.

Evan Neal, a mammoth 6-foot-7, 335-pounder who has played both tackle positions at Alabama, is the second opening-round pick by the Giants. He’s likely to fit right in with a line that has been a weakness in New York for years.

Neal improved throughout his stay with the Crimson Tide, and his explosion off the snap is exemplary. He started 40 games and missed only one in his three-year career, which ended as an All-American.

The Giants got this spot in a trade last year with Chicago, which took quarterback Justin Fields.

North Carolina State’s Ikem Ekwonu, considered the premier blocker in this draft, has been selected sixth in the first round by quarterback-hungry Carolina.

He is the first offensive player chosen. It’s the first draft since 1991 that no player on offense went in the top five.

Using long arms and mobility at 6-foot-4, 310 pounds, Ekwonu has been a team leader for the Wolfpack. He should start immediately at tackle for the Panthers — and whomever is their starting QB.

Nicknamed "Ickey" after former Bengals running back Ickey Woods by a youth football coach, Ekwonu can get too aggressive at times and had 10 penalties in his career. He probably had three times as many pancake blocks.

Edge rusher Kayvon Thibodeaux of Oregon will be bolstering the pass rush for the New York Giants after being chosen fifth overall in the NFL draft.

Thibodeaux, whose burst off the ball is spectacular, is the fifth straight defensive player taken at the top of these selections. The 6-foot-5, 258-pound mainstay of the Ducks regressed a bit since a terrific freshman season, and dealt with injuries.

But New York, which needs help on the offensive line, saw an opportunity for a disrupter on defense knowing there are plenty of blockers still available.

Ahmad Gardner is bringing the Sauce to the Big Apple.

The Cincinnati cornerback, a major reason the Bearcats broke through into the College Football Playoff last season, has been selected fourth overall by the New York Jets. He wore a brash bejeweled necklace proclaiming his nickname, and even an accessorized chain with a bejeweled sauce bottle.

"I’m the best cornerback in this draft," Gardner noted this week. He went second behind LSU’s Derek Stingley Jr., but the Jets certainly liked him, knowing Gardner did not allow a TD reception in his three-year college career.

Derek Stingley Jr., yet another outstanding defensive back from LSU, has been selected third overall by the Houston Texans.

The 6-foot-1, 195-pound Stingley, who excels in man coverage, was an All-American as a freshman, but injuries, including to his foot in 2021, led to lesser numbers last season.

Still, the grandson of former Patriots receiver Darryl Stingley, who was paralyzed in a 1978 preseason game, has been a coveted cornerback throughout this draft process.

And the Texans need help everywhere.

Michigan’s Aidan Hutchinson, a sack-master whose consistency and relentlessness helped the Wolverines to their first College Football Playoff, is the second overall pick in the NFL draft, by Detroit.

Yes, Hutchinson is staying home as a pro.

The 6-foot-6, 265-pound edge rusher, whose father Chris was a star player at Michigan in the 1990s, was the Heisman Trophy runner-up last season.

He said this week in Las Vegas that he "couldn’t wait until the process is over and I get back to ball." He’ll do so for one of the league’s worst teams in recent seasons.

Edge rusher Travon Walker of national champion Georgia, a dynamic playmaker combining speed and athleticism, is the first overall pick in the NFL draft by Jacksonville.

The 6-foot-5, 275-pound Walker, who has some raw elements to his game but an extremely high ceiling for his skills, joins former Clemson quarterback Trevor Lawrence as the second straight top overall selection by the Jaguars.

Walker, one of several Bulldogs likely to be chosen in the opening round, was a one-year starter whose production (13 tackles for loss and 9 1/2 sacks) doesn’t jump out because he was part of a deep rotation at Georgia. His talent level certainly impressed the Jaguars, the NFL’s worst team the past two years.

Commissioner Roger Goodell began the proceedings by estimating more than 100,000 fans were on hand at the theater built specifically for the draft. Walker was not in Las Vegas.

NFL commissioner Roger Goodell says the league's competition committee has pondered an NBA-like lottery system for its annual draft but he likes it just the way it is.

In a draft-night interview with SiriusXM NFL Radio, host Pat Kirwan asked the commissioner if the league has ever considered a lottery system.

Goodell replied: "Yeah, the competition committee talks about it on a ... regular basis. I haven’t heard it in the last couple years, but I never say never about any of those things. It may come a time where we think it’s appropriate."

Goodell emphasized that the league believes the draft is working fine just the way it is with teams picking in reserve order of finish from the previous season.

Goodell says the NFL's 32 teams are "not into tanking" and that the "league's never been more competitive."

Aidan Hutchinson carried out a sweet surprise for his mother on draft day, gifting a Leo Frost-designed necklace with a dog tag to honor her grandfather and World War II veteran.

He handed Melissa Hutchinson the jewelry on Thursday at the Delano Hotel before hearing his name called at the NFL draft.

The former Michigan defensive tackle also had a matching necklace and dog tag created for himself. His full name is Aidan Joseph Bernardi Hutchinson with middle names that honor his late great-grandfather, who was part of the World War II jungle fighting unit known as "Merrill’s Marauders."

Hutchinson wore Joseph Bernardi’s dog tag against Ohio State during his freshman year, but was afraid of losing it and didn’t wear the memento in a game again. Melissa Hutchinson had her grandfather’s dog tag with her at every game the Wolverines played the past three seasons.

Some teams, including the Jets and Giants, will be particularly busy in the NFL draft Thursday night.

A record eight teams own two first-round picks. That’s one more than the previous high of seven set four times before, including in 2019 and 2020.

The Jets have the fourth and 10th overall selections and the Giants own the fifth and the seventh overall picks.

The Texans are picking third and 13th.

The Packers are picking 22nd and 28th.

And the Lions own the second selection and the 32nd and final pick of Round 1, which they acquired from the Rams last year in the Matthew Stafford trade.

Clayton died in March after a short illness at age 67. Nicknamed "The Professor," Clayton spent more than two decades covering the Pittsburgh Steelers for The Pittsburgh Press and the Seattle Seahawks for The News Tribune in Tacoma. Clayton moved to ESPN and spent more than 20 years working for the network. In recent years, Clayton worked for the Seahawks radio network on gameday broadcasts.

Clayton was awarded with what is now known as the Bill Nunn Memorial Award by the Professional Football Writers of America in 2007. The award is presented annually for long and distinguished reporting on football.

The NFL draft is kicking off in Las Vegas on Thursday night and a record eight teams won’t make their first selections until Friday night unless they trade back into the first round.

The teams without first-round picks are the Rams, Bears, Browns, Broncos, Colts, Raiders, Dolphins and 49ers.

The Seahawks traded away their first-round pick last year, but jumped back into the first round in the blockbuster Russell Wilson trade with Denver last month.

— The Raiders traded a first- and a second-rounder to Green Bay for wide receiver Davante Adams.

— And the Dolphins traded their 2022 first-rounder and four other picks to Kansas City for wide receiver Tyreek Hill.