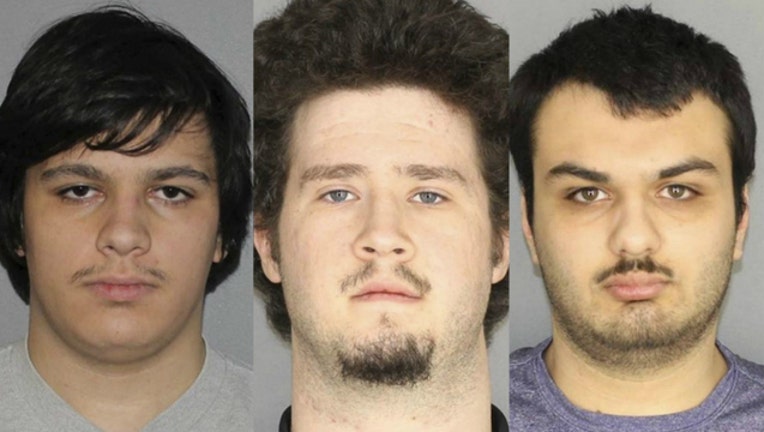 The Rochester-area residents are accused of plotting to attack the small Muslim enclave west of the Catskills, according to court papers.

The timing of the attack was unknown. At the time of their weekend arrests, the men, three of whom were in Boy Scouts together, had access to 23 rifles and shotguns and three home-made explosives, Greece Police Chief Patrick Phelan said at a press conference.

"I don't know that there was a specific date. They had a plan in place," Phelan said.

He did not rule out the possibility of additional arrests.

Charged with weapons possession and conspiracy were 20-year-old Brian Colaneri, 18-year-old Andrew Crysel and 19-year-old Vincent Vetromile. A 16-year-old student at Odyssey Academy in Greece was charged as an adolescent offender.

It was a lunchroom comment by the student during school Friday that launched the investigation.

"He looks like the next school shooter, doesn't he?" the student allegedly said while showing students a picture of another boy on his phone, according to Phelan.

A student who heard the comment "did what we teach kids to do and told somebody," the chief said.

School security and Greece police interviewed both students and others and eventually "uncovered ... a plot to attack an Islamic community in Delaware County, known as Islamberg," Phelan said.

The pictured student was not charged, he said.

Police also searched five locations and seized 23 weapons and numerous electronic devices, including phones and computers. Most of the weapons were rifles and shotguns, some of which were legally owned by relatives of the suspects, authorities said.

"They were homemade bombs with various items - black powder, BBs, nails, inside a container," Phelan said.

It was unclear whether the suspects had lawyers yet. Attempts to reach relatives to comment weren't immediately successful.

"They trusted their instincts and used what they learned in school," she said.

The rural community in Delaware County is operated by The Muslims of America, an indigenous American Muslim organized based in the U.S., which runs 21 others in North America. It was settled by followers of Pakistani cleric Sheikh Mubarik Gilani. The mostly African-American settlers first came to the area in the 1980s to escape crime and crowding in New York City.

Police and analysts have dismissed accusations that the 60-acre community is a terrorist training ground, but the claims have persisted for decades.

In 2017, a Tennessee man was convicted on federal charges for what authorities called plans to burn down Islamberg's mosque in 2015. Robert Doggart, now 67, is serving time in federal prison.

A message seeking comment about the new arrests was sent to The Muslims of America.

The New York chapter of the Council on American-Islamic Relations called for federal charges in addition to the state charges.

"Anyone accused of plotting an act of violence targeting a religious minority should face state and federal hate crime and civil rights charges commensurate with the seriousness of their alleged actions," CAIR-NY Executive Director Afaf Nasher said in a statement.

Phelan credited the students who reported the lunchroom comment with saving lives.