WASHINGTON - The coronavirus crisis threw at least 2.1 million Americans out of work last week despite the gradual reopening of businesses around the country, stoking fears Thursday that the scourge is doing deep and potentially long-lasting damage to the U.S. economy.

Amid a few glimmers of hope, most of the latest economic news from around the globe was likewise grim, as some of the world's most populous countries continued to report rising infections and deaths. The confirmed U.S. death toll topped 100,000, the highest in the world, on Wednesday.

The latest job-loss figures from the U.S. Labor Department bring to 41 million the running total of Americans who have filed for unemployment benefits since the coronavirus shutdowns took hold in mid-March.

There were some encouraging signs: The overall number of Americans currently drawing jobless benefits dropped for the first time since the crisis began, from 25 million to 21 million. And first-time applications for unemployment have fallen for eight straight weeks, as states gradually let stores, restaurants and other businesses reopen and the auto industry starts up factories again.

But the number of U.S. workers filing for unemployment is still extraordinarily high by historical standards, and that suggests businesses are failing or permanently downsizing, not just laying off people until the crisis can pass, economists warn.

“That is the kind of economic destruction you cannot quickly put back in the bottle,” said Adam Ozimek, chief economist at Upwork.

The U.S. unemployment rate was 14.7% in April, a level not seen since the Depression, and many economists expect it will be near 20% in May.

The figures come amid an intensifying debate in Congress over whether to extend $600 in extra weekly federal unemployment benefits, provided under rescue legislation passed in March but set to expire July 31.

Democrats have proposed extending the payments, while Republicans have argued that the extra money could discourage laid-off workers from returning to jobs that pay less than they are getting on unemployment.

Kelly Kelso, a 30-year-old roadie from Nashville for the rock group Foreigner, got her first unemployment check last week after more than eight weeks of waiting. She said she is still receiving far less in benefits than the $1,250 per week or more that she made on tour.

Though she is reluctant to leave the music industry, she said, “I have a cosmetology license. If all else fails, I could go back to doing hair.”

Another looming storm cloud: Economists say the sharp loss of tax revenue for state and local governments is likely to compound the damage from the shutdowns by forcing additional public-sector layoffs in the coming weeks.

Those layoffs have just recently started showing up in the weekly jobless claims report. Washington state, for example, reported layoffs of government employees.

Job cuts are also appearing far beyond the initially hit industries such as restaurants and stores, a sign that the damage is spreading even as businesses reopen. Washington state said it saw layoffs in insurance, and New York state reported job cuts by information technology companies.

Economists say many of the jobs lost are never coming back, and double-digit unemployment could persist through 2021. 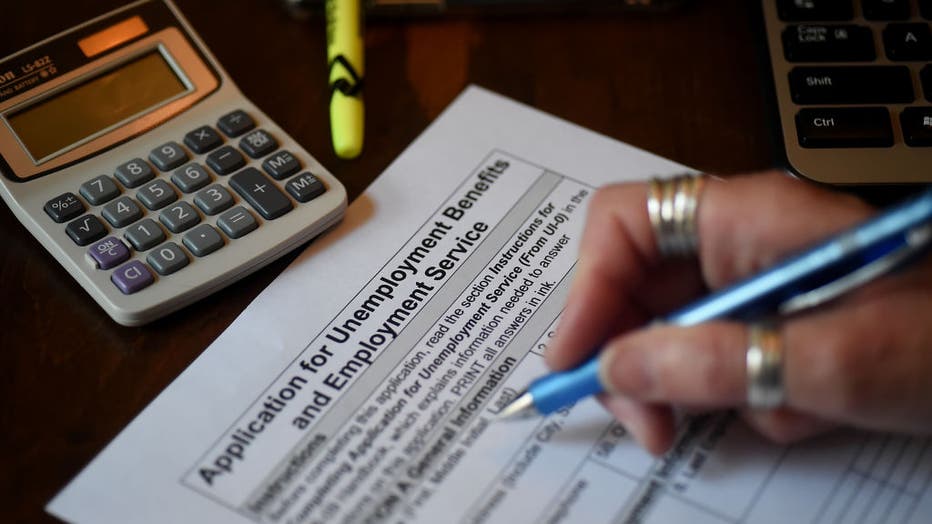 And as discouraging as the numbers are, the real picture may be worse. The government counts people as unemployed only if they’re actually looking for a job, and many Americans probably see no point in trying when so many businesses are shut down.

Airlines and aircraft manufacturers are struggling after air travel plummeted early in the outbreak. Boeing is cutting more than 12,000 U.S. jobs through layoffs and buyouts, many expected to be in the Seattle area. European budget airline Easyjet said it will cut up to a third of its 15,000 employees. American Airlines plans to eliminate about 5,100 jobs.

Amtrak likewise announced it will lay off about 20% of its 18,000 workers amid a collapse in train ridership.

A number of European countries have strong safety-net programs that are underwriting the wages of millions of workers and keeping them on the payroll instead of adding them to the ranks of the unemployed. But the economic damage is mounting there, too.

Nissan is rolling back production in Spain in a move the government said could lead to 3,000 direct job cuts and thousands more losses at the automaker's suppliers. And French unemployment claims jumped 22% in April, with 843,000 more people seeking work.

Elsewhere around the world, India saw another record daily jump in coronavirus cases. Russia reported a steady increase in its caseload, even as the city of Moscow and provinces across the vast country moved to ease restrictions in sync with the Kremlin’s political agenda.

And South Korea reported its biggest jump in infections in more than 50 days, a setback that could erase some of the hard-won gains that have made it a model for the rest of the world.

Worldwide, the virus has infected more than 5.7 million people and killed over 355,000, with the U.S. having the most confirmed cases and deaths, according to a tally by Johns Hopkins University. Europe has recorded about 170,000 deaths.

The true dimensions of the disaster are widely believed to be significantly greater, with experts saying many victims died without ever being tested.

Sewell reported from Cincinnati. Associated Press reporters from around the world contributed to this report.