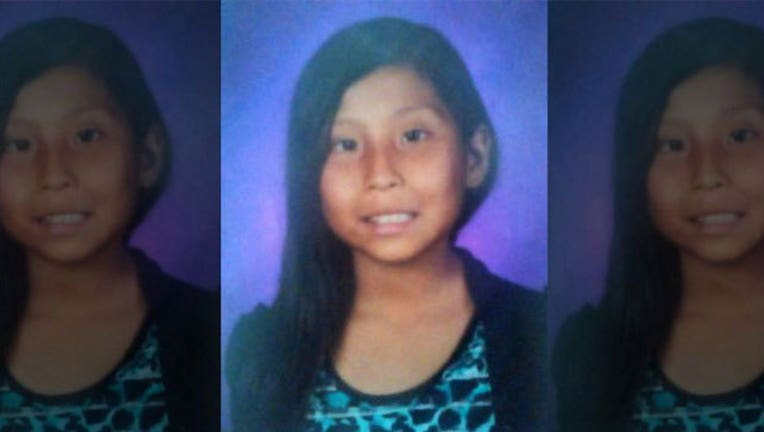 SHIPROCK, N.M. (AP) — A stranger who lured 11-year-old Ashlynne Mike into his van with promises of watching a movie instead walked her into the hills of a remote area of the Navajo Nation, a place known for its breathtaking views and a monolithic rock outcropping that stands as a beacon for miles.

As the sun faded, the man returned alone, with a crowbar tucked in his jacket. The girl was nowhere to be seen.

The girl's 9-year-old brother, who had jumped into the van hoping to protect her — was now distraught and scared. The man drove him toward a highway, and then told him to get out.

Alone in the desert, the boy started to run, and kept running, toward the lights of a distant car, until a passer-by scooped him up and took him to police.

His sister's body wasn't found until the next day, her head bloodied and bashed with a crowbar, according to a federal affidavit released Wednesday as Tom Begaye, a 27-year-old Navajo man from Waterflow, New Mexico, appeared in court on charges of kidnapping and murder.

The case has raised questions about the capacity of authorities to respond to abductions in remote areas of the Navajo Nation. Word of the girl's disappearance sparked a frantic air and ground search, but the immediate hunt was focused on the opposite side of a highway from where authorities needed to be looking, and the 9-year-old struggled to describe just where he last saw his sister.

"He was so tired and just crying and crying for his sister. It was really hard for the FBI to get any information from him," said the children's aunt, Darrell Foster-Joe, as she recounted what the boy eventually told authorities.

The siblings were abducted after being dropped off at a bus stop after school, about a quarter-mile from their home Monday afternoon. The brother and another boy — their cousin — said no to the movie offer, but Ashlynne was somehow lured into the van.

Not wanting his sister to go alone, her brother jumped in too.

Tips flooded in from across the reservation that spans parts of New Mexico, Arizona and Utah. Authorities said the kidnapper was driving a maroon van with a luggage rack but no hubcaps. About 100 people from the community turned out to help look for her.

Begaye made his first court appearance Wednesday at the Municipal Courthouse in Farmington, New Mexico, shuffling into the courtroom with shackles on. He remained quiet as the victim's relatives and other community members watched the reading of the murder and kidnapping charges.

According to the affidavit, Begaye told investigators he removed the girl's clothing, preparing to sexually assault her, and that he hit her twice in the head with a crowbar because she was crying and begging to be taken home.

He also said that the girl was still moving when he left her for dead in the desert, the affidavit says.

U.S. Magistrate Judge B. Paul Briones told Begaye he could face life in prison if convicted of the murder charge.

As he was taken away in an SUV after the hearing, people outside the courthouse yelled "bastard" and "go to hell."

Shawn Mike, Ashlynne's cousin and the father of the boy who stayed behind, said he didn't believe the family knew Begaye. The 9-year-old called him a stranger. Waterflow is a community of about 1,600 people, just a few miles west of the girl's home in Fruitland.

Mike said the man who took the children tried twice to get his son to climb into the van along with them.

"My son said he just waved," he said. "He said the vehicle just sped off, and as it was driving off he just saw Ashlynne waving toward him."

Community members who heard about the abduction via radio and social media congregated to join in the search Monday around 9 p.m. and again Tuesday morning, said Graham Binaal, a Shiprock resident who joined the effort. "Once someone put it out there that there was this missing child, then the word just spread from there," he said.

An Amber Alert for Ashlynne wasn't issued until about 2:30 a.m. Tuesday.

It wasn't clear why it took hours for authorities to get word out about the abduction, and FBI Special Agent in Charge Terry Wade declined to answer related questions during a news conference.

A tribal official, public safety director Jesse Delmar, said Tuesday that "every protocol was followed" in the New Mexico State Police's issuance of the Amber Alert. However, tribal President Russell Begaye said in the same statement that the tribe "needs to implement an effective response system in which modern technology is utilized more effectively."

Begaye is a common name among the Navajo, and the defendant is no relation to the tribal leader.

Heartbroken, the community paused Tuesday night for a moment of silence. Hundreds of residents packed the Navajo Nation's San Juan Chapter House, a tiny community hall south of Shiprock, while hundreds more stood outside of the building in support of Ashlynne's family.

Her father sat silently in the front as the girl's principal remembered her as a kind child who was a part of the school band, and local leaders offered condolences. Ashlynne was fifth-grader at Ojo Amarillo Elementary School in Fruitland. She played xylophone, and had a performance just last week, Mike said after the vigil.

"As a dad, you would like to see your daughter grow up and see her have a family of her own one day. And unfortunately, Ashlynne won't experience any of this," Mike said.