A man was filmed using a racial slur against an Asian woman on a New York City subway, saying kung flu in a reference COVID-19.

A study released by the Center for the Study of Hate and Extremism at California State University in San Bernadino found that anti-Asian hate crimes went up a whopping 149% between 2019 and 2020.

Researchers looked at preliminary police data in 16 major U.S. cities, 11 of which are some of the largest in the country.

In some cities where anti-Asian hate crimes were not being reported as much to police in past years, police reports were found to have substantially increased.

In Philadelphia, for instance, where Asian Americans and Pacific Islanders (AAPI) make up about 7.5% of the city’s population, there was a staggering 200% increase in reported hate crimes against AAPIs. 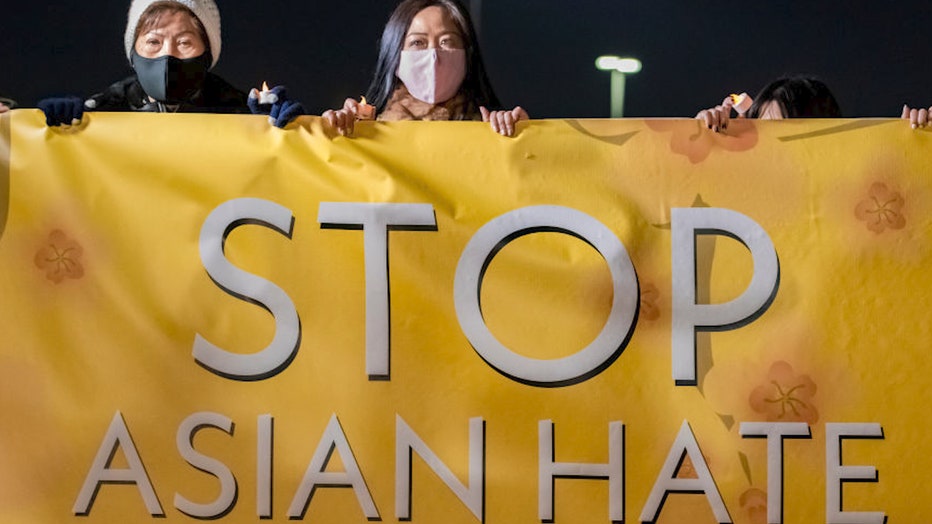 FILE - Members of the Vietnamese community and others hold up a banner against Asian hate during a gathering in Fountain Valley on March 4, to commemorate the one-year anniversary of the COVID-19 pandemic and to bring attention to the growing number

The city that saw the most drastic increase, however, was New York City, where AAPIs make up about 14.5% of the population. New York saw a jaw-dropping 833% increase in anti-Asian hate crimes, according to police data.

The data showed anti-Asian hate crimes in NYC made up more than a third of all reported hate crimes from 2019-2020.

Between March 19, 2020 and Dec. 31, 2020, the data showed AAPIs were being harassed not just verbally but that some were physically assaulted and even spit on.

The study cited data from Stop AAPI Hate that said 14% of reported prejudices against AAPI were physical assaults and being coughed or spit on, totaling nearly 400 incidents. Verbal harassment made up 66% of the overall incidents.

In contrast, hate crime reports overall dropped 7% between 2019 and 2020, the study highlighted, likely due to "a lack of interaction at frequent gathering places liked transit, commercial businesses, schools, events and houses of worship."

The study also shared Google data from March 2020, the onset of the COVID-19 pandemic, that shows searches spiked for racial slurs hateful towards Asian Americans and phrases such as "China virus" and "Kung flu." Around the same time, the Trump administration unwittingly coined these alternate names for the novel coronavirus.

Even after social media and fellow lawmakers reprimanded the former president for his choice of words, President Donald Trump seemed to double down back in March 2020.

"I always treated the Chinese Virus very seriously," Trump tweeted on March 18, 2020, which has since been deleted, commenting on news coverage about his response to the global pandemic that's killed 7,374 people so far. Trump's tweet was one of three he sent out Wednesday morning where he referred to COVID-19 as the "Chinese Virus."

As the pandemic continued to surge, the House voted in September of 2020 to condemn racism against Asian Americans tied to the coronavirus outbreak, approving a Democratic resolution on a mostly party-line vote. Republicans called the legislation an election-year effort to criticize Trump and called it "woke culture on steroids."

The resolution, approved 243-164, called on all public officials to condemn anti-Asian sentiment and to investigate hate crimes after a rise in aggression and violence from those blaming people of Asian descent for the pandemic. The measure did not name Trump but noted inflammatory terms used by him and other Republicans — including "Chinese Virus," "Wuhan Virus," and "Kung flu" — and says they have perpetuated an anti-Asian stigma.

Meanwhile, over the past few months, anti-Asian hate crimes seem to be rising at even more of an alarming rate with several videos surfacing online of AAPIs being harassed, attacked and even killed as a result of the assaults.

Stop AAPI Hate has documented more than 3,000 attacks to date.

In one example, New York City police have opened a hate crime investigation into the assault of a woman of Asian descent riding the subway in Manhattan on Dec. 17.

A group of three men and three women began haranguing the 32-year-old over her failure to wear a face mask on public transportation. The Metropolitan Transportation Authority requires all subway riders to wear masks.

The encounter escalated, police said, and the group began making "anti-Asian statements relative to the coronavirus" and punched the woman in the face multiple times.

In another instance in late February, Salman Muflihi, 23, allegedly stabbed a 36-year-old Asian man in a random attack in New York.

Muflihi pleaded not guilty to attempted murder during a Feb. 27 court hearing. He had been charged with hate crimes, but the Manhattan district attorney’s office is not prosecuting the case as a hate crime, news outlets reported. A prosecutor said at the hearing that the victim remains in critical condition and may not survive.

In Oakland, California, police announced an arrest in the attack and robbery of a 75-year-old Asian man who was out on an early morning walk on March 8. The victim was hospitalized with severe injuries.

RELATED: Asian and Black communities aim to work together after high-profile attacks

The Oakland robbery comes two months after an 84-year-old man from Thailand died from a similar unprovoked attack in San Francisco.

"It’s really been terrifying for our community," said Jo-Ann Yoo, executive director of the Asian American Federation, a New York-based advocacy group. "What is happening is not right."

A full study is set to be released later this month entitled "Report to the Nation: Anti-Asian Prejudice & Hate Crime."

The Associated Press, Storyful, KTVU Fox and Fox 11 contributed to this report.