More than 2.8 million antibiotic-resistant infections occur in the U.S. each year, and the CDC pulls no punches in pointing out that this is just the tip of the iceberg.

WASHINGTON - In recent decades, scientists have consistently warned that humanity was headed full-speed toward an antibiotic-resistant future, and a new report from the Centers for Disease Control and Prevention says we’re well past the point of warning.

Antibiotic resistance is already here in the form of superbugs that have evolved to withstand treatment by the very antibiotics designed to kill them.

Antibiotic resistance, the report says, “is one of the greatest global public health challenges of our time.”

More than 2.8 million antibiotic-resistant infections occur in the U.S. each year, resulting in about 35,000 deaths annually, and the CDC pulls no punches in pointing out that this is just the tip of the iceberg.

"Given the chance, these germs will infect our bodies, take up residence in our healthcare facilities, contaminate our food and water supplies, and move across our communities and around the globe," said CDC director Robert R. Redford, M.D.

The CDC’s 2019 Antibiotic Resistance (AR) Threats Report lists 18 antibiotic-resistant bacteria and fungi, which have been divided into three categories based on the level of concern they present to human health: urgent, serious or concerning.

Clostridioides difficile (which causes colitis, or swelling of the colon, and diarrhea) is the most deadly of the antibiotic-resistant germs on the report’s “urgent” list. In 2017, there were 223,900 cases of C. difficile which required hospital care, causing at least 12,800 deaths.

The 2019 AR Threats Report is a follow-up to the CDC’s first AR Threat Report in 2013, which listed just three drug-resistant superbugs on the “urgent threat” list. This year’s report has added two more superbugs to the “urgent” category.

But Redford says that it’s not all bad news, arguing that “the fight against antibiotic resistance, no matter how complex, is not hopeless.”

Though more germs are developing a resistance to antibiotics, the number of deaths from these superbugs has gone down 18 percent since the 2013 report, in large part due to increasing awareness and improved practices in the medical community and broader public.

One of the biggest issues contributing to the evolution of antibiotic-resistant superbugs is the overuse and misuse of antibiotics in both human and animal populations, which has been proven by countless epidemiological studies.

A 2014 study analyzing the trajectory of antibiotic resistance highlights the surprising effect of agricultural antibiotic use:

A staggering 15 million kg (17 000 tons) of antibiotics are used in the United States every year, 80% in agriculture. This level of environmental contamination is simply unacceptable and will inevitably continue to drive resistance.

— The Future of Antibiotics and Resistance: A Tribute to a Career of Leadership by John Bartlett

Another part of the problem is that germs and bacteria can learn from each other by sharing genetic mobile elements in a process called horizontal gene transfer, which the report notes as particularly alarming.

Basically, antibiotic resistant germs can share their resistance genes with other germs, making them untreatable.

Once a germ becomes antibiotic-resistant, it can then spread from person to person, between people and animals, and it can even be spread in the environment.

The report warns that no one is safe from antibiotic resistance, and stresses the importance of widespread awareness around the issue, especially as resistance continues to spread in community settings where it is harder to catch and snuff out than in hospitals.

“CDC is concerned about rising resistant infections in the community, which can put more people at risk, make spread more difficult to identify and contain, and threaten the progress made to protect patients in healthcare,” the report says.

Stopping the spread of resistant threats in the community will require concerted intervention efforts, such as practicing good hygiene, getting routine vaccinations, practicing safe sex, safe food preparation and a reduction in overuse of antibiotics. 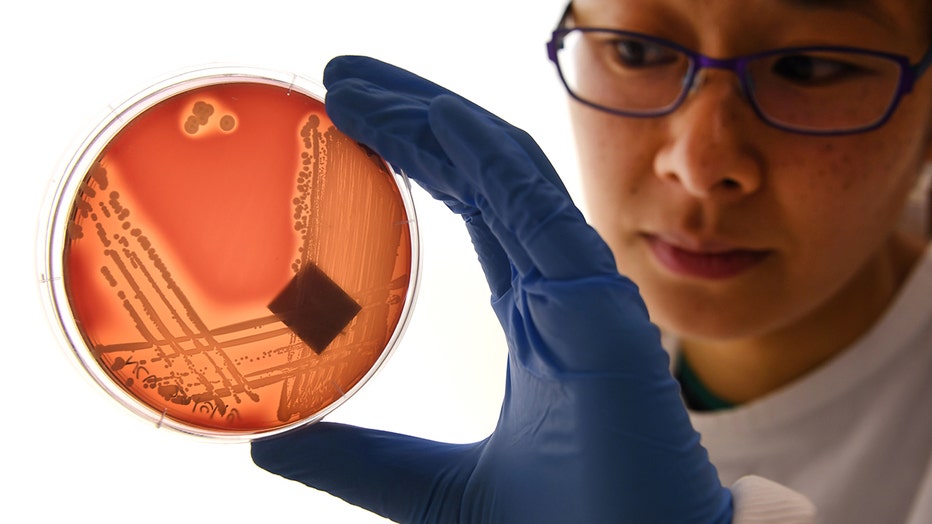 Jean Lee, a PhD student at Melbourne's Doherty Institute, inspects the superbug Staphylcocus epidermidis on an agar plate in Melbourne on September 4, 2018. Infections and deaths caused by antibiotic resistant superbugs are on the rise, according to (WILLIAM WEST/AFP via Getty Images)

So how did we get here?

The discovery of antibiotics was a game-changing medical advancement, revolutionizing health care for both humans and animals and saving millions of lives after widespread use began in the 1940s.

Suddenly, infections that had been life-threatening ordeals became run-of-the-mill illnesses. Add to that the success of antibiotics in treating the infections of soldiers during WWII, and people were convinced that antibiotics were a veritable “miracle drug.”

One of the first scientists to raise the alarm about the limitations of antibiotic treatment was Sir Alexander Fleming, the bacteriologist who created the first antibiotic, penicillin, in 1928.

As far back as 1945, Fleming was warning that overuse of antibiotics was a slippery slope that could allow germs and bacteria the opportunity to get familiar with, adapt to and eventually overcome the drugs designed to kill them.

Pharmaceutical companies opted to create new antibiotics instead of addressing the way they were being used. For the next half a century, new drugs were whipped up to combat resistant strains as they arose, while overuse of antibiotics (especially prophylactic use) continued on largely unhindered.

Almost as fast as new antibiotics are marketed, there evolve a few strains of disease-causing microbes that are resistant to the most potent germ killers. Recently, thanks largely to overuse and outright abuse of favorite antibiotics—especially penicillin—it has seemed that medical scientists were fighting a losing battle. Now British researchers report that the microbes' advance can be checked by rigorously restricting the use of common antibiotics.

A 2014 study attributes this phenomenon, in part, to the Tragedy of Commons, which “results from tension between what individuals perceive as being to their own short-term benefit weighed against a small collective longer-term harm to society.”

Basically, it can be quite difficult to get people to abandon their present self-interest for a greater good in the future.

Now, the CDC says it is imperative that individuals fully grasp and acknowledge the threat facing us if we are to stand any chance against antibiotic-resistant drugs.

"The problem will get worse if we do not act now," the CDC report says, "but we can make a difference."