The incident happened on February 10 in the 2900 block of Rogge Lane and the two officers involved remain on paid administrative leave.

AUSTIN, Texas - The Austin Police Department has released a video of a deadly officer-involved shooting in Northeast Austin. APD had announced in May that it would release the video.

21-year-old Jordan Walton was killed in the incident that happened on February 10 in the 2900 block of Rogge Lane.

Two officers that were involved are on paid administrative leave as the investigation into what happened continues. The officers have been identified as Officer Jeffrey Hutchison and Officer Ryan Nichols.

Some may find the content of this video disturbing. Viewer discretion is advised. The Austin Police Department has released video of a deadly officer-involved shooting that happened on February 10 in the 2900 block of Rogge Lane.

TIMELINE OF EVENTS OF SHOOTING ON ROGGE LANE

Police were called at around 5:18 p.m. to the 2900 block of Rogge Lane about a vehicle that had crashed into a home.

"My whole house shook, that boy had run over my fence and hit my wall in one of the bedrooms and it's totaled, that room is totaled," the resident of the home, Lucy Barcenas, told FOX 7.

As officers responded to the crash, 911 received a call minutes later at a nearby home where the caller said someone had broken into her home.

Officials say Hutchison and two other officers, identified only as Officer Castonguay and Officer Luedtke, arrived at around 5:23-5:25 p.m. to the scene and were wearing uniforms, protective vests, and announced themselves as being police.

The officers reported hearing a crying female voice inside the home along with a male voice and at 5:27 p.m. the officers kicked the front door multiple times and the door opened. 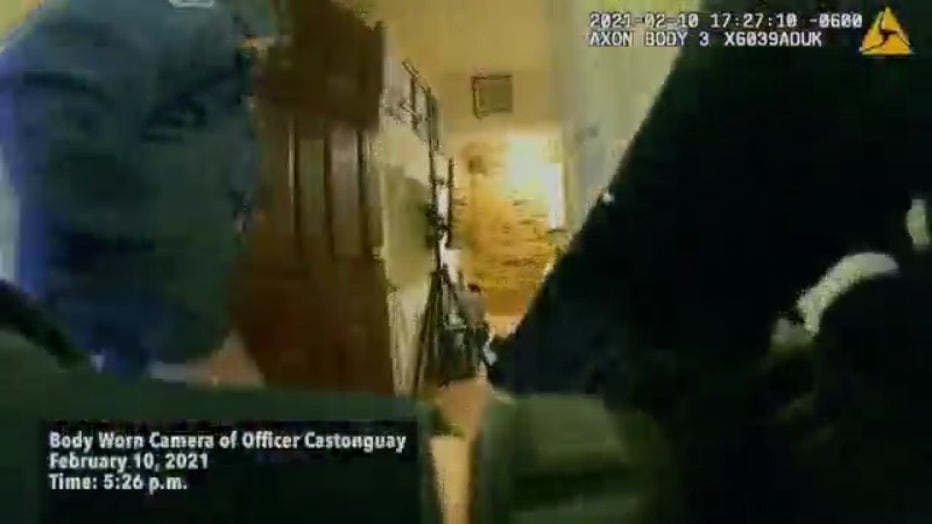 Screenshot from body camera of Austin Police Department Officer Castonguay as officers kick in door of home in 2900 block of Rogge Lane.

Officials say Castonguay and Hutchison were immediately met by gunfire from Walton when they entered. Castonguay's holster was struck by a bullet.

Hutchison returned gunfire and did not hit Walton or anyone else but he was struck in the face by a bullet fragment.

Officials say Hutchison left the house by Castonguay ran across the room to get out of the path of gunfire and remained in the home.

Hutchison announced a shots fired call over the police radio and it was around this time that officials say the female inside began screaming and that Walton said to officers that he would kill "her" if they entered the home.

A hostage situation was announced by Hutchison over police radio and Castonguay was able to exit the home at around 5:28 p.m.

Screenshot from body camera of Austin Police Department Officer Nichols as officers respond to a hostage situation in 2900 block of Rogge Lane.

APD's SWAT team was called to the scene at around 5:40 p.m. Castonguay says over police radio that Walton is holding a child hostage and that Walton is making the child tell officers to come inside.

For the next 20 minutes, police say Walton opens the door several times with the child in front of him and goes back inside the home. Walton also tells officers that he would not hurt the child and that he did not want to hurt the child.

At 6:05 p.m., Walton calls 911 and speaks to a dispatcher. At around the same time, police say Officer Nichols, who had arrived with SWAT, sets up with a rifle on the east side of the home.

At 6:15, Walton leaves the home with the child positioned in front of him as a shield. Nichols fires his rifle and announces over the radio that a shot had been taken and that the suspect was down.

SWAT then enters the home and the child is safely evacuated as well as the female inside.

Walton is pronounced dead at the scene at 6:25 p.m. and police say a gun was found.

"I'm very sorry for his family and him because he was awful young, but then also I still can't sleep," said Barcenas.

Hutchison, Castonguay, and the 10-year-old child suffered minor injuries. The female was not hurt.

A self-proclaimed Black liberation group is trying to establish an 11-mile autonomous zone in East Austin.

In March, the Black revolutionary group 400+1 set up an 11-mile zone in East Austin's Rosewood Park saying it wanted the area to be free of capitalism, state authority, and police. The area included Rogge Lane where Walton was killed.

The co-founder of 400+1, Kristina Brown, told FOX 7 Austin that she believed Walton was not getting the mental health help he needed. She said they established Jordan's Place and Orisha Land as a demonstration against Walton's death and the societal factors they believe led up to it.

The group remained in the area for about a month before vacating.