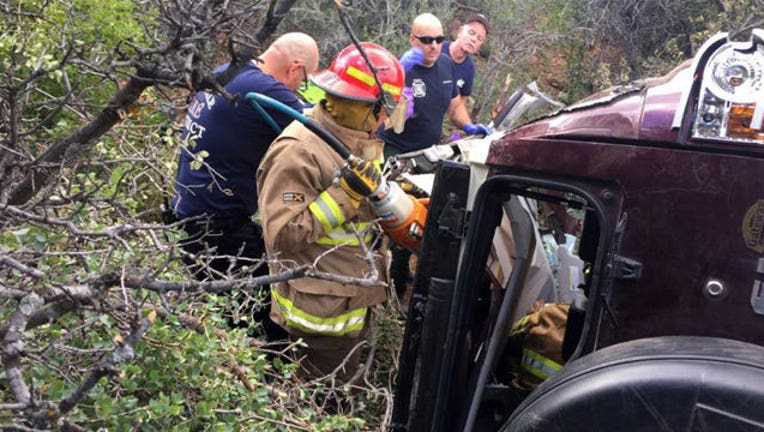 May 27, 2016: Firefighters working to extricate a 50-year-old man from his crashed car on Mingus Mountain in Arizona. (AP)

JEROME, Ariz. (AP) — A man trapped in his crashed vehicle on a central Arizona mountain for three days might never have been rescued if not for a couple taking sightseeing photos, authorities said.

Jerome Police Chief Allen Muma says the 50-year-old man's purple SUV was spotted Friday afternoon by a couple who had pulled over on a road on Mingus Mountain, about 10 miles south of Jerome.

"The big thing I want to get across is how lucky this gentleman was," Muma said Saturday. "These people happened to stop and take a picture. Had they not, he'd be dead. There's no doubt in my mind."

The couple was on Allen Springs Road, which Muma described as an unimproved, dirt Forest Service road and the surrounding terrain has brush between 6 and 10 feet tall. As they started to snap photos, the woman noticed pieces of the vehicle through the mesquite trees and bushes. They went closer and saw a man inside.

It took multiple fire and police agencies more than an hour to get to the man and extricate him using a Jaws of Life apparatus, according to Muma. The roof of the Toyota FJ Cruiser had caved in.

The man, who lives in Cornville, was conscious enough to give paramedics information. That is when emergency responders deduced his car had rolled down the mountain three days earlier.

The couple who found the man happened to have a chainsaw, which rescuers used to help clear the terrain from the car for a waiting helicopter.

He was airlifted in critical condition to Verde Valley Medical Center and then later transported to a hospital in Flagstaff.

The man was listed in stable condition Saturday, according to Yavapai County Sheriff's spokesman Dwight D'Evelyn. The sheriff's office is investigating how the vehicle ended up crashing.

Muma did not know if the man had any water or food nearby. A deputy found his cellphone outside of the car.

The man, whose identity has not been released, has no family so nobody reported him missing.

"If you're going to travel off-road somewhere or even a well-traveled road ... let somebody know," Muma said.